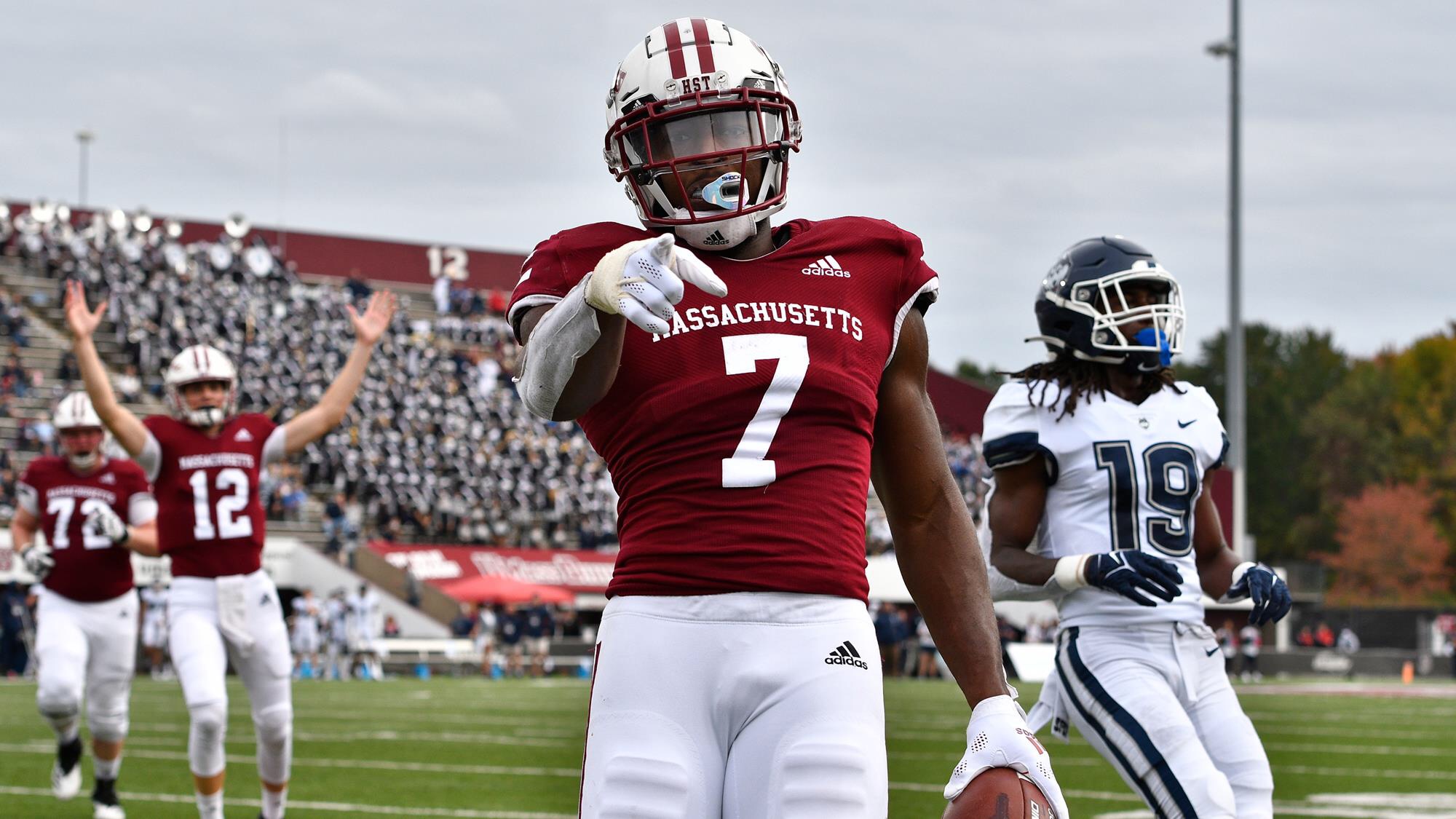 To fans of the UMass football team, star running back Ellis Merriweather is arguably the most recognizable, popular player within the program.

To the folks that work in the athletic department in Amherst, he’s just another student athlete trying to navigate his way through classes, tests and papers, all while being yelled at by Don Brown, Damian Mincey or Steve Casula at practice on a regular basis.

Recently, he’s also been a sponge, trying to learn everything he can about the inner workings of Division 1 athletics while trying decide what he wants to do after football.

Merriweather is a communications major and this summer he’ll be starting a graduate program in the Isenberg School of Management. Arguably the best player in the program, Merriweather has been working closely with Ashlie Santolla (Director of Communications for UMass athletics) among others when he isn’t taking notes during a class or hitting a hole inside the practice bubble.

It’s been quite a learning experience for Merriweather, who just learned how to score a baseball game on Wednesday as part of this daily learning process.

“Working with Ashlie has been amazing, she taught me how to do stats officially for basketball and lacrosse, and I just learned how to stat baseball yesterday,” Merriweather told NEFJ via email on Thursday night. “The hands-on experience is priceless because a lot of people go to school to do what I’m doing and be around the people that I am interacting with on a daily basis. I am seeing first-hand exactly what it takes for game day operation as well as the social media aspect, and the aesthetics of the UMass athletics brand as a whole.”

Merriweather talked about one of his first experiences doing stats for lacrosse recently.

“It was actually pretty easy, learning it only took me about a day,” he said. “I am a sports fanatic, so for the most part I knew what goes on in lacrosse, I just had to pick up on the terminology. I also have a couple friends on the women’s lacrosse team and watching them is extremely entertaining and their team is also very good.”

Merriweather isn’t just using these experiences to build a resumé, he’s also using his classmates’ success as a learning tool for his own career.

“I like to study winners and see what I can take from them,” he explained. “It’s honestly the best of both worlds, because I’m getting hands-on experience with something that I’m interested in, while also watching my friends perform at the highest level possible.”

While the game day experiences have been great, there’s a part of Merriweather that may want to join the “dark side” and become a member of the media. The internship he’s currently in has allowed him the freedom to try all sorts of things until he can ultimately make a final decision. Merriweather seemed like a natural in front of a camera when he joined us for The UMass Spring Ball Special.

“At this point right now, the internship is literally there for me to figure out that question that you just asked,” he said when asked what exactly he wants to get out of these interesting opportunities. “I’ve been exposed to all sides of the communication department within the athletics program. I am really leaning towards media whether that is being in front or behind a camera, or being a statistician.”

Athletic director Ryan Bamford may have some competition soon too if Merriweather chooses to go in that direction. Casula dubbed Merriweather “The Mayor” when he joined us, so AD Ellis Merriweather would probably have a nice ring to it for a lot of fans.

“I won’t sell myself short in possibly being an AD, if I put myself in the right direction,” he added.

Santolla, Hana Johnson and Jill Jakuba are all critical pieces to the every day operation of the athletic department and all of them have helped Merriweather immensely while he pursues this path.

Bringing dogs to work will always make the days better too.

“Ashlie is amazing. She is so kind hearted and she is so passionate about helping me find success. She is so relatable and easy to talk to and she always brings her dogs when she has a chance, I love them,” Merriweather said with a laugh. “Her and the rest of the communication staff have really allowed me to feel confident and comfortable. I feel like I belong and I feel like I have a place within the department even though I still am a student athlete at the moment.

“I feel valued when it comes to Ashlie especially, but I cannot leave out Hana and Jill, and Meredith Reid when she was still with us.”

There’s a very good chance that Merriweather ends up with quite a few eyes on him when it comes to the 2023 NFL Draft if he’s able to produce the same kind of season he had last year. There’s little reason to believe he can’t be an NFL back if he wants to be. If not, don’t be surprised if he’s roaming the sidelines of a lacrosse game or sitting behind home plate during a baseball game sometime in the near future. Or, you may even see him on a TV broadcast.

“The experience has been amazing and has felt so natural along the way,” said Merriweather. “I’m looking forward to more opportunities and will be thinking long and hard about if this is something I want to start a career in.”

Whatever path Merriweather takes, UMass fans can sleep well knowing he gave everything he had to the school not only on the football field, but to the other teams on campus as well, all while chasing his dreams.