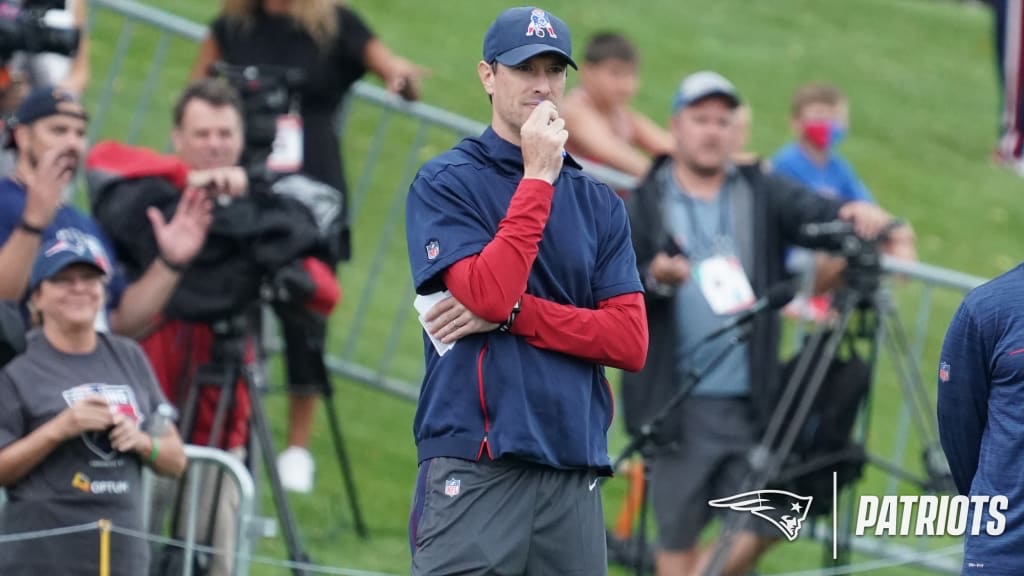 On Friday afternoon, new Patriots director of player personnel Matt Groh met with the media virtually for about 25 minutes, answering a number of questions on a wide range of topics.

With the NFL Draft just two weeks away and a successful draft imperative to the future of this team, Groh had a lot of interesting things to say. Here’s what stood out…

“You’re going to see both those guys I think going in the first round. We’re on top of those younger players from a very, very early stage and we’ve also accumulated a lot of information on some of these players we’ve been covering for a number of years. I think there’s good value across the board. We’ll just try to hone in on the positions and players we think can best help us going forward.”

Groh on the influx of impact WR’s in the NFL the last few years:

“Hopefully it just goes to the overall popularity of the sport. There’s so many more 7-on-7 leagues, those kids are playing that much earlier, refining their route running, catching the ball better, all that kind of stuff. With the growth of the game and the popularity of the game this is what kids want to do, they want to score touchdowns.

“Where football’s at, especially in some of these hot bed areas of the country that’s the cool thing to do. We’ve got a great class of receivers this year and I think it’s just going to keep coming.”

Groh on how other teams and the Patriots are approaching the WR position:

“Wherever teams can add an instant impact player, which is what these wide receivers are in the game today, they’re going to do it. You can’t just sit around and wait and hope to get one of these guys in the draft, you’ve got to be proactive about going to get them.”

Groh on analyzing the cornerback position:

“We’re always evaluating all of our processes and the way we evaluate different positions. There’s never an ‘oh okay, this is the way we do things,’ we’re constantly trying to evolve and adapt and trying to find better ways, more efficient ways to go about that. With the corner position, we’ve been very fortunate to hit on some of those (undrafted) guys.

“Those guys got discounted for one reason or another and we’ve bene trying to look and see why is this player discounted? What can we do to put them in the best position possible to minimize some of those weaknesses…we’ve been very, very fortunate with guys like Malcom and Jon Jones who we’re certainly excited to have here together now.”

Groh on value in mid rounds of the draft this year:

“I feel like that’s a popular narrative every year. We’re always looking for value, no matter where it is. We want our 21st pick to be valuable just like we want our 54th pick to be valuable and kind of commiserate with where we see that player helping our franchise. There is good depth. It’s so easy to just get caught up not he splash names one through five. It’s finding that value for the positions you think – I use the word instant impact for wide receiver – it’s not just wide receivers. Hopefully, your first round pick is coming in and providing something right away, similarly with the second and third round picks.”

“It’s a different game than it was 20, 30, 40 years ago and that player has also changed. There’s not as many of those big linebackers, they just don’t exist. Colleges want them smaller because they’ve got to be able to adapt to the college game. You can’t just create these guys out of thin air. With all these positions, we just have to take what the college game provides us.

“One year there might be a couple high level sam linebackers and other years there might not be any. If you’re looking to try and play with that kind of player, you’ve got to find a way to get that player. Either you’re going to take him higher in the draft than maybe some other teams would or you’ve got to go out in free agency and find that guy. It’s really as simple as there’s not a lot of those guys (bigger LB’s) in college anymore.”

Groh on the DeVante Parker trade:

“Certainly, it got kickstarted on their end with them adding a different player. Then, with where they were at with their wide receiver room and then having the opportunity to add a great player to our roster. They weren’t just going to be able to keep everybody, when a player became available, I would say Matt Patricia did a great job of being in on that early and getting the information to us as quickly as he could.

“We were in on that early and it really came together well for us. Really excited to have DeVante here.”

Groh on relationship building with colleges like Alabama factoring into draft decisions:

“Given Coach Belichick’s relationship with Coach Saban and the amount of relationships we have down there with a lot of people in that building, there’s tons of Alabama players on everybody’s roster, so that’s kind of an easy one. I don’t think I’m saying anything too controversial that they’re the preeminent program in college program the last 10-15 years, so they’re going to have a lot of players in the league.

“Our relationships at any school are really paramount in what we do. That’s really…for a long, long time, that’s how you know a player, is through coaches and from the support staff. All the different people we talk to from the strength coaches to the academic department. We do our very best to try and get to know these kids as well as we can without actually getting to know them, without actually getting the chance to get in a room and spend time with them…if you can eliminate a lot of the questions about a player, it makes you feel a lot more confident about saying “hey, this is a player that’ll really fit in our program.”

Groh on if there is a greater focus on team speed:

“Without a doubt. We’re looking to get faster everywhere. It’s not just defense. It’s offense, it’s special teams, it’s not just linebacker, I think there’s multiple ways to do that.”

Groh on working with Coach Belichick:

“It’s been great. Obviously, coach is the general manager, coach is in charge, he’s been doing this a long time. The more I can learn from Coach Belichick and a lot of the other guys around here I’m going to do that…it’s definitely a collaborative process. It’s been great working with coach, absolutely love it.

“With all the input that he asks from us and just getting his ideas and information he has on these players through his relationships across the country at different schools, it’s been fantastic. I definitely take it as a huge honor given the people I’m working with and the people who have sat in this chair before me. Scott Pioli, Nick Caserio, Dave Ziegler. I think a lot of all those people and really to be in this chair is an honor.”