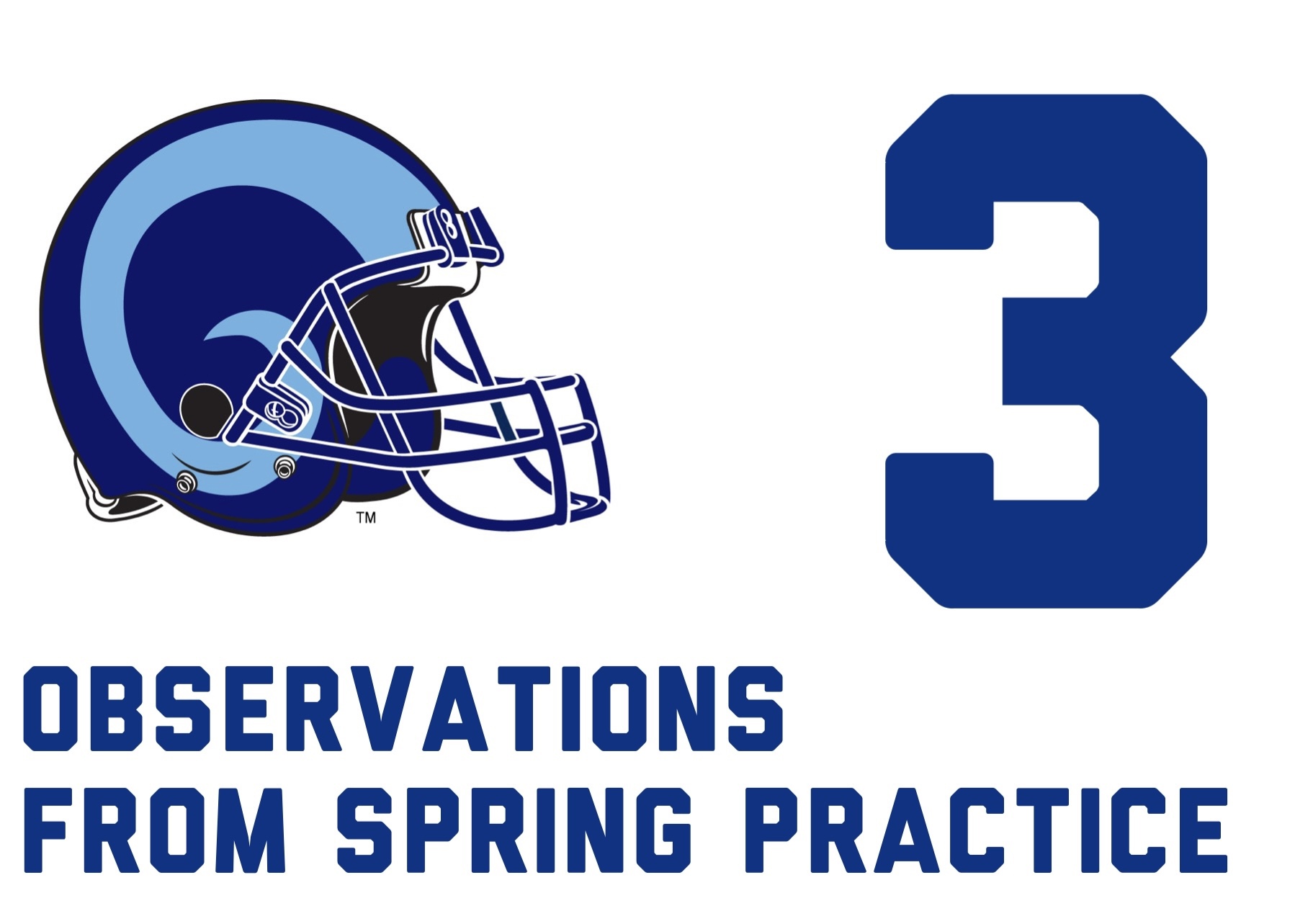 It was a beautiful morning for a scrimmage in Kingston, Rhode Island this morning. The Rams scrimmaged and worked on situational football for two hours. Needless to say, the mood was spirited and there was plenty of contact.

Coming off of a 7-4 season, expectations are high for the Rams heading into the up coming season. Despite that, URI needs to replace several key players on both sides of the ball.

The focus this spring is to develop young guys who could step up and replace them. Head Coach Jim Fleming summed it best when talking about those guys and what they meant to the program.

“We’re going to miss those guys. There’s a lot of experience and a lot of plays made by those guys. We’re going to honor them with a banquet. Fleming added: “Every year is a new team. The chemistry is there. We have the bodies to fill in and do well.”

The Rams certainly do have the bodies. Fleming and his staff have done a terrific in recruiting and using the transfer portal. When you visit the Rams, you see it. There is a lot of talent on the field. They certainly pass the eye test.

Here three observations I made at today’s practice.

1. Kasim Hill looks leaner and ready to build off last season: Quarterback Kasim Hill came into his own last season and blossomed. He had a terrific season and became the starter after splitting reps with Brandon Robinson.

Hill threw for 2,170 yards and 18 touchdown passes. He rushed for 261 yards and 6 touchdowns. Hill became one of the top dual threat quarterbacks in the country but he acknowledged to me that he has plenty to work on.

“This spring I am going to work on my footwork, quicken up my feet. The feet are connected to the mind and the arm so I’m making sure everything is sound and I’m getting ready for the summer.”

Hill is poised for an even bigger season than he had last season. The Rams have a talented group of young receivers that will need to emerge to make that happen. Of course he does have senior tight end Caleb Warren back. Warren emerged as one of Hill’s top targets last season.

Redshirt Senior Paul Woods leads the way but sophomores Jamall Mensah and Jig Williams are poised for breakout seasons as are redshirt junior John Erby and redshirt sophomore Jelani Foster. Incoming freshmen Marquis Buchanan from Classical High School will be another potential impact player at receiver. He is a tremendous athlete.

2. Explosiveness on offense: The Rams made some big plays. Running Back Jaylen Smith finished off an explosive run in a situation period and the Rams were able to some explosives down the sideline.

Offensive coordinator iPatrick Murphy runs a diverse spread attack that features a variety of personnel groupings and can stress a defense with motion. That evident yesterday. The Rams offense put the defense in conflict on several occasions and was able to make big plays.

3. Defense was physical: The Rams take pride on being physical on defense. Yesterday was a prime of example of that as the defense made several physical plays.

The defense gave up some big plays but they pursued well, finished tackles and try to set a tone with their physical play. This is a defense that will be young in some spots but there is plenty of talent on the roster so expect plenty of competition for playing time moving forward.

Last season’s 7-4 record signaled a turning point for the program. Now the Rams are ready to take the next step and compete for a CAA title and more.