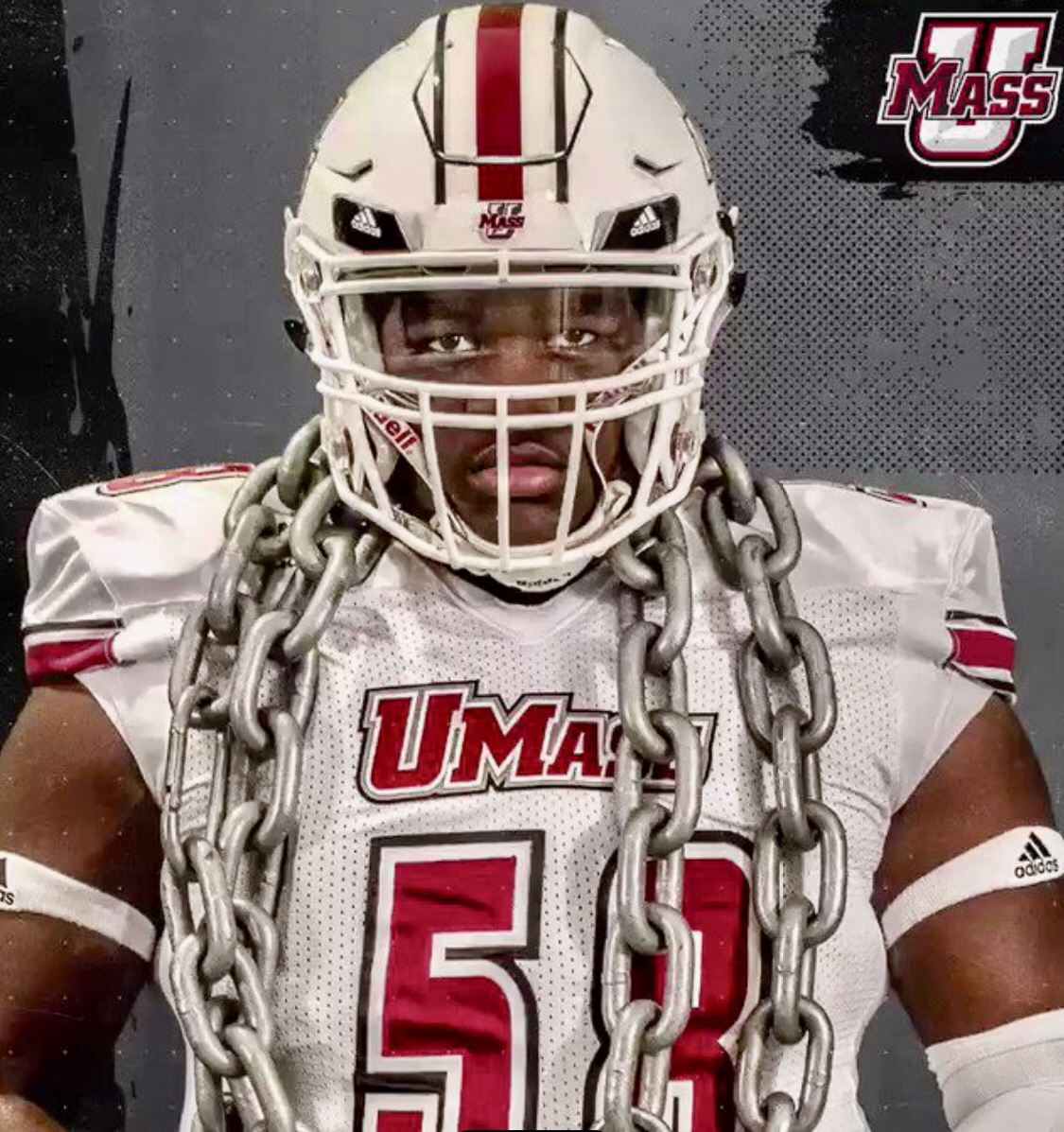 Don’t worry UMass fans, our coverage didn’t stop with our special live show from Amherst a few weeks ago.

For the next couple of weeks leading into the spring game, we’ll be doing a weekly “check in” with the Minutemen to see what coaches and players are saying about the progress the team is making during spring ball. On Tuesday, assistant head coach and special teams coordinator/d-line coach Ben Albert, defensive lineman Cletus Mathurin and defensive line coach Valdamar Brower met the media following practice. Here’s what stood out from each of their sessions…

BROWER ON THE CHALLENGE OF LEAVING SPRINGFIELD CENTRAL

“I’m a real emotional dude. I’m trying not to be emotional today. It was (a hard decision), to be honest, when Coach Brown called, the answer was ‘yes coach, I’m coming right away,’ so, it wasn’t really a happy or sad feeling, it was a yes coach, I’m coming right away. Then, we got into recruiting and holiday break, so just like a lot happy feelings – we had just won a state championship – then I had to make a power point for Glazier Clinic on how to develop a high school football program which is a commitment I had to stay with I had made in October and it kind of hit me emotionally. I missed the kids, I missed the routine, missed a lot of things, but the decision was made and I’m very excited about the decision and that decision is the right one.”

BROWER ON WHAT THE BIGGEST ADJUSTMENT FOR HIM HAS BEEN

“Just the calendar. Coaches are so used to the school calendar and vacations and everything. I came up here for winter workouts when Coach Bell was here and had an idea and then went back to school and did some of that stuff, but with Coach Albert’s experience with the college game, it’s been a great transition. I wouldn’t say easy because nothing easy, but I couldn’t have come into a better experience.”

BROWER ON THE D-LINE PROGRESS

“It’s been great. Obviously, working with Coach Albert, whatever it takes to get the D-line right. The guys have been really involved. They want to be coached up, they want to play, there’s a lot of pride…we’ve got three coaches that want it, the guys that want it, the grad transfers that came in are very excited. We’ve got a great group of guys. The guys that were on the roster want to be coached up and they’re hungry.”


MATHURIN ON WORKING WITH THE NEW COACHES

“It’s been great to be honest with you. They’re teachers of the game first. They break the game down and give you all the answers to make the job simple for you.”

MATHURIN ON GOING AGAINST THE O-LINE

“They’ve been tremendous. I feel like they’ve really improved…going against (Josh) Atwood every day, he’s just a natural. He’s done well playing D-line and I feel like he’ll do well at center too, so it’s like I know going against him every day I’ve got to bring my stuff ready because he’s going to bring it to me.”

MATHURIN ON IF THE D-LINE CAN FEEL PROGRESS BEING MADE

“Absolutely. Coach Brown put us in a situation where he made it tough on us at first. He put a punch of plays at us off the rip, so now that we’ve settled in we’re way ahead of schedule with the playbook. We’ve probably got like 32 plays on offense right now, that’s pretty impressive for week two, week three.”

“We’ve actually bonded pretty well. Once you come here, everybody just sticks together. We want to win. We haven’t won in so long, it’s like, do you want us to keep losing? Or do you want to let everybody come in together and bond to win games?”


ALBERT ON WORKING WITH COACH BROWER AND THE D-LINE

“I’ve worked with T as a player and it’s an honor to work with him now as a coach. I have a great deal of respect for him. You can feel the passion for what he does. You can see him getting emotional when (the media) asked him about the guys at Springfield Central and that’s the kind of person he is.”

ALBERT ON IF HE FOLLOWED THE PROGRAM PRIOR TO RETURNING

ALBERT ON WHAT DREW HIM BACK

“Coach Brown and I, we go back. The last time I had the privilege and honor of working with him at Boston College, we were able to produce the No. 1 defense in the country. He’s one of the best defensive minds in the country and is a great guy. I love him. I love all the guys. We’ve had previously relationships prior to coming back here…our wives stay in contact, this is great man, this is like putting the band back together.”

ALBERT ON IF HE BELIEVES PLAYERS ARE BUYING IN