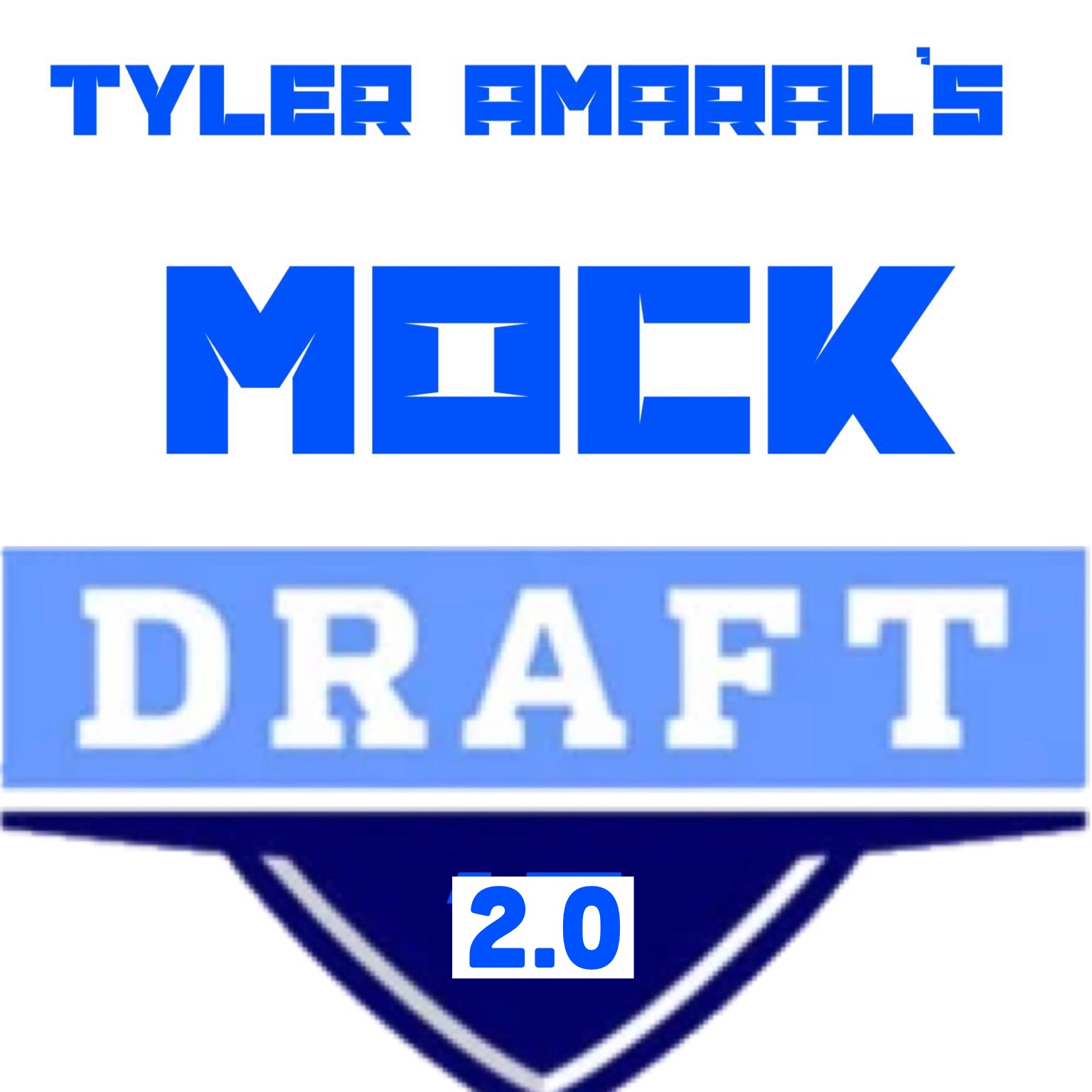 Our Tyler Amaral is back with his Mock Draft 2.0. With the a little more than two weeks away, here is who Tyler thinks will go in the first round.

2. Detroit Lions: Travon Walker, DL Georgia – Lions bet on traits over production here. Walker’s production won’t wow you but that can mostly be attributed to how loaded last year’s Georgia defense was. At the next level Walker profiles as a player that can line up as a 3, 4 or 5 technique defensive lineman.

3. Houston Texans: Evan Neal, OT Alabama – The Texans have holes everywhere. Neal might be safest pick in the draft. He would start his career at right tackle and eventually take over for Laremy Tunsil on the left side.

6. Carolina Panthers: Kenny Pickett, QB Pittsburgh – Offensive line is still a problem but there isn’t a more quarterback desperate team in the league than Carolina.

7. New York Giants: Kyle Hamilton, S Notre Dame – Not a premium position but Joe Schoen and Brian Daboll now firsthand from their time in Buffalo how valuable good safety play is. Giants will have that with Hamilton teaming up with Xavier McKinney. Hamilton’s instincts and football IQ should negate any concerns over his slower than expected 40 numbers.

8. Atlanta Falcons: Kayvon Thibodeaux, EDGE Oregon – Long considered the top prospect in this draft, Thibodeaux has seen his draft stock take a bit of a hit over the last month. Atlanta could have the worst roster in football so they need to take the top player available here.

9. Seattle Seahawks: Trevor Penning, OT Northern Iowa – I believe Pete Carroll will want a veteran quarterback to come in and unseat Drew Lock so quarterback isn’t the pick here. Penning will give whoever is under center a massive blindside presence. Penning is a violent mauler in the run game which should endear him to the run first Carroll.

10. New York Jets: Jameson Williams, WR Alabama – The Jets narrowly missed out on Tyreek Hill so they added the closest thing this draft has to offer. Williams has game breaking speed that should pair well with Zach Wilson’s big arm. Sure Williams tore his ACL in January but the Jets would still be getting four and a half years out of this year’s elite deep threat.

11. Washington Commanders: Garrett Wilson, WR Ohio State – Ron Rivera has said the team needs to surround Carson Wentz with talent. Wilson is arguably the best receiver in this class as he wins consistently at all three levels.

12. Minnesota Vikings: Derek Stingley, CB LSU – Maybe the most talented player in this class. He just hasn’t played much football the last two years. Stingley had an impressive pro day.

13. Houston Texans: Jermaine Johnson, EDGE Florida State – The Texans need to rebuild through the trenches. Coming away with Neal and Johnson would be a home run for Nick Caserio.

14. Baltimore Ravens: Jordan Davis, DT Georgia – The massive Davis is exceptionally athletic for his size. I believe he will be a better pass rusher from the interior in the NFL than he was allowed to show at Georgia.

15. Philadelphia Eagles: Drake London, WR USC  – Jalen Reagor looks like a bust. DeVonta Smith had a solid rookie year but was a bit overshadowed by fellow rookie receivers, Ja’Marr Chase and Jaylen Waddle. London would be the third consecutive Philadelphia first round receiver. London is a big, strong target with plus athleticism as a former basketball player providing a different skill set than Reagor, Smith, Quez Watkins or Zach Pascal.

16. New Orleans Saints: Malik Willis, QB Liberty – Based on what New Orleans gave up to get this pick, I would expect them to move into the top 10 for a quarterback and it appears Willis would be the target.

17. Los Angeles Chargers: Chris Olave, WR Ohio State – Right tackle could be in play here too. Either way I think the Chargers help Justin Herbert with their first selection.

18. Philadelphia Eagles: Daxton Hill, DB Michigan – Philadelphia has interest in Tyrann Mathieu. If Mathieu signs elsewhere Hill would give this defense a similar level of versatility on the backend.

20. Pittsburgh Steelers: George Karlaftis, EDGE Purdue – Karlaftis is a relentless edge defender coming off a nice pro day. He would be a nice compliment to TJ Watt and Cam Heyward on the Pittsburgh defensive line.

21. New England Patriots: Kenyon Green, OL Texas A&M – Green is the most versatile offensive lineman in this year’s class. Bill Belichick will value that versatility. Green would start at guard for New England immediately and potentially slide to tackle if Isaiah Wynn departs next spring.

22. Green Bay Packers: Treylon Burks, WR Arkansas – Green Bay almost has to get a receiver at 22 or 28. Rather than risking the top options being off the board, the Packers grab a receiver with their first pick. Burks is a versatile playmaker who would be Aaron Rodgers’ number one threat from day one.

24. Dallas Cowboys: Devin Lloyd, LB Utah – Linebacker is not the biggest need for Dallas. The addition of Lloyd would allow Micah Parsons to rush the passer more.

25. Buffalo Bills: Andrew Booth, CB Clemson – Buffalo has arguably the best and most well balanced roster in football. There aren’t many holes. One hole exists in the secondary opposite Tre’Davious White after Levi Wallace left for Pittsburgh.

26. Tennessee Titans: Zion Johnson, IOL Boston College – Johnson has guard-center versatility. With Ben Jones back in the fold, Johnson would slot in at guard for the Titans in their smashmouth run first offense.

27. Tampa Bay Buccaneers: Devonte Wyatt, DL Georgia – Wyatt paired with Vita Vea would be a nightmare for opposing offensive lines. Wyatt has a chance to become one of the most disruptive interior pass rushers in the league. He reminds me of Kansas City’s Chris Jones.

29. Kansas City Chiefs: Jahan Dotson, WR Penn State – Even in the aftermath of the Tyreek Hill trade, I don’t think Kansas City needs to force a pick and draft receiver this early. Dotson is a good value at this point in the draft though and would pair nicely with Juju Smith-Schuster, Marquez Valdes-Scantling and Mecole Hardman. Still a ton of speed on this offense.

31. Cincinnati Bengals: Tyler Linderbaum, C Iowa – Linderbaum is exclusively a center with no guard versatility making it tough to find a fit for him. He’s a road grader and plays through the whistle every snap. Cincinnati has said they plan to play Ted Karras at center but they can easily kick him to guard. This completes an overhaul of the Bengals offensive line, giving them four new starters – Linderbaum, Karras, Alex Cappa and La’el Collins.

32. Detroit Lions: Nakobe Dean, LB Georgia – Dean is a three down linebacker with excellent speed and instincts. Detroit would run to the podium if Dean is still there at 32. Concerns over Dean’s size are overblown and truly strange. He’s a similar size to Darius Leonard who is maybe the best linebacker in football.