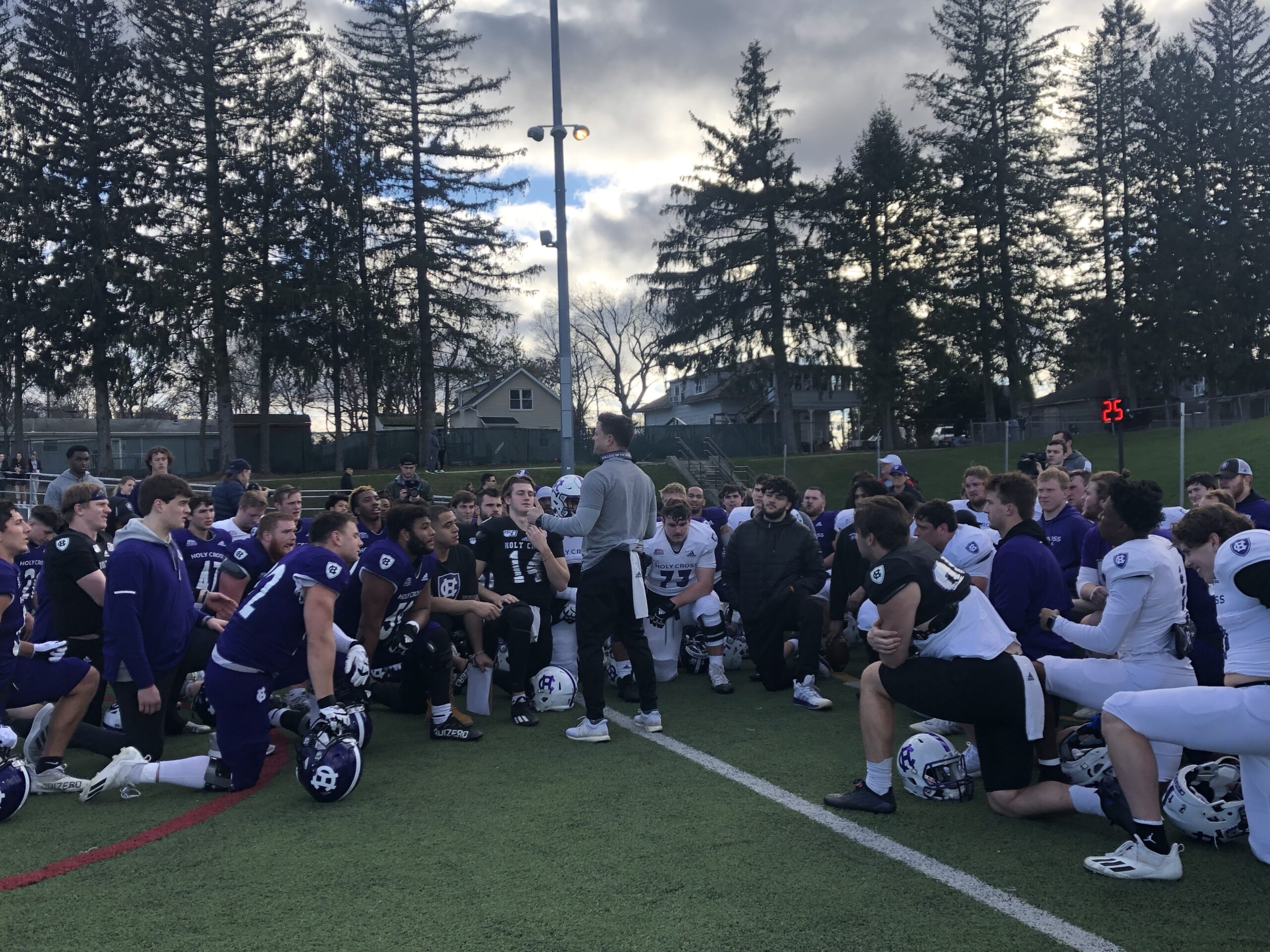 WORCESTER – One of the main reasons the Holy Cross football program has become a true contender for an FCS national title is because of head coach Bob Chesney’s ability to have his team prepared for anything and everything.

There is no greater example than the way the team handled a lightning delay against Fordham last year before winning a third straight Patriot League title. For players, coaches, fans and family members, Saturday afternoon brought up some severe deja vu.

With the spring game scheduled for 3 P.M. and a full day of events taking place throughout the afternoon and evening, the Crusaders were ready to cap off the energetic day on campus following the mens lacrosse game against Lafayette, but Mother Nature, unfortunately, had other plans.

A lightning delay accompanied by driving rain, gusty winds, rapidly dropping temperatures and some hail forced fans inside and the second half of the lax game to be delayed about an hour. Once that finally wrapped up, the defense (wearing purple) and offense (wearing white) lined up at the top of the stairs leading down to Kuzniewski Field just before 4:30.

As the players made their way down on opposing sides in front of a pretty good crowd given the circumstances, there was some playful “it’s over’s” and “you’re done’s” being thrown back and forth. The two-hour, half-game, half-practice was far more competitive and physical than any spring game you’ll see this year.

“When it was said and done, we wanted to see how we called the game together, we wanted to at least involve ourselves in one two-minute situation and we wanted to get into some red zone and goal line, which is what we did,” said Chesney. “There’s some situational football we needed to cover and then we just needed to see different combinations of players.

“We stayed healthy, which is the most important thing when you play against yourselves and I thought, par for the course, talk about adapting and overcoming. We got out here and deal with the rain, put a delay on this, this just continues to add to our resolve.”

There was a pretty wild scoring system in place that gave the offense or defense points for various accomplishments in certain situations that included wide receiver/defensive back 1-on-1’s and offensive and defensive line 1-on-1’s to start the third quarter. Defensive stands, explosive plays on offense and turnovers were all included as well.

“I think we set ourselves up for a great fall,” said running back Tyler Purdy, who had two long touchdown receptions on trick plays during the game. “Just like the Fordham game, we had a little lightning delay there in New York, similar situation. This was a little bit nicer, much better weather (after) obviously, but nothing to us.”

“I think it was a really clean day and I think we got to compete a little bit,” added defensive lineman Dan Kuznetsov. “Those are our teammates, but when we’re going against each other we act like we’re not and it’s awesome to have that fire. Right after that we’re great buddies again, we know we’re teammates, so I think everybody stayed healthy and everybody got better at the end of the day.”

Chesney declared a “55-55 tie” following the final touchdown of the day and easily the most memorable one. Team Impact member Jack Savage was escorted by sophomore running back and North Hampton, NH native/Govenor’s Academy alum Jordan Fuller down field on the final play of the game. With blockers out in front, Savage crossed the goal line with a ball in hand and was quickly surrounded with a jumping, cheering roster of guys thrilled to be part of the big moment.

Sophomore QB Joe Pesansky and Jack broke the team down one final time to end spring ball, capping what turned into a perfect day for the Crusader program.

“Team Impact is a group that we’ve been a part of, that I’ve been a part of for a while at other schools,” added Chesney. “Here we are with Jack getting a chance to come out here and run this final play to close out this spring season.

“We’re excited to have him and his family as part of our program and obviously, a day like that means a lot to all of us, not just Jack.”