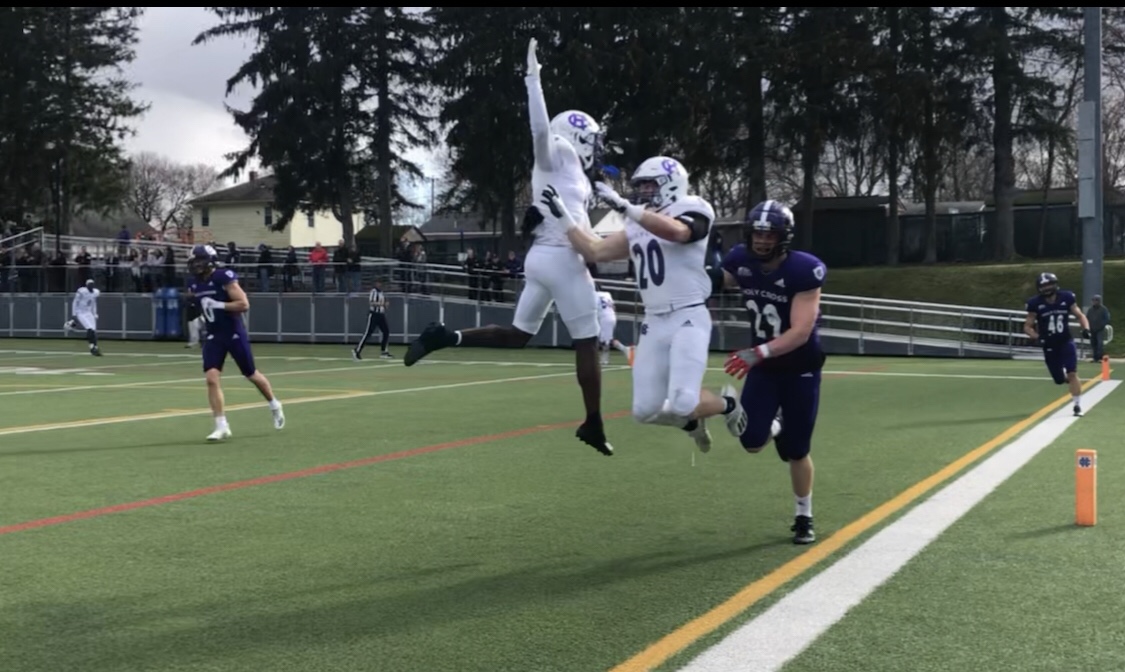 WORCESTER – To say the Holy Cross spring game on Saturday was far more entertaining than any spring game has the right to be would be a huge understatement.

Hard hits, big plays and two straight hours of hard-nosed competition punctuated a successful spring season for the Crusaders. Here are five things that stood out in what turned out to be an eventful afternoon:

Whether it was Matt Sluka or Joe Pesansky, both of them had some great throws on Saturday afternoon. As you’d expect to see in April they each had a few throws they probably want back as well, but with such a talented receiver group and running backs that can catch and run, this offense can be very, very dangerous. Chesney likes to deploy his QBs in unconventional ways, and while that wasn’t obvious by anything we saw this spring, nothing would shock me when it comes to either guy getting chances to make plays.

Speaking of those receivers and running backs, there is some elite talent in both groups. Ayir Asante and Jalen Coker are a threat every time they go out for a route and they both had some extremely impressive catches during the game and during 1-on-1 matchups. Tyler Purdy had two long touchdowns, both on trick plays, one where he was wide open on the back side during a throwback, and another where Coker actually hit him instead of one of the QB’s. Whoever is throwing the ball or handing it off, as long as it’s out quickly, I have to believe you will rarely see negative plays on offense this season. Guys like tight end Jacob Peterson and running back Jordan Fuller stood out too.


3.) The Crusaders have the answer at kicker

With Derek Ng leaving, we mentioned in our preview that it’s a pretty big hole to fill. Well, it feels like Jack Norris is the guy to fill it. He looked good throughout spring ball and was accurate again on Saturday when called upon.

Under new O-line coach Chris Smith, the big boys up front were excellent creating holes for the backs and aside from a few near-sacks here and there, gave the QB’s plenty of time to get it out to those weapons on the outside.


5.) Defense should still be one of the best in the country

D-line, linebacker, defensive back. Every single position can go at least three-deep talent wise and the speed jumps out after watching just a few snaps The Patriot League should be very, very worried about trying to move the ball against Holy Cross again this season. There is a true dog mentality with this unit and they fly around.

Overall, the passion and commitment to finishing what they started with last year’s first playoff victory is as real as it gets. There is an overall focus with this team that you might not find everywhere else in April.