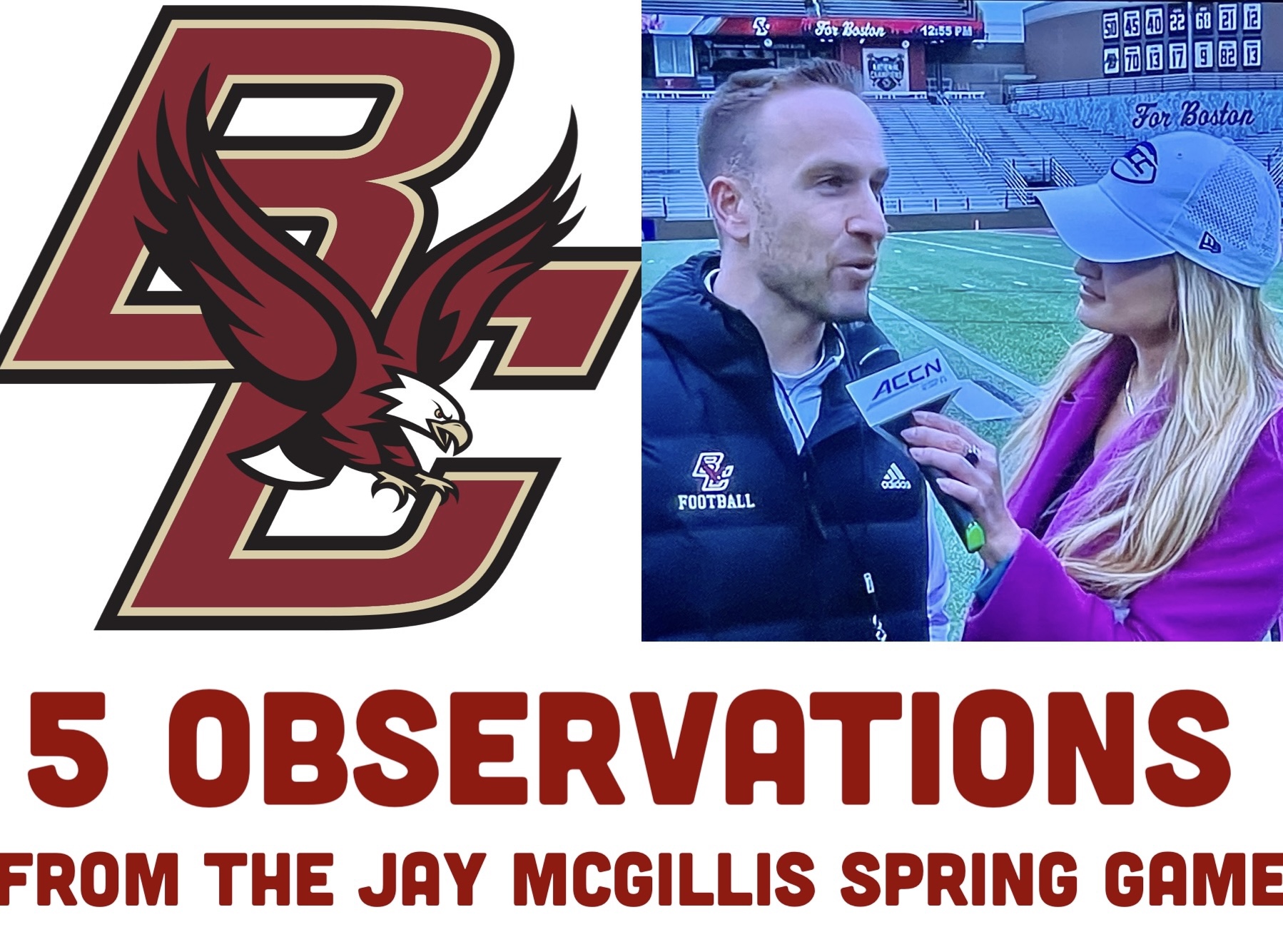 Johnson caught 5 passes for 81 yards. Reynolds caught 5 passes for 51 yards and Coleman caught 3 passes for 75 yards, including a 47 yard touchdown catch. Coleman also rushed for 24 yards on four carries. After the game, Coleman talked about why getting back on the field was important to him.

“The past is the past. We leave the past in the past. I feel like last year definitely was a setback, but it helped me get stronger, and it kept my mindset right.”

Coleman should be a nice complement to Pat Garwo and Alec Sinkfield in the backfield. He gives the Eagles a change of pace back who complements the two upperclassmen well.

Defensive line brings the juice: The Eagles defensive line was much maligned last season for their lack of pressure but today they did a good job of getting consistent pressure on Phil Jurkovec and the rest of the quarterbacks.

With Marcus Valdez and Shitta Sillah both out, defensive ends Ty Clemons, Quintayvious Hutchins and defensive tackle Cam Horsely were a force. They got consistent pressure and were able to collapse the pocket.

Coach Hafley has openly talked about the need to improve the pass rush and it appears that the Eagles have more talent and depth up front defensively.

Veteran offensive line coach Dave DeGuglielmo was hired to replace Matt Applebaum who left to take the offensive line job with the Miami Dolphins prior to the start of spring practice. Coach Guge did a great job getting this group ready in a short amount of time.

Ready for a wrinkle? 🧐 pic.twitter.com/UqaOJITaTM

After the game, Hafley talked about the offensive line.

“I think they did a good job. We kept it simple. Formationally we kept it simple. I thought I D-line strained today. I thought we’d get some pressure. Hafley added: “Overall what I take from this spring is, we’re really strong in the interior and we’re athletic on the outside.”

There will be a lot of eyes on this offensive line going into next season but they passed their first test today.

4. Phil and the quarterbacks looked good: I thought both Phil Jurkovec and back up Emmett Morehead looked good today. They threw the ball on time and with anticipation. Their pocket management was also good considering they didn’t have a lot of time on some plays.

The offense got off to a slow start but picked it up in the second quarter after Jurkovec hit Coleman on the 47 yard touchdown pass.

Jurkovec talked about how the spring has gone for him and his performance in the spring game.

“It’s been good. I’ve been adjusting to this offense. The whole team. We made some good plays. Everybody looked at one time or another during spring ball. Now we just need to put together, go into the summer and see if we could get better.”

When I asked Jurkovec what the adjustment has been like going from Frank Cignetti’s offense to John McNulty’s, he said that it’s different but similar to other schemes he’s run.

“It’s a little bit different but similar concepts to what I’ve run in the past. From high school to college. It’s been similar.”

Jurkovec is primed for a big season. He just needs to stay healthy.

5. Defensive backs impress: The secondary was impressive. C.J Burton, Josh DeBerry and Jaiden Woodbey all made plays. Add Elijah Jones to the mix and this will be one of the top secondaries in the ACC this fall.

The entire group plays with an edge and it showed yesterday. They call themselves the jungle. Woodbey explained why after the game.

Coach Hafley talked about this secondary and their development. He credits defensive backs coach Aazaar Abdul-Rahim with the success of this unit.

“I think Coach Aazaar has done a really good job. I think that has to be one of the strengths of our team. We were the third-ranked pass defense in the country last year. And we need to improve off that.”

Given the Eagles pass rush questions, this secondary will be counted on to support the front seven until they come along. They will. They are too talented and too well coached not to.