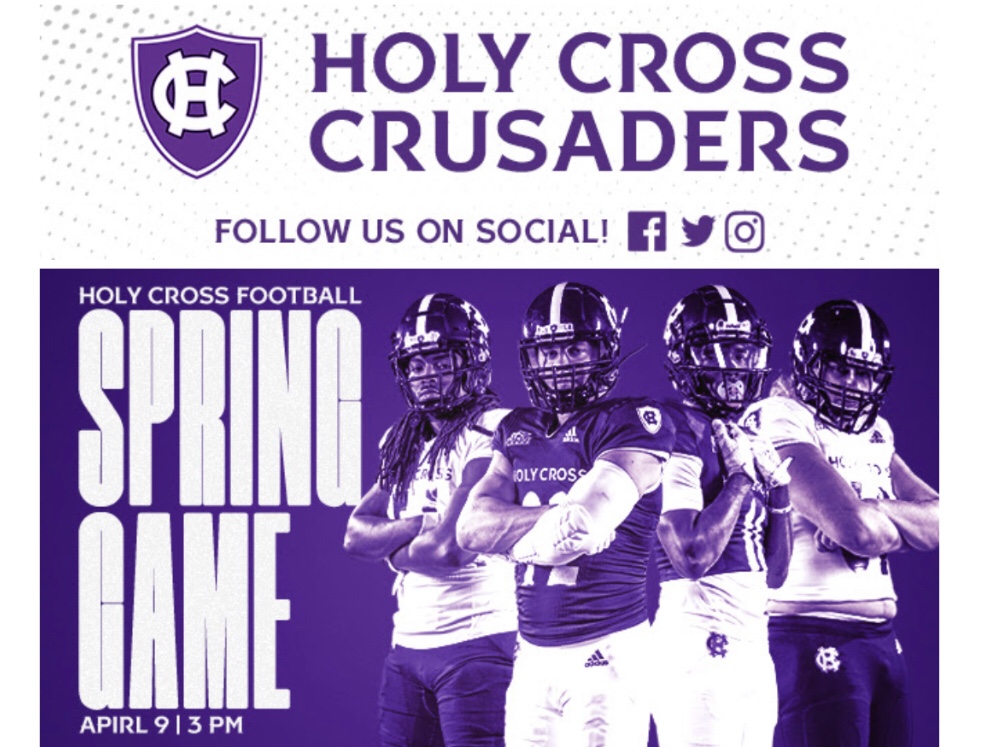 It’s hard to believe, but after Saturday, Holy Cross won’t be on the field in a team setting until training camp starts in a few months.

That’s because Saturday is the Crusaders’ spring game, marking the end of the pre-camp, month-long session that has absolutely flown by. Holy Cross will kick off around 3 P.M. following the mens lacrosse team’s senior day game against Lafayette at noon.

Here are four things we’ll be watching closely when the guys in purple and white head out onto Fitton Field:

Obviously, everyone watches the quarterbacks, but it’s always a little more interesting to see what Coach Chesney does with his group more so than others. Last year, Matt Sluka threw for 1,495 yards and 11 touchdowns with five picks. Marco Siderman saw time last season as well and freshman Joe Pesansky could see some significant action on Saturday. Sluka is probably still “the guy” but you never know who’s popping in when with a Chesney team.


2.) The competition within the wide receiver group

Ayir Asante, takes over as the No. 1 with Tenio Ayeni departing for the NFL Draft. Asante showed he can be elite last season and there are a ton of guys behind him ready to make plays. You don’t see much in a spring game, but talent and speed stand out wherever they are, it’ll be interesting to see what kind of show the receivers put on Saturday.

With Benton Whitley also departing for the NFL Draft, there’s room up front for someone to step in as the lead dog of the pass rushers. Holy Cross is seemingly always set at linebacker and Jacob Dobbs returns for what should be another stellar season. Terrell Prince will lead the DB’s and there should be some good competition within that group too.

Derek Ng decided to enter the transfer portal, which leaves a big hole at kicker for the Crusaders. When NEFJ was lucky enough to have access to a recent practice, Jack Norris looked good kicking field goals in various situations. It remains to be seen if he’s the guy or if the staff has another weapon up its sleeve.

Holy Cross is planning on providing lawn games, food truck, season ticket opportunities and plenty of other things if you’re thinking of spending the afternoon in Worcester. There will also be an autograph session following the game and at this rate, you may end up with a future NFL player’s signature on a football, hat or t-shirt. Perhaps more than anything on the field, it’ll be very interesting to see how much support gets thrown behind the program.

The first playoff win in team history was a special moment inside Fitton Field last season and the support from people around central Massachusetts and really nationally was quite impressive. Chesney recently signed an extension and the talk has shifted from “growing” to “how do we become a national championship contender?”

It’s not a game day, but a big crowd on Saturday will only motivate this program, and it’s already pretty damn motivated.