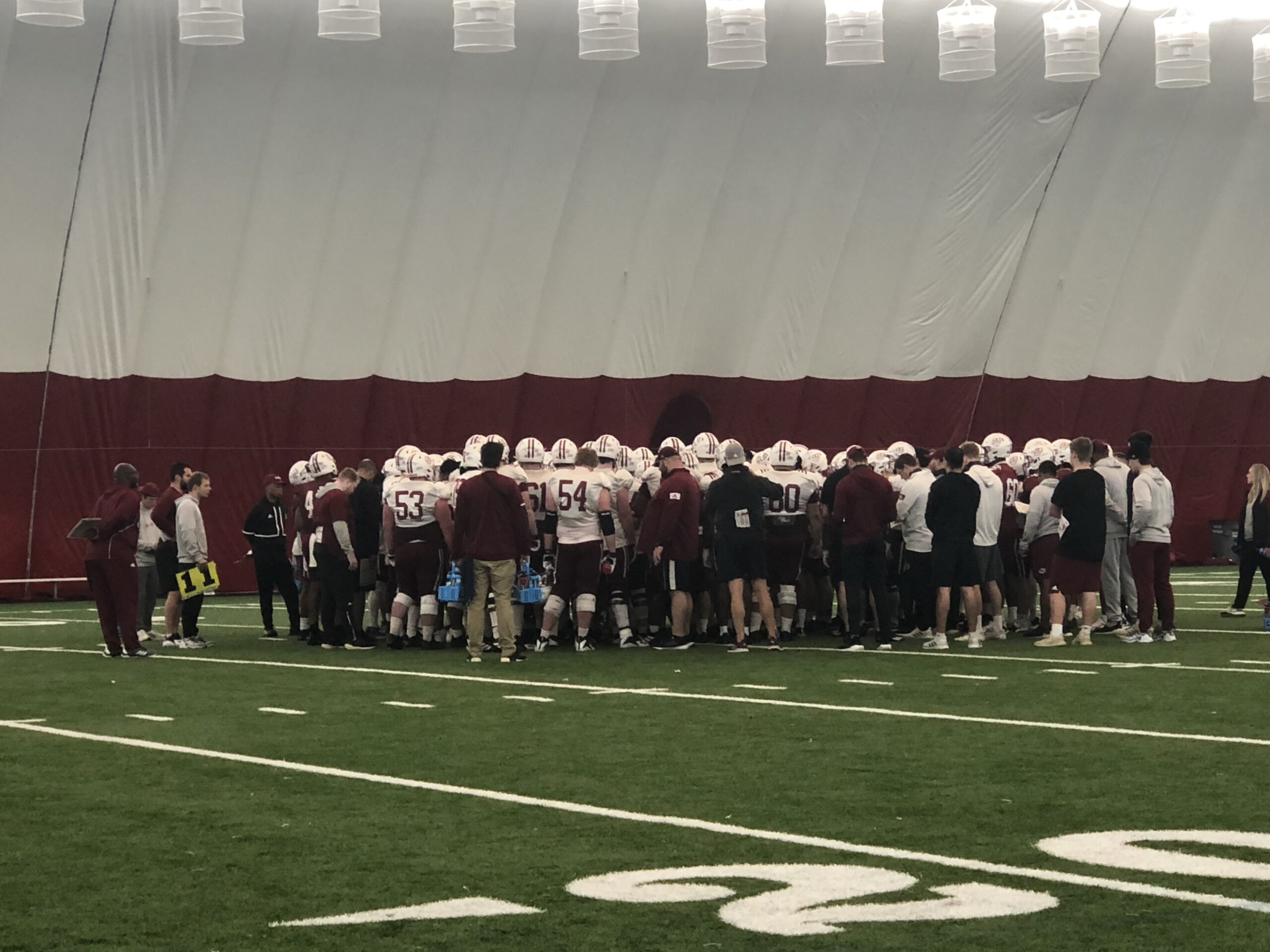 AMHERST – At about 9:55 on Saturday morning inside the practice bubble just outside of McGuirk Stadium, ACDC’s Thunderstruck blared over the loud speakers.

With local recruits and their families on hand, the UMass football team quickly brought the energy level from a 10 to a 15 as the offense and defense split up for some early two-minute work.

By 10:11, Brown called the team together around the 35 and began politely telling his players they needed to pick it up in a calm and clear voice. Ok, so it was obviously the complete opposite and somewhat terrifying, but you get the point.

For the next hour or so, team periods and and one-on-one drills were full of more intensity and a purpose. There were some skirmishes as guys battle for jobs at different positions. At one point, Ellis Merriweather broke off a 70-yard run during 11-on-11 and you would have thought it was a game-winning TD in overtime based on his teammates’ reaction. During wide receiver and defensive back one-on-ones, a big catch or great throw from one of the quarterbacks would get a giant fist pump from offensive coordinator Steve Casula, he even left his feet a couple times to celebrate.

They haven’t played a game yet, but these just aren’t the same Minutemen and it isn’t the same UMass program that no one has taken seriously lately. There is an attitude, a toughness, a certain energy, a lot of grit and a demeanor that permeates throughout the team and the staff.

It’s actually a wildly entertaining process to see unfold, just make sure the kids are in constant “earmuffs” mode if they’re around.

“Coach Brown really doesn’t say too much, so when he brings everybody up like that, we know it’s important,” Merriweather said during the NEFJ UMass Spring Ball Special following practice.

The biggest thing for both coaches and players right now is that the communication is there and everyone is on the same page. The little mistakes made on Saturday (fumbled snaps, poor throws, dropped balls) are easy to fix, it’s the teams pulling in different directions that are bound for failure.

“Coach Brown, he just brings a lot of positivity and he makes everything simple,” added Merriweather. “We really just have to go out there, execute our jobs and have fun. They stress having fun, it’s a big change from last year.

“I think we’re a lot more together as a unit now just with experience. I don’t want to put any shade on any coaching staff, I think Coach Bell did a great job preparing us as well, it’s just that, I think we’ve had time to be together, so we know each other and we’re really just clicking right now.”

Brown had some loud words for his team at the end of practice again before he and the staff quickly turned their attention to the recruits on hand. All of them saw quite a show and got a true taste of what a culture change looks and sounds like.

For lack of a better term, the “football feel” inside the bubble on Saturday was incredible. You would have thought UMass was getting ready to take on UConn with the amount of intensity and passion that was on display.

We can’t stress it enough. These aren’t the old Minutemen.

“Man, that was fun, wasn’t it?” Casula said of the spirited practice. “Very quickly, our team has taken on the identity of our head football coach. Nobody’s got more energy and spirit than him. I think if you watch our team do anything, you feel that.

“It didn’t take very long for them to take that on. The best part is, there’s real back-and-forth…super competitive. That’s the way we want it and that’s the way we like it.”