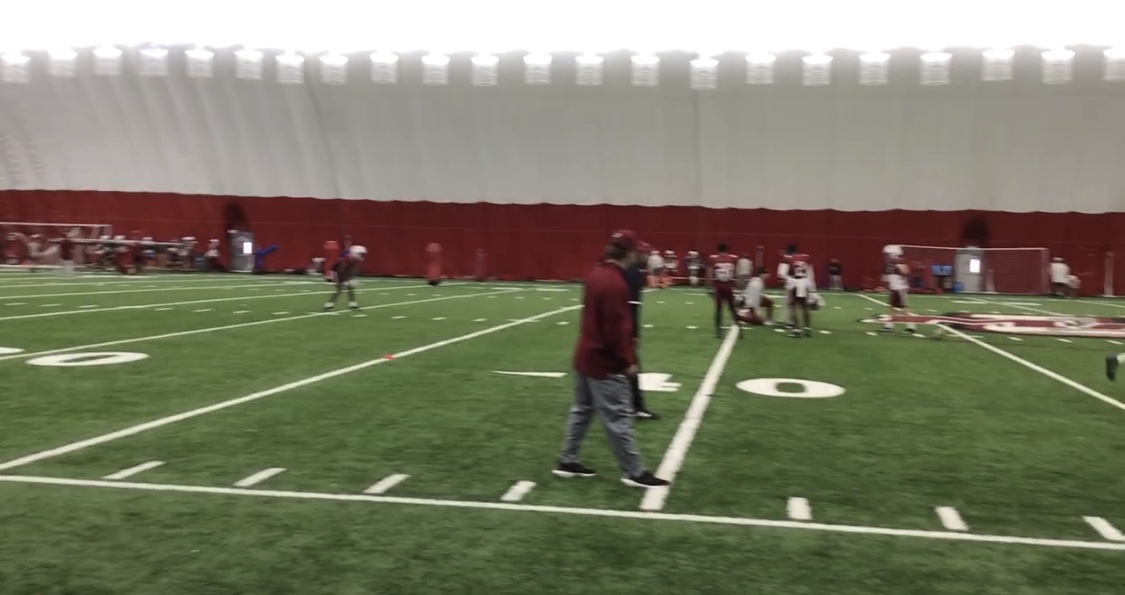 AMHERST — There were plenty of eyes on UMass spring practice on Saturday, and that’s a good thing for the Minutemen.

As the Don Brown Era gets underway in Amherst, the emphasis is on bringing in new and talented players who can help the team win and win now.

Although that is technically always the case no matter where you go, there is optimism in and around the program that Brown is building something special.

We were told as many as six players from in-state — all with UMass offers in hand — were in attendance to watch the proceedings. We spoke with a few of them to get a gauge on their recruitment and how they view UMass.

Overall, the prospects seemed to like what they see. We are confident that — even if they don’t land every one — the Minutemen and Brown have made a positive impression.

Let’s start with the two players from Springfield Central. Class of 2023 offensive lineman Jayden Bass and defensive lineman Josiah Griffin both were in attendance and seemed to be high on the Minutemen.

In addition to UMass, Bass has offers from Akron, Buffalo, Maine, Eastern Michigan, Central Michigan, Army, Navy, Air Force, and UConn. Right now, Bass is about 6-foot-5, 320 pounds, and combines good feet with a nasty attitude when he blocks.

Bass is someone whose recruitment might blow up soon. We still think Power 5 offers could be in his future, but we feel like UMass will be in this until the end. For now, the Minutemen have to feel pretty good about where they sit with him.

His teammate, Griffin, has offers from UMass, BC, UConn, and West Virginia.

He said about UMass, “They’re really organized with everything. I love the coaches.”

Griffin is a 6-3, 235-pound terror off the edge. He also plays tight end in high school, but we see him on the defensive side of the ball at the next level. It doesn’t hurt that the defensive line coach at UMass, Valdamar Brower, is the former Springfield Central coach.

We will see what other schools throw their hat into the ring with Griffin, but UMass will be a player.

Another big-time 2023 player on hand was Jackson Conners-McCarthy of the Brooks School. Conners-McCarthy is a linebacker, and we saw just how good he was last year when he played in The League.

He has a lot of skills that make him a versatile prospect, but he said he sees himself as a nickel outside linebacker who can shift into coverage.

At this stage, Conners-McCarthy has offers from UMass, Buffalo, and Fordham.

One player whose recruitment is starting to skyrocket is offensive lineman Jon Mould from Xaverian. What separates Mould is his athleticism. He runs well and continues to get better as a well-rounded blocker.

At 6-6, 290, Mould is following in the footsteps of Jack Funke, a 2022 BC recruit. Basically the entire Ivy League is after Mould, but we see him as an FBS player, and UMass has offered. At the very least, Mould has plenty of options.

Speaking of offensive lineman, there was another one there in Tim Bruen of Catholic Memorial, who also has a UMass offer.

Bruen is another big body at 6-6, 285. His recruitment is just getting started, and he plays for a program that features many big-time prospects.

Finally, we were told that wide receiver Jesse Ofurie of St. John’s Prep was there, although we did not see him in person.

Ofurie is another prospect who could blow up at any time now. He has the UMass offer, and more should be on the way. What sticks out on film with Ofurie is how good he is after the catch. At 6-2, 195, he’s a big player who knows how to use his size.