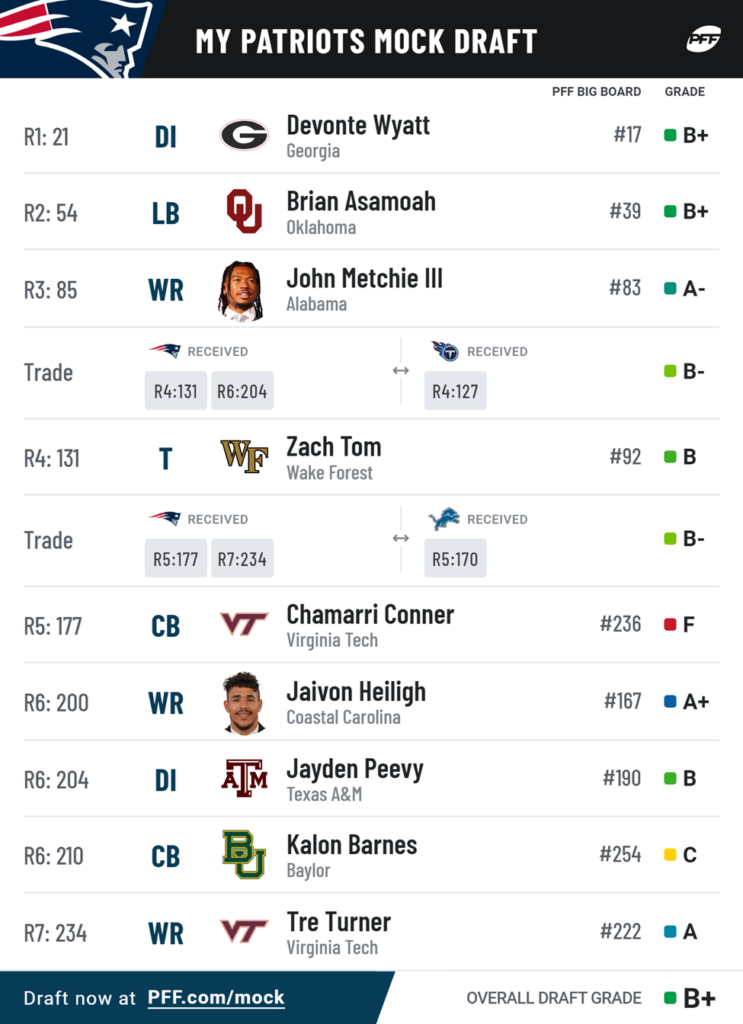 The NFL Draft is now less than one month away. In this mock draft, things turned out quite differently than in my first mock draft. It came out balanced, with five selections on defense and four on offense. It also involved two trade downs.

In the first round, I decided to stand pat and select Georgia defensive tackle Devonte Wyatt. The most famous defensive lineman from Georgia is Jordan Davis, but Wyatt is actually the more explosive of the two and could form an elite pair with Christian Barmore on the New England defensive line. In round two, linebacker Brian Asamoah was the pick at 54th overall. The Patriots need more speed in their linebacking corps and although the addition of Jabrill Peppers as a box safety and having Cameron McGrone on the roster will help that, they still could use more help. Asamoah is a sideline to sideline type linebacker that can cover. He’s exactly the athlete the Patriots need more of at linebacker.

It could be argued that the Patriots two biggest needs are wide receiver and corner. In the third round, Alabama wide receiver John Metchie was available was an easy selection. Metchie is coming off an injury, but he’s an explosive receiver that already has familiarity with Mac Jones. He started 11 games during Alabama’s 2020 National Championship run and 13 games last year before tearing his ACL in the SEC Championship Game. He had 96 catches for 1,142 yards and eight touchdowns in 2021. Metchie can get open all over the field and make explosive plays, something the Patriots passing game needs much more of.

After a trade down to acquire an additional pick, I selected Wake Forest offensive lineman Zach Tom in the fourth round. Tom is listed as a tackle, but projects more as a guard in the NFL. The Patriots need one new guard in 2022 and potentially another new one in 2023 if Isaiah Wynn is not re-signed and causes more offensive line shuffling. Tom could fill one of those spots and has great athletic ability for a player his size.

Chamarri Conner, CB from Virginia Tech, was the pick at 177th overall. Conner needs to add some muscle, but has good speed and could develop into a starting outside corner.

The final four picks in rounds six and seven were two receivers (Jaivon Heiligh and Tre Turner), a defensive tackle (Jayden Peevy) and a cornerback (Kalon Barnes). Of those four, Heiligh and Peevy are the most intriguing. Heiligh is a big outside receiver from a smaller program that has an exciting offense. If he can get more aggressive with his hands he could develop into a solid receiver. Peevy was a four start recruit in high school who ate up space along the Texas A&M defensive line. He could be a rotational defensive tackle with Barmore and Wyatt for the Patriots in this scenario.