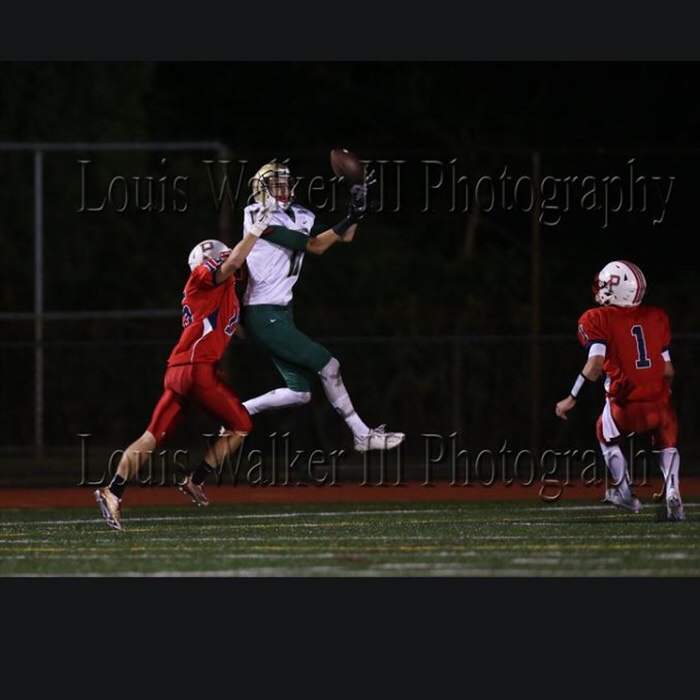 You never know unless you try.

It’s something we should probably all try to live by, but many (including myself) fail to do so. The same can’t be said for former BC baseball player Dante Baldelli.

Baldelli – who played football during his days at Bishop Hendricken in Rhode Island and is the brother of Minnesota Twins manager Rocco Baldelli – played outfield for the Eagles for five years, but it didn’t stop him from trying to reignite the old football flame by participating in Pro Day last week.

Of course, Baldelli couldn’t just show up and say “hey I want to participate in front of dozens of NFL scouts,” so he had to work his way through some connections before eventually getting the O.K. from head coach Jeff Hafley.

“I’ve honestly been thinking of trying to play football since last fall,” Baldelli told NEFJ in an interview Monday morning. “I had to finish graduate school at Boston College last fall, so I stayed in shape during that time. The idea finally gained some traction early this calendar year. I spoke with Coach Gambino about the idea and asked him if he knew anyone I should speak with. He connected me with former BC quarterback Mark Hartsell, then connected me with Rich Fisher, who is a wide receiver coach. I’ve been working with them for the last six weeks.

Baldelli’s legitimate desire to play football again stems from an extremely successful run at Hendricken, a time he looks back fondly on.

“My football experience at Bishop Hendricken are some of the best memories of my athletic career,” he said. “Particularly my senior year there. I also played my freshmen year and joined late my junior year because I had a broken wrist. I would say my senior year was best because I was a part of it for the whole season. We had such a talented team which helped lead us to our sixth consecutive state championship. It was such a tight-knit group and I am so grateful that I got be a part of that team. This was also the year I started playing more and had a good understanding of the offense. I was the X receiver and loved having the ability to run the outside routes of our offense.”

When college decision time came, Baldelli was getting looks for baseball and had dreams of an MLB career (he was drafted in the 39th round by the Phillies in 2016) while the football recruitment process was virtually non existent since he’d only played one season to that point, which made playing for the BC baseball program an easy choice.

“Baseball always felt like that was the direction I would be going in,” Baldelli said. “I started that recruiting process leading into my sophomore year of high school. At that point, I had played one year of football and that was it. It never felt like that was what I was going to do. By the end of my junior year of baseball, I had committed to BC and still had only played a season and a half of football. Even then, football was never in the cards to play at the next level.

“There were a few points during my senior year of football that I would joke around with our OC, Coach Pantaleo, about playing in college, but it was nothing more than that. During this time, I still had aspirations of playing baseball at the highest level, which was something I always wanted to do. I would say the culmination of all of this lead me in choosing baseball.”

One of the biggest reasons why Baldelli decided to show what he could do at Pro Day is the fact that his baseball career is probably finished, but his passion for football has never gone away either.

“At this point, I would say my baseball career is over,” he acknowledged. “Last year, I contemplated trying to play independent baseball, but after a long reflection period I decided it wasn’t something I was interested in doing. After that reflection period, I decided I would try and play football to some degree. I didn’t know how I would go about it, but I knew I wanted to try. I’ve always loved football and been super passionate about it. And most importantly in my mind, I thought I had the ability to give it a try.”

You’d probably never equate the two, but baseball all these years actually helped Baldelli with Pro Day prep, particularly in certain drills that he’s done routinely throughout his career.

“I would say the prepping wasn’t all that different from anything I did for baseball,” he said. “When playing baseball at BC, we had to do some of those specific drills such as the short shuttle and vertical jump. We’d also have to run the 60-yard dash, which was obviously a little longer than the 40 for football. The only drill I would say that was new to me was the 3-cone. I would say I definitely became more confident as the training sessions went on over the last five or six weeks. The repetition of doing these drills over and over gave me confidence that I would be prepared for this day.”

Odds are Baldelli won’t be making an NFL roster, but his willingness and desire to compete at Pro Day is a reminder to all of us that you’ll never know unless you try.

“It was such a surreal day,” he added. “I honestly haven’t experienced anything like it before. In a way, it felt new to me because I hadn’t showcased my football ability in front of so many people like that. Baseball was something I did every day for the last five years. I played games at some of the largest venues in the country for college baseball. But this day still had a different feeling to it because it wasn’t baseball.”