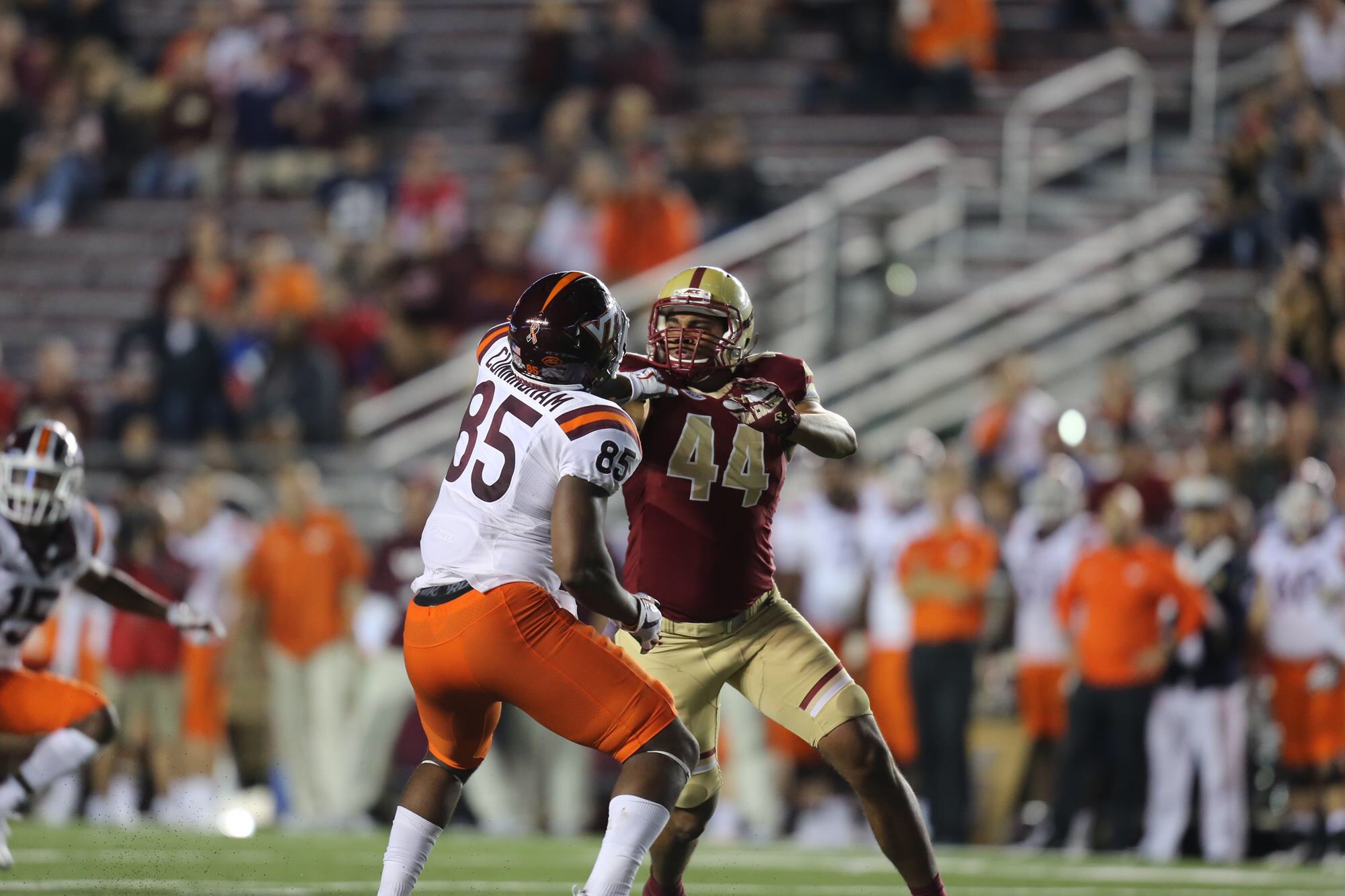 Brandon Barlow has been a leader for the BC defense on and off the field, but on Friday afternoon at the Eagles’ Pro Day, Barlow was just trying to focus on himself.

Barlow was one of 14 members of the 2021 team that took part in Pro Day. Like many of his teammates that may have been flying under the radar, Barlow made an impression on NFL scouts, particularly with his 4.7 40-yard dash, 23 reps in the bench press and a 35” vertical.

“It was a cool experience, BC runs a clean Pro Day,” Barlow said in a phone interview Sunday morning. “I was in Connecticut training for the last eight weeks, and then I finished up last week at BC just making sure I was tuned up for Pro Day.

“I was locked in. I just wanted to make sure I was loose and in the moment and just having fun with the guys I played with.”

If you’ve spent any time around the Eagles since head coach Jeff Hafley arrived, the old cliché of the team being a family could not be more true. Barlow and the rest of the guys knew it was a potential life-changing day, but enjoying time around each other again was almost equally as important as a good performance.

“It was definitely important,” Barlow said. “We hadn’t seen each other in quite a while and we were all pretty close, especially from our last season. Just being able to get on the field at BC one more time and compete, even if it was just against ourselves really with our own results, being able to compere together that one last time was something we were all looking forward to and were preparing for. It was definitely special and something we’ll all remember.”

Barlow watched as teammates from last year Isaiah McDuffie, Max Richardson and Max Roberts all got signed as UDFAs. Having those guys as a resource and an example to follow has been an important part of the process.

“To have those guys as resources and friends to stay in touch with help me through this process, it’s definitely something I’ve taken advantage of and will continue to do so.”

After putting up great numbers at Pro Day on the heels of a 128-tackle, 5.5-sack career across 31 starts at defensive end for BC, Barlow feels like he’s done everything he can to earn a shot at an NFL roster.

“I feel like my Pro Day definitely helped my draft stock a little bit,” Barlow said. “Just because I was able to go out there and really show how I can run, jump and lift in front of every team that was there. I think I showed a little bit of my versatility and ability to play linebacker and special teams as well as d-line.

“Happy with what I did and ready for the next step.”

Before that next step, Barlow will continue training in CT. The NY native will also be looking to continue getting his name and face out there as much as possible.

“I’m going to be heading back home for a little bit to Albany, NY and I’ll be training there leading up to the draft, looking at some local area days for the New York Giants coming up in early April,” he explained. “Hoping to get into one of those to raise my exposure, then just working on football stuff.

“We’ve been working on all the stuff for the combine, but now it’s a different type of training. I’ve been looking forward to this phase because football is what I do. I’m just looking forward to improving my game, so when the time comes I’ll be ready to impress.”

Whoever takes a chance on Barlow won’t regret it.

“They’re getting a hard working, dedicated kid who doesn’t cause any problems and is going to give you everything he has every day,” Barlow said emphatically. “I feel as if I’m a really smart player on the field. I can take the schematics and nuances of the game and apply it on the field after just a few meetings.

“I’m a versatile athlete that can go out there and play hard, fast and physical. I’ve got a nose for the ball. I’m just looking for an opportunity to play with any team and I think I’ll be able to show them that in person. For now, I’m just going to keep my head down and work until that day comes.”