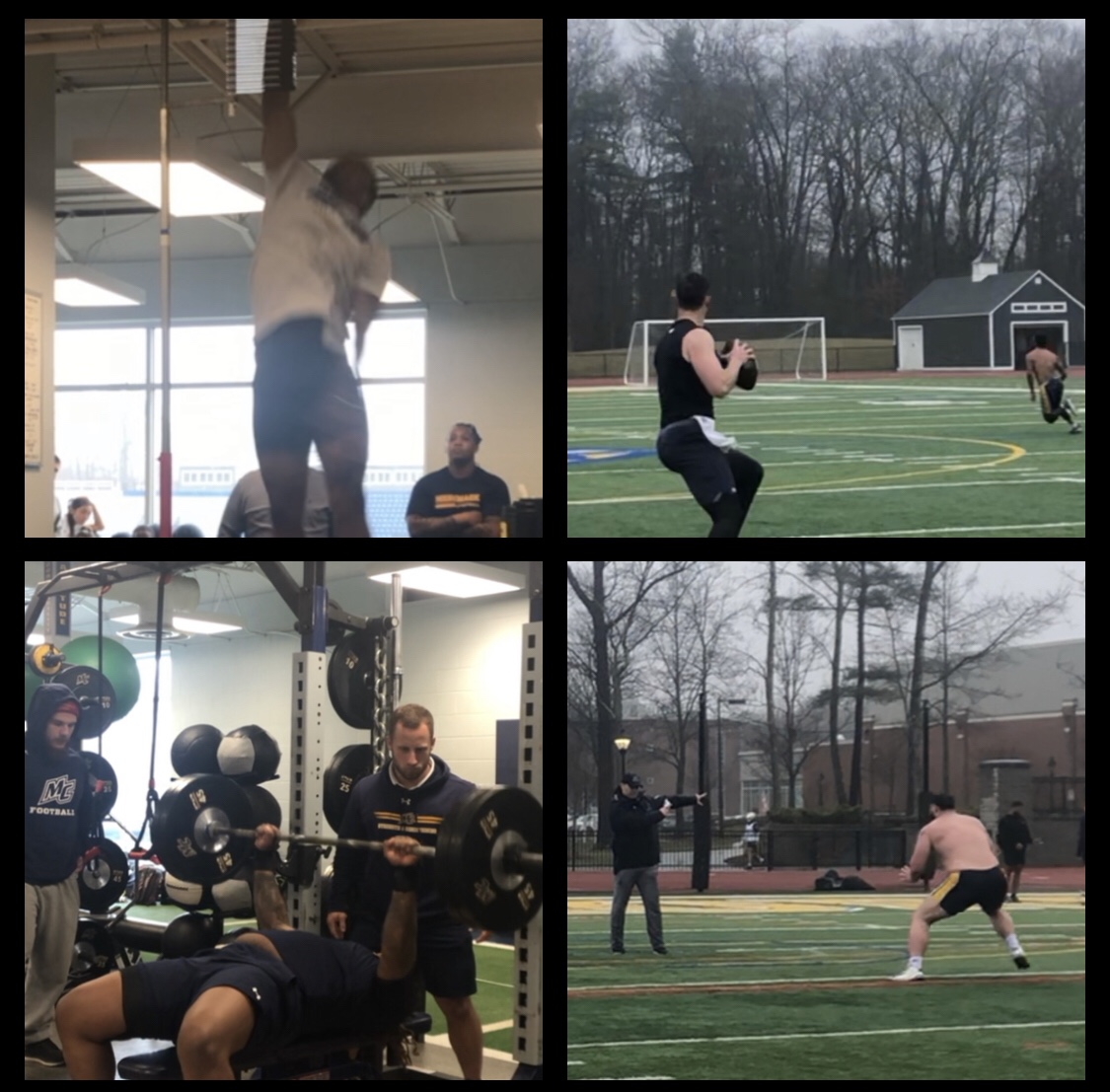 NORTH ANDOVER – Nine guys got to live out their childhood dream of sorts on Thursday afternoon, it was just nothing like they envisioned.

Merrimack College held its Pro Day outside in the most miserable of New England weather after the group voted to go out and deal with the elements.

“I thought it was everything I expected it to be, just a great opportunity to come out here and show the scouts what I could do,” said Legault, who did everything but the bench and looked impressive moving around.

“It was definitely everything I expected it to be, the atmosphere, the team, just getting one last workout in not only with the team, but the coaching staff, the scouts, it was a great opportunity, a great experience,” added Page. “Like Clay said, it was great living out a lifelong dream that I’ve had, being able to live it out and have a Pro Day of my own.”

Elliott was asked by a Chiefs scout running some of the day’s proceedings if he wanted to throw with or against the wind prior to his throwing session. Elliott didn’t really have a preference, so the scout helped him out a bit after jokingly yelling “take the f’n wind!” Elliott did and ended up having a strong session with Spence, Beck, Davilla and Bury all showing they can run and catch in poor weather.

Spence in particular was impressive, making several tough catches on the sideline, but all four guys popped a bit.

“I didn’t picture it’d be raining,” Elliott said with a smile when asked if this Pro Day was what he always had in mind as a kid. “It was unbelievable. Got to go put on a show one last time in Duane Stadium in front of guys that make decisions and have an opportunity to change my life, so I couldn’t be more excited for that.”

Holden had himself quite a day and was easily the most impressive player in the group. Holden showed off with a 4.4 40-yard dash and a 39.5 vertical. He was also very smooth and fluid during drills and despite only being 5’8, should get some looks and an opportunity the summer.

“It was just fun,” he said. “Anything that involves football is just fun. It’s a once-in-a-lifetime thing, I trained three months for the one day, so I just had a great time with the experience talking to scouts and things like that. It was awesome.”

Beck is also an extremely interesting story. The Assumption H-Back was actually catching balls from EJ Perry at the Holy Cross Pro Day on Tuesday, then was right back at it in the elements with Elliott and the others on Thursday.

Why do two Pro Days in a four-day span? Exposure, obviously.

“It was an unbelievable experience being at both the Holy Cross and Merrimack’s Pro Days,” he said. “Just having the opportunity to get in front of scouts and show them what you got is a blessing, opportunities like these are once in a lifetime. That’s exactly why I did both this week, more time in front of the scouts and time to show them my hands and route running ability.  I’d like to say thank you to Coach Chesney and Coach Curran for giving me the opportunity to compete.”

Now that the day has finally come and gone, guys can relax a bit and get back to regular workouts instead of combine-specific ones. There’s about a month until the draft and anyone of these guys could very well hear their names called, but for now, it’ll be nice to take a bit of a mental break.

“I haven’t stopped for a year now,” Elliott added. “Went straight from football season, to All Star games, to prep and now you’re getting to the draft, so I just want to go see my family a bit too, that’ll be great.”