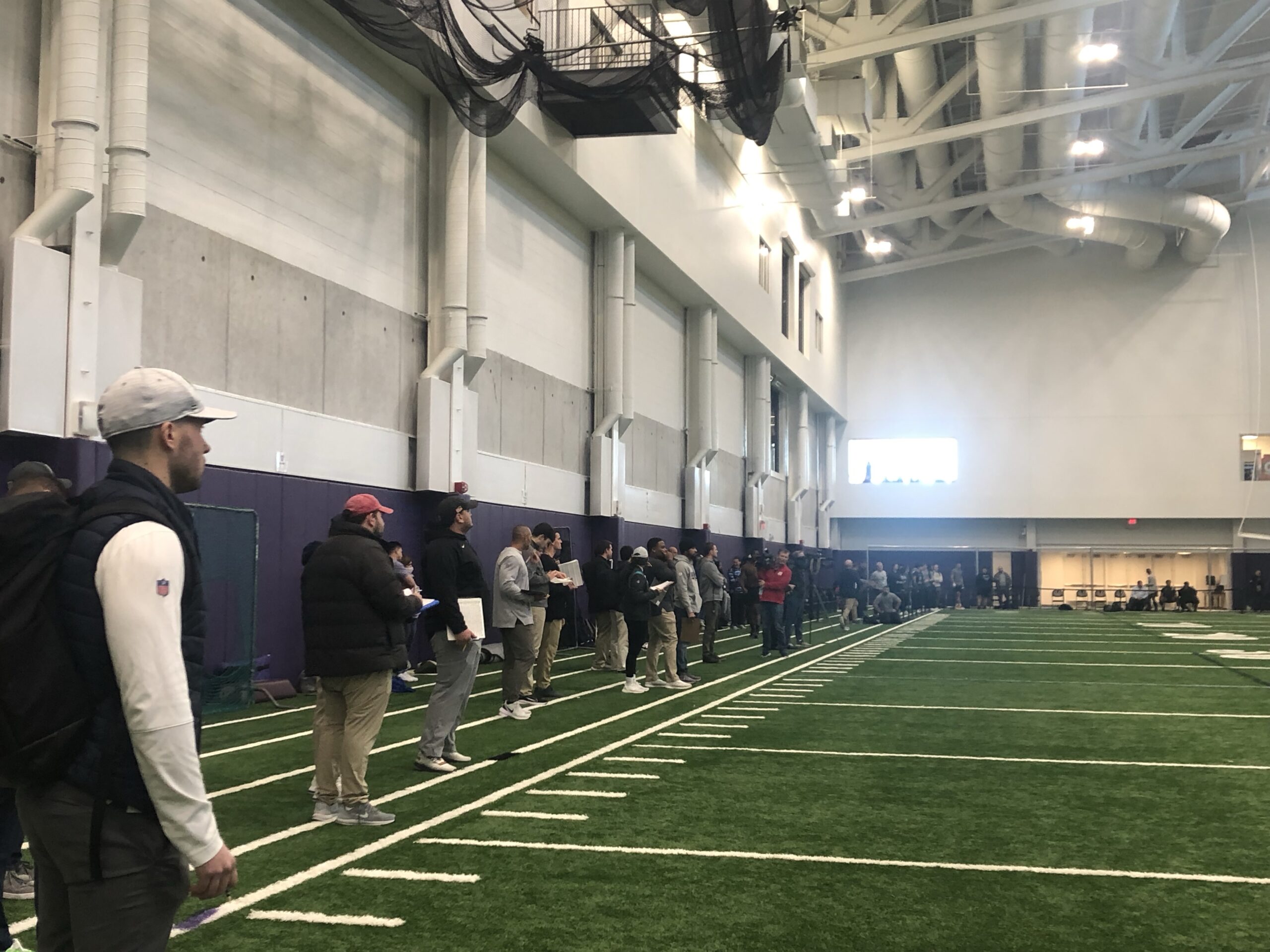 WORCESTER – The talent pool in New England is deeper than ever before. If you need proof, it was on the campus of Holy Cross Tuesday afternoon.

A group of 13 players from Brown, Harvard, Bridgewater State, Assumption, Anna Maria, Framingham State and the host Crusaders went through the vertical jump, bench press, broad jump, three-cone, short shuttle and 40-yard dash, as well as some individual drills at the Holy Cross Pro Day. There were NFL scouts from 26 teams on hand, including the Patriots.

Many of them were there to see Brown QB EJ Perry. Perry’s stock has skyrocketed throughout his last season with the Bears and then during this offseason. Perry didn’t disappoint the media, coaches, scouts or anyone else who watched him, throwing darts all around the St. Ignatius Indoor Practice Facility.

While Perry was the “main event” of sorts, guys like Harvard running back Aaron Shampklin (37” vertical). Framingham State defensive end Josh Onujiogu (10’1 broad jump, 34.5” vertical), and Holy Cross linebacker Benton Whitley (24 bench reps) used Tuesday as one final showcase for NFL scouts to either get on the radar, or prove they deserve to hear their names called in April.

Whitley’s head coach Bob Chesney and the rest fo his staff were on hand lending support, helping with drills, chatting up scouts or just making sure folks knew there was some food in the weight room if anyone was hungry.

With all the success the Holy Cross program has had under Chesney, having the NFL on campus for such a big day is always a prideful moment for the program. This was the fourth year the Crusaders have hosted a Pro Day.

“Minus the Covid, it’s I think our fourth year in a row hosting a Pro Day and this facility certainly provides a great opportunity for guys to come in here and avoid any weather,” Chesney said. “Today of course ended up being a perfect day, but you avoid any weather and the guys get a chance to show their talents.

“I think hosting it, there’s a sense of pride. To have this facility and find a day to open it, we just want to make this as great as it can be for everybody involved. These guys all dreamed about making it to the NFL since they were kids and now here they are getting a chance to show their stuff and highlight what they’ve done their entire life, and to be a place that hosts those types of moments and dreams, certainly there’s a sense of pride to that.”

One of Chesney’s wide receivers Tenio Ayeni had a strong showing on Tuesday, particularly while catching passes during Perry’s throwing session that lasted about a half hour. Now that the day has finally come and gone, there was a sense of relief mixed with more motivation than ever before.

“It’s definitely a get-back-to-work feeling, but also, the relief is there,” he said. “You’ve been working for three, to four, to however many months up for this exact moment, so yeah there’s a little bit of relief, but we’re just excited to get these numbers in there and then you push to get even better ones.

“It’s a good relief, but definitely ready to get back to work and keep pushing.”

Perry spoke with a small huddle of reporter’s following his performance and shared some of the same sentiments Ayeni did.

“No, I want to go do it again,” Perry said when asked if he was relieved it was over. “It’s fun, you get to throw the football, that’s awesome. The only thing that kind of stunk is you don’t have pads and guys trying to hit you. We’ve been out here the last six days doing the exact same thing running it through, except when we’re here alone we can do it three or four times through.

“We all love this. Everyone who plays this game that’s trying to play at the next level loves doing it, so it’s awesome.”

Each guy that spent roughly three or four hours going through the biggest job interview of their life showed the 100-plus people on hand in Worcester Tuesday that the talent coming out of New England – no matter what school or level – can hang with anyone if given the opportunity.