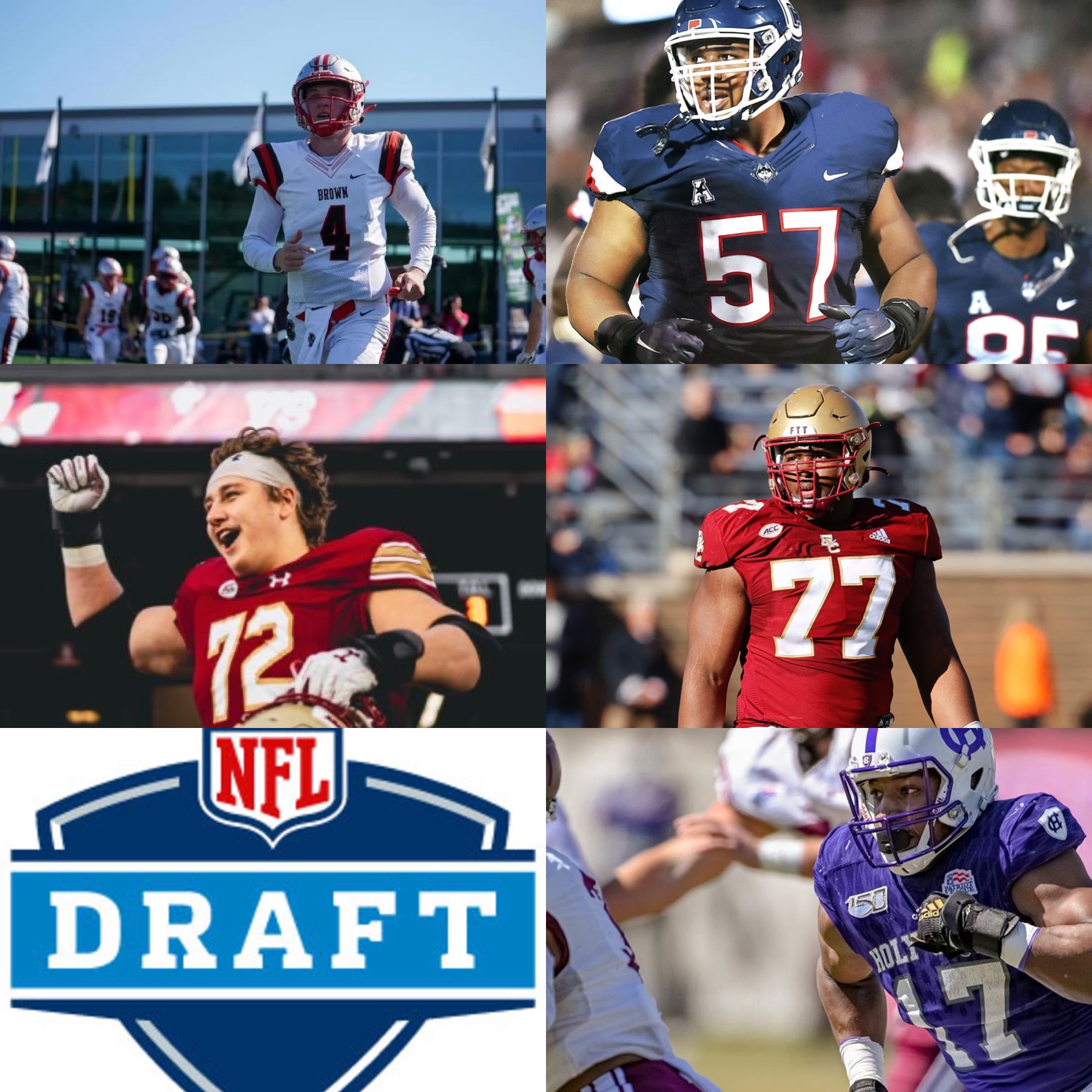 New England football has become a recruiting hotbed for college coaches but it has now also become a draft hotbed for front offices across the NFL as well.

Two of the top fifty players in the NFL Draft (Zion Johnson and Travis Jones) played in New England at Boston College and UConn respectively. There are also other talented players on this list that will make an impact in the NFL.

So, without further ado, here are our top 35 New England draft prospects. There is a lot of talent on this list.

Editor’s Note: Our list is subject to change and can be updated prior to the draft.

1. Zion Johnson, C/G, 6-3 312, Boston College: Johnson is the best interior offensive lineman in this draft and could play guard or center. Johnson will get drafted in the first round. He could go in the first twenty picks.

2. Travis Jones, DT, 6-4 325, UConn: Jones has been dominant in the pre-draft process. He has prototypical size, he is strong and explosive on the snap. Jones has first round talent and could sneak into the bottom of the first round.

3. Alec Lindstrom, C, 6-3 296, Boston College: Lindstrom is smart, tough and can anchor an offensive line for a long time. He has the size and athleticism to play in any system, especially one where he move laterally and can come off of double teams to the second level. Lindstrom is a day two pick.

4. Isaiah Graham Mobley, LB, 6-1 230, Boston College: Graham Mobley is athletic and can play all three downs. In many ways, IGM’s best football is ahead of him because of his talent and versatility.

5. Brandon Sebastian, CB, 6-0 178, Boston College: Sebastian started three years at B.C. He has experience, length and can play press or off coverage. Sebastian profiles as a potential starter at the next level. Sebastian finished with a career high 4 interceptions last season.

6. E.J Perry, QB, 6-2 211, Brown: Perry is a terrific athlete who made a great impression at the Combine. He was one of the best players at the FCS level the past two years. Perry is a gamer. He makes plays with his mind and his legs when things break down. Perry is quarterback. Talk of him playing receiver is premature.

7. Ben Petrula, OT, 6-5 325, Boston College: Petrula was a valuable member of the Eagles offensive line the past four years. He started at center as a freshmen for the injured Jon Baker. Throughout his career at the Heights, Petrula has either come off the bench or started. He is a fundamentally sound run blocker and his position versatility at guard or tackle will make him a popular day three target for teams.

8. Tyler Vrabel, OT, 6-5 310, Boston College: Vrabel is a solid pass blocker who has the footwork to match up against today’s edge rushers. He is also technically sound as a run blocker as well. Profiles as a swing tackle who could play either side but can also kick inside to guard. Guard may end up being his best position long term because of his ability to move well laterally.

9. Trae Barry, TE, 6-6, 244, Boston College: Barry put up big numbers during his time at Jacksonville State and proved he can play at higher level at Boston College this past fall. Barry is at his best as a move Y who can be displaced and generate match-ups, especially in the red zone. Needs to show more as blocker but there is plenty of upside there.

10. Ryan Van Demark, OT, 6-6 302, UConn: Van Demark was a four year starter at UConn. He played left and right tackle but profiles more as a right tackle in the NFL. Van Demark is physical in the run game and he is a good pass blocker who uses his length to his advantage. Van Demark would be a solid day three value and has the makings of a future starter on Sundays.

12. Bryce Watts, CB, 5-11 185, UMass: Watts actually committed to Virginia Tech in 2017. He has good size and can play outside or inside in sub packages. Watts is a smooth athlete who transitions in and out of cuts well and can close vertically. Watts best football is still ahead of him.

13. Julius Chestnut, RB, 5-11 225, Sacred Heart: Chestnut had a tremendous career at Sacred Heart, becoming of the top FCS running backs in the country. Chestnut runs hard and he has good feet for a back his size. He has a second gear once he hits the second level. Chestnut is also a very good pass blocker and a much better receiver than most think.

14. Joey Kenny, FB, 6-2 252, Rhode Island: Kenny is your classic fullback/U tight end combo player. He is an excellent blocker who moves well and plays with a good pad level. He can also be a factor in the passing game both in the flat and on intermediate routes. He would be a great fit in the Shanahan style offenses we are seeing today in the NFL.

15. Travis Levy, RB, 5-10 203, Boston College: Levy will carve a niche returning kicks and as a back up running back who plays in 10 or 11 personnel packages on third down. He is shifty in space and can make big plays in the screen game if given room to operate.

16. Omar Fortt, S, 6-1 1/2 218, UConn: Fortt is a Connecticut native and former weakside linebacker who is going to make the switch to safety. Fortt has good size and in this era of 3X3 players, he is someone who can play in the league because of his versatility and athleticism.

17. Clay Legault, OT, 6-5 325 Merrimack: Legault was a four year starter for the Warriors. He could play guard or tackle. He has a nasty disposition and he plays the game fundamentally sound. The Manchester, New Hampshire native could certainly get drafted and he has starter potential at the next level.

18. Westin Elliott, QB, 6-5 235, Merrimack: Elliott is quickly becoming a household name in draft circles. He has terrific size, adjusts well in the pocket and has a compact delivery. The Cowboy as he’s known transferred to Merrimack from Louisiana Tech. Elliott is a developmental prospect with upside. A front office that is looking for a young quarterback to develop should take a chance on him day three.

19. Coby Tippett, S, 5-11 195 Rhode Island: The son of Patriots great AndreTippett has had a great high school and college career. Plays with great instincts and has a nose for the ball in coverage. Tippett can play in the slot in sub packages as a corner or play over the top on early downs as a safety.

20. Andre Miller, WR, 6-2 220, Maine: Miller is a big receiver who runs good routes and has strong hands. He played for current UConn offensive coordinator Nick Charlton and put up big numbers. Miller isn’t a burner but he plays faster than his forty time. He is certainly worthy of drafting and he can make a roster as a depth receiver with future upside.

21. Shawn Page, OG, 6-3 310, Merrimack: Page played in 30 games in Bloomsburg before transferring to Merrimack. Page profiles as your classic phone booth guard. He plays with good technique and strength at the point of attack as a run blocker and he is a good short area pass blocker. Page could certainly get drafted in day three but he will most certainly end up in a camp.

22. Avien Peah, DE, 6-2 280, UMass: Peah has motor and he offers scheme versatility in that he can play defensive end on early downs and kick inside to defensive tackle in sub packages. The former LaSalle Ram is quick off the ball and plays with good power and leverage.

23. Ray Miller, OLB, 6-1 230, Maine: Miller is a rangy weakside linebacker who plays with great instincts and does a good job of getting to the ball. Prior to Maine, Miller played at Campbell University where he appeared in 34 games. He racked up 179 tackles, 14.5 tackles for loss, 5.0 sacks, two fumble recoveries, seven pass deflections, and an interception.

24. J.J Coliman, OT, 6-4 295, CCSU: The Everett native can play either right tackle or kick inside to guard. He is physical at the point of attack and gets movement. Will need to prove he can handle edge rushers at the next level but there is plenty of upside.

25. L.B Mack, 6-2 230, LB, Rhode Island: Mack plays with good instincts and is a tough, physical linebacker who can play on the weakside or in the middle in sub packages. Mack is instinctual and does a good job of locating the ball and playing down hill. Mack plays the game the right way and can make a team as a special teamer.

26. Tre Jones, OLB, 6-3 255, CCSU: Jones offers scheme versatility in that he can play defensive end in a 40 front or outside linebacker in a 30 front. The Providence native certainly proved he can rush the passer finishing with eight sacks this past season.

27. Jay Rose, TE, 6-3 3/4 253, UConn: The former quarterback has flashed upside as a tight end. Rose is athletic, runs good routes and competes as a blocker. He is an unfinished product in many ways but he could play at the next level as a U or move tight end.

28. Ivory Frimpong, WR, 6-3 195, Rhode Island: Frimpong is long and smooth as a route runner. He competes in one on one situations and has strong hands. He uses his frame well, especially on three step routes. Frimpong is a solid blocker who competes every time he blocks someone. He is an intriguing prospect.

29. Evan Horn, SS, 6-0 215, UNH: Horn won’t blow you away with his athleticism but he plays faster than he tests and he plays with great instincts. He can play in the box or over the top in a two high look. Tough and physical, Horn can make a living playing on special teams at the next level.

30. Daniel Adeboboye, RB, 5-11 220, Bryant: Adeboboye is compactly built. He runs with good balance and power and has a second gear once he hits the second level. He also has good hands and catches the ball with ease out of the backfield. Adeboboye could be a sleeper in this group as a late round draft pick or PFA. Eligible for the CFL Draft as well.

31. Mike Andrejco, OT, 6-4 288, Bryant: Andrejco played tackle at Bryant but projects more as a guard at the next level.

32. Niko Mermigas, S, 6-0 205, Dartmouth: Mermigas can play over the top as a high safety or screw down and cover a slot receiver. He offers scheme versatility due to his athleticism and length. Mermigas can play on all the special teams as well.

33. Chad Broome-Webster, OG, 6-4 275, Brown: Broome-Webster has been one of the most consistent offensive lineman in the Ivy League the last few years. He is undersized but technically sound and plays the game with a high I.Q.

34. Tyshaun James, WR, 6-3 205, CCSU: James is a solid route runner who is smooth in and out of cuts. He gets off the ball quickly and has shown an ability to consistently stack defensive backs. The skill set is there. James needs to prove his skills can translate against tougher competition.

35. Andre Blackett, ILB, 6-0 235, Rhode Island: Blackett plays with good instincts and he is physical. Built like a MIKE or SAM linebacker.