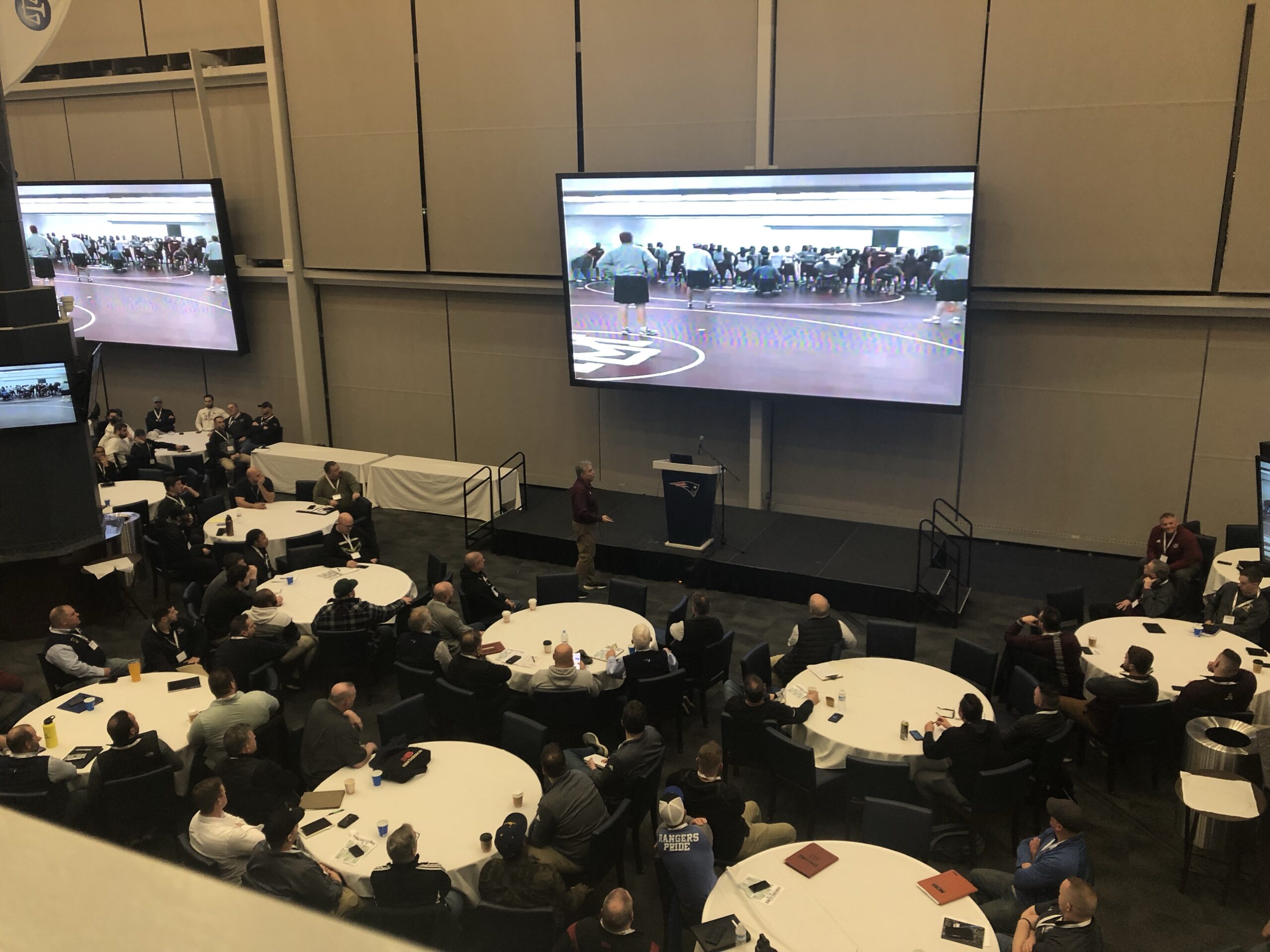 FOXBOROUGH – The game of football will be better off in 2022 and beyond because of the coaches that spent hours upon hours at Gillette Stadium this weekend.

The Patriots hosted the annual MHSFCA Coaches Clinic Friday and Saturday, with 38 presentations from college and high school coaches and a phenomenal keynote speech from UMass head coach Don Brown on Friday night.

Beyond the 38 presentations, everywhere you turned there were mini huddles of coaches exchanging ideas, laughs and stories. Writing on napkins, watching slides on laptops, or just having a couple beers talking scheme.

It was truly a small slice of football heaven for those that love the game.

After the scheduled presentations were done on Friday, many coaches decided to continue the evening at one of the local establishments at Patriots Place, where stories and ideas surely continued to fly into the middle of the night.

Things picked right back up on Friday morning at 7:30 in the Putnam Club as fog rolled over the stadium, making it barely visible. Day two kicked off a continental breakfast and coaches speaking about a number of different things, it was a coaching buffet of sorts.

Topics ranged from offensive ideas with UMass offensive coordinator Steve Casula, to Wing-T and O-line drills by Alex Rotsko (head coach at Marshwood High School in Maine), all the way to “defending the run with 3-4 front” with Amherst College D-line coach Ed Augustin. Whatever you wanted to learn about or get better at from a coaching perspective, you could over the two day event.

Need helmets or jerseys from Riddell? Need awards from Championship Award-Guys? Want to take film clips to the next level with QwikCut or dominate fundraising with Gold Athletics? There were about a dozen vending booths lined up just in front of the windows inside the club, adding to the “one-stop shop” nature of the clinic.

Prior to the final two-ish hours of presentations on Saturday afternoon, there as chicken parm, pasta and meatballs to be had while a few awards were given out to local youth and high school coaches. Bellingham’s Gavin Elder was awarded a Gold Athletics scholarship and each state championship coach was recognized as well.

Gary Doherty, Fred Kirsch (New England Patriots Chief Digital Officer) and Dave Driscoll are the guys who pretty much run the show and they’ve been doing so for quite a long time.

The Patriots and the Kraft family have truly shown an appreciation for the high school game, opening their doors for the Super Bowls and hanging jerseys in The Hall at Patriots Place. The devotion and partnership on display this weekend continued to show just how much they support the coaches and the growth of the game in this region.

“The Kraft family wants to be part of New England football,” Kirsch said Saturday morning. “This is all part of what they do to support football in New England. You’ve got this, you’ve got the MIAA Super Bowls that we do, we run a combine for high school kids in May in the field house, it’s all part of that same effort.”

Two of the more consistent programs in the area the last few years have been Miflord and Franklin. Both Dale Olson and Eian Bain were on hand for both days along with other members of their staffs, just trying to get better.

“We try to take bits and pieces,” Olson said when asked what he and his brother Dana and other coaches try to get out of all of the information available this weekend.

“We’re high school coaches, so a lot of the stuff we’ll see from the colleges you can’t implement everything because they have dudes who are 6’5 and can run like the wind to fit their system, but we get what we get. If you can take a little bit from each session you sit in, you can implement different things. Whether it’s a drill, an RPO, whatever it is, you can get better and you don’t need to take everything in all at once. There’s a balance there.”

Coaches are teachers by definition, which is why all of the options available over the two days are so valuable.

“The good thing about football is there’s a lot of different ideas,” added Bain. “Any two programs, whether they’re elite or middle of the road, no one does anything the same. Whether it’s language, scheme or otherwise, so it’s always great to see not just what people are doing, but how they’re teaching it. Understanding the why behind this stuff is really important.”

Perhaps more so than anything else, there was an unbelievable sense of camaraderie in each room during both days. It wasn’t just a macho football ego thing either. It was hard to explain, until Bain put it perfectly.

“I think there’s a lot of people – in high school anyways – that have a chip on their shoulder about what the rest of the country thinks of football in New England,” he said. “Just speaking for myself, I know when I come to these things, we just want to maximize the potential of our program.

“I think to a certain extent, everyone here wants to show that football is as important here as it is anywhere else in America.”

With the passion and commitment on display from hundreds of high school and college coaches as well as the Patriots, it’s safe to say the other 44 states will be learning that soon enough if they haven’t already.