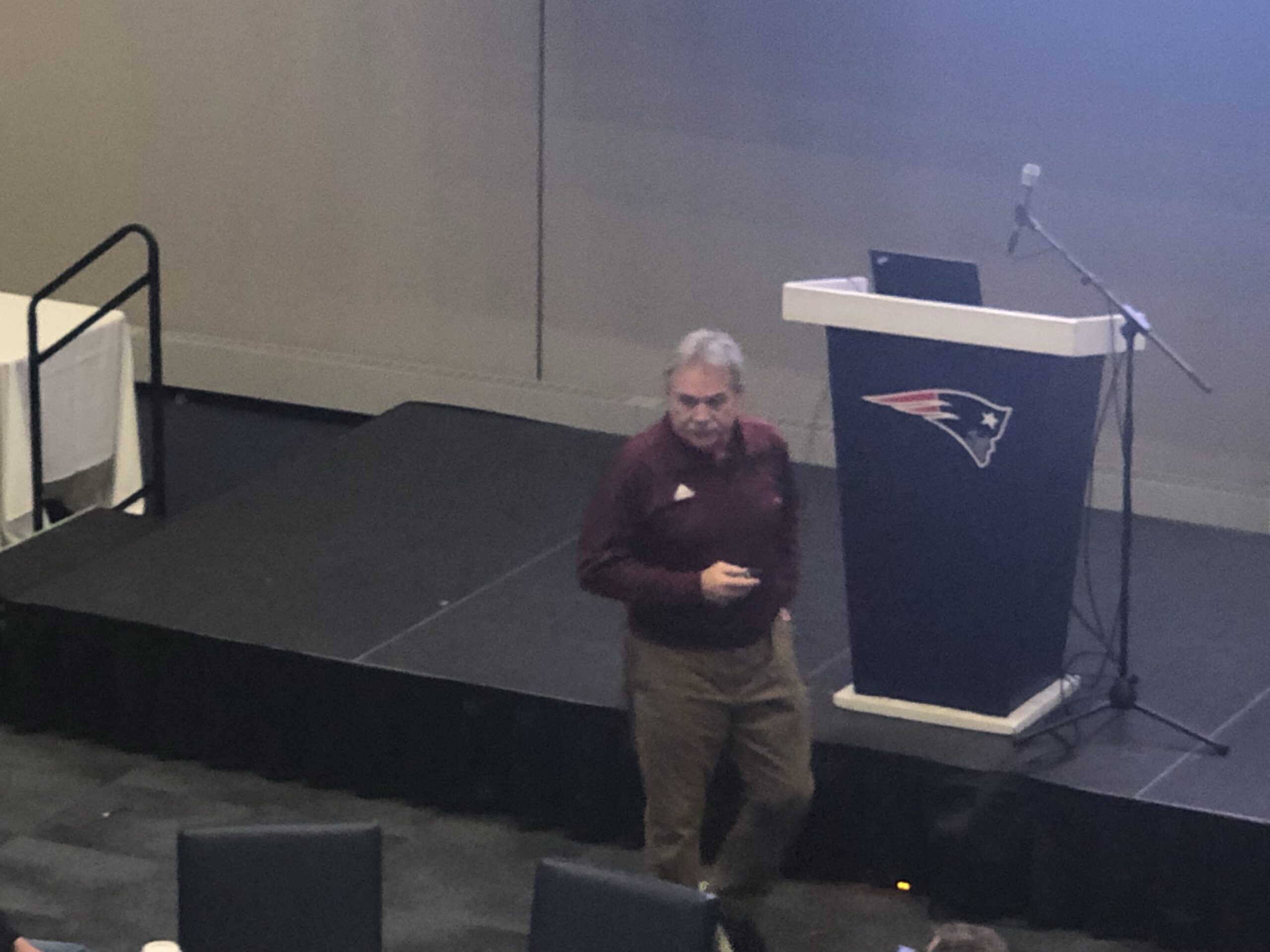 FOXBOROUGH – Around 8:35 on Friday night, UMass head coach Don Brown had a small group of four coaches huddled around him at the far end of Gillette Stadium’s Putnam Club.

Brown slightly bent his knees for a second or two, placed his hands in front of him as if he was about to engage with an opponent, gave some instruction, nodded slightly and then continued to shake every hand that was extended to him.

This little interaction was minutes after Brown’s second hour-long presentation at the Massachusetts High School Football Coaches Association Coaches Clinic. Brown was the keynote speaker, giving an energetic view of how he coaches defense and how he plans on bringing UMass back to prominence. Brown showed a bunch of motivational quotes and a letter written by Kwity Paye – now of the Indianapolis Colts – with Paye preaching leadership on and off the field. Then, there was grainy film of a few old school drills Brown uses at every stop during his career. Brown suggested that the hundreds of coaches on hand build team camaraderie using some of the same drills.

There was also plenty of Michigan film from some familiar faces, Chase Winovich and Josh Uche. After that, he took a quick 10-minute break and then gave another presentation on defense, teaching coaches the importance of converging to the football as a unit and various tackling techniques. Expletives, jokes and a few neat stories were all mixed in.

At 66-years old, Brown could have been anywhere on a Friday night in March, but he still can’t get enough football.

“It’s all I know,” he said when asked where his passion still comes from. “You go about your business and you go about it a certain way, I guess if that were to change I’d have to go find something else to do, but I’m not doing that.”

Times have changed since Brown’s first excursion with the program, but in his mind things are just the same aside from a few new additions on campus, which means his expectations haven’t changed either.

“I really can’t say that there is anything,” Brown said on what’s different this time around for him. “New building. The facilities are much better. The reception we’ve received for the new football performance center, kids are like ‘coach I didn’t know there was anything like this out here,’ the reception in recruiting has been great.

“Obviously, FBS now as opposed to FCS, but it’s like I told the kids, my experience at UMass, all I know is winning (43-19), so I don’t expect it to change, we’re going to keep rolling and do our deal.”

Brown has thoroughly enjoyed being back in Amherst, even rekindling his love for on old breakfast spot.

“It’s been good,” he said. “I feel like wherever I’ve been I’ve given my best effort, but it doesn’t take long (to get re-adjusted), all of a sudden you’re eating a breakfast at Stables or working out at the building again.”

Fans and media may scoff at a coach “changing the culture” for a program that was legitimately a laughing stock across the country before the UConn game last year, but it’s clear as day that things are different already. With a new staff of guys fully committed to the program and an influx of talent, Brown has done his best to completely eliminate the negativity in an extremely short time frame.

“I don’t talk about the past,” he said. “We just don’t. We talk about today, tomorrow, what we’re doing, how we’re doing it. You live in the past you die in the present, so not one second (has been devoted to the past) we just worry about what’s in front of us.

“I think the kids have done a tremendous job of staying on task and learning. The nice thing, the way it’s set up now, there’s a chance for these guys to learn what you’re doing conceptually, so when you hit spring practice it won’t be a complete mess.”

While optimism is at an all-time high for the program, the lack of a conference is still a major factor for the Minutemen moving forward, particularly in recruiting. There’s a belief it’ll happen eventually, but for now Brown isn’t concerning himself with it.

“I think the biggest thing in talking to Ryan (Bamford), I think that’s always open for discussion,” Brown said. “I’m confident it’ll happen at some point. He’s very receptive to it, it’s just a matter of the right opening at the right time and then let’s go.”

The staff commitment can’t be overlooked and the independent factor is a big reason why. The Minutemen now have a ton of guys in the building who care deeply about the program and can convince recruits that it won’t be a factor. This staff wasn’t put together by accident, and Brown knows when things turn around it’ll be that much sweeter because of it.

“When you go to school at a particular place like UMass…I got a chance to coach a bunch of them or work with them, so it makes it a little more special when we get this thing right,” he acknowledged. “I couldn’t be happier. That wasn’t by accident either. I didn’t just wake up and decide to go after whoever, it was serious, we wanted to do this.”

Brown closed his keynote speech by telling every coach on hand they were all welcome to come to any of the spring practices, and then he simply said he “had a blast” as they applauded his efforts.

It may seem hard to believe after all his years in the game, but he sure as hell meant it.