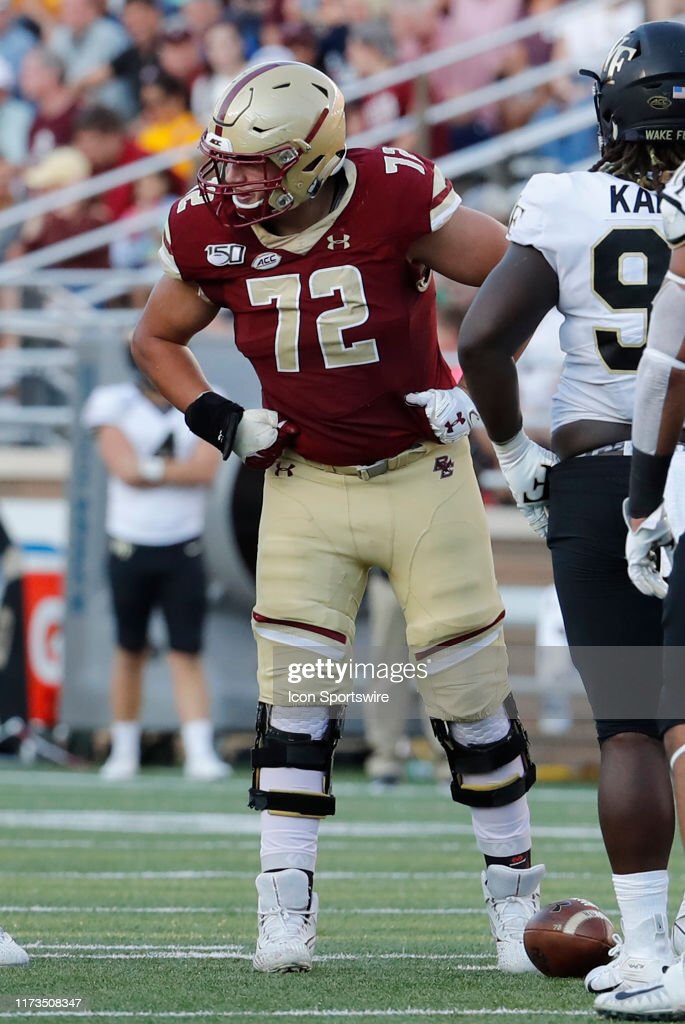 Four days before Christmas this past December, Alec Lindstrom had to deal with something no kid should have to deal with as their final days of being a college student wind down.

Lindstrom’s mother passed away at home in Dudley, MA on December 21 after a lengthy and courageous battle with ovarian cancer. She was surrounded by those that loved her most. Dawn Lindstrom was 56.

At that point, the BC football team was preparing to head to Washington D.C. for the Military Bowl, scheduled for December 27th, but the game never happened due to Covid protocols. Suddenly, Lindstrom’s college career was officially over and he was now facing the rest of his journey towards a potential NFL career without one of his biggest supporters behind him.

Luckily, Alec’s family and the BC family rallied around him with the “Lindstrom Strong” mindset his mother fought with until the very end. Now, after a phenomenal week at the NFL Combine, Lindstrom is one step closer towards joining his brother Chris in the NFL.

“I do it for her. I know she was smiling down and proud of me, proud of all of us and so happy, I knew she was with me yesterday,” Lindstrom said in a phone interview with NEFJ on Sunday night following his fantastic performance alongside teammate Zion Johnson on Saturday.

Head coach Jeff Hafley has preached For The Team since arriving at Boston College, but he usually isn’t just talking about the on-field stuff. It’s all the stuff outside of football that truly bonds teammates and the BC family has been a huge help to Lindstrom as he navigates his way through the grieving process and the NFL Draft process.

“The supporting cast I have is one I’m truly blessed with,” Lindstrom said. “Having my family texting me, cheering me on. My girlfriend texted me all my stuff cheering me on, texting me, calling me every day, all of them , it’s unbelievable the support I have.

“You’ve got to just keep pushing. The BC family is incredible. Getting texts from the coaches, just how much they care about us. When we’re done after four or five years, they could be done with us and never talk to us again, they don’t owe us anything. But, they care so much about us still and the support system I have with my family, through relationships with BC…I’m just so blessed to have everybody.”

As for the experience itself in Indianapolis, after waiting what felt like forever for the life-altering job interview, it came and went in a flash.

“Looking back before it, you’re like alright I’ve got to work out for the combine and it’s taking forever to get here,” he said. “You’re like, when is is going to get here? Then, you get there, and it kind of slaps you right in the face. First thing, you’ve got this test, then you’ve got to get blood taken out, then there’s this, this and this, bang, bang, bang.

“Then, the next day, there’s all the medical stuff. It’s kind of overwhelming.”

You would think that dealing with us leaches in the media twice-a-week would have Lindstrom ready for the pressure the media portion of the combine brought, but even that was still pretty unervving.

“I went up to the podium and I’ve got three cameras on me and 10 people fighting to ask me a question and there’s so many people. It’s like holy crap this is real and it hits you and you’re like ‘dude this is pretty cool,” said Lindstrom. “Me and Zion went back and we were talking and we were both like, this is so cool. It’s so surreal.”

Surely, playing in prime time in environments like Death Valley would make the pressure of the on-field drills less severe at least, right?

“You go out there and you’re doing the stuff and it’s nerve-racking, you’re on national TV,” Lindstrom added with a bit of a laugh. “You’ve got to go out and put up good numbers because 1. It’s a job interview for the NFL and 2. you’re on national TV, you want to show those wheels, you know what I mean?”

Needless to say, Lindstrom is quite happy it’s finally over.

“It’s such a relief because it’s over and the stress is off, but there’s also a sense of “holy (expletive) I just did this. That was an awesome feeling,” he said.

The interviews aren’t done yet, but getting through the big one will almost certainly make BC’s Pro Day March 25 a more enjoyable experience. Lindstrom won’t be doing nearly as much as he did this week.

“I don’t plan on doing any of the drills, I was very happy with my performance,” Lindstrom said regarding his thought process heading into Pro Day. “I’m really excited to get more hands-on work with the coaches though. I will be doing the position drills and all that stuff.”

Lindstrom will continue training at Edge Performance Systems in Foxborough alongside guys like his brother Chris and Patriots center David Andrews, among others.

“I’m looking forward to working with some of the professional guys and my trainer (Bailey Tanngey) is the man. I’ve been texting him, kind of getting away from the track training like the 40 training and getting more into strength training and back into the real football drills.”

In true For The Team fashion, Lindstrom is looking forward to watching some teammates who were not at the NFL Combine show the NFL scouts what they can do more than anything else at Pro Day.

“I’m super excited to get back up to Boston and see the guys, I’ll be around BC,” he said. “I’m more excited to watch my guys Tyler (Vrabel) and Ben (Petrula) get after it and run. They’re good players too and this is huge for them. This is their combine. I’m training with Ben and I know he’s ready to go and he’s moving, he’s athletic and I’m just excited to cheer them on.”

Just two months ago, Lindstrom lost one of his biggest fans before arguably the most important weeks of his life. With the backing of his family and the Boston College football community, he’s now on the cusp of playing in the NFL, where he will undoubtedly continue to bring the same strength and determination his mother had, the same strength and determination that’s helped him get through it all.