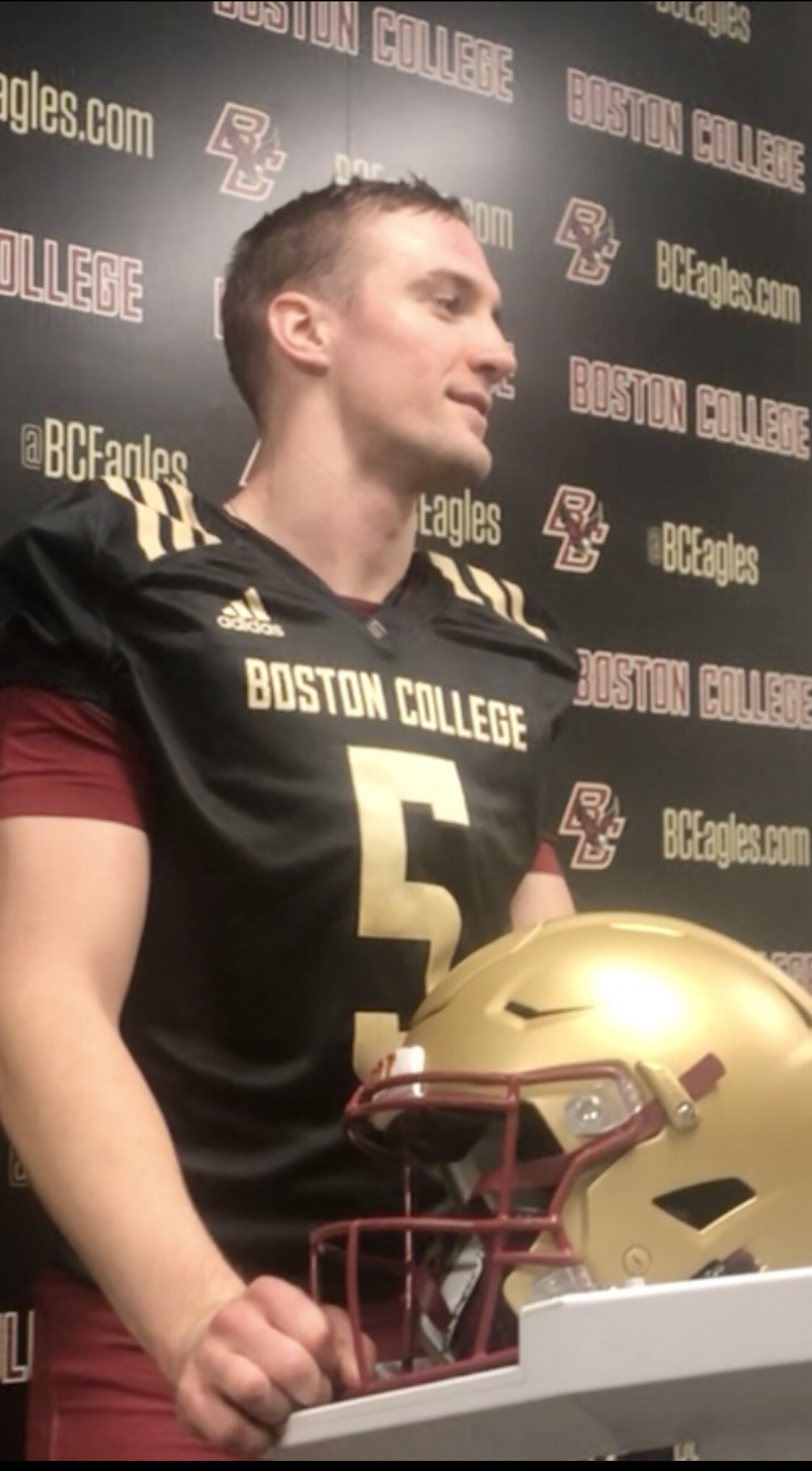 It’s been a long time since a Boston College quarterback had this much hype around him in March.

Phil Jurkovec is now entering his third season as the Eagles’ quarterback and it’s an enormous year for him and the team. Not only does Jurkovec have a chance to build a case for himself to be drafted high in the 2023 NFL Draft, but BC has legitimate ACC championship game hopes resting on his arm.

On Tuesday morning following the second spring ball practice session, Jurkovec talked about playing this year with the potential for draft talk to swirl around him if he has the type of season folks around the college game and the NFL believe he’s capable of having.

“Yeah, I’ve thought about it,” he said. “Hopefully, as much buzz as possible I can get, but just focusing right now on getting better.”

Jurkovec is looking at this year as a bit of a redemption year. After getting hurt against UMass early last season, the comeback at the end of the year was a neat story, but ultimately didn’t go nearly how he or the team had hoped it would.

“Last year was a lost season,” Jurkovec said. “That’s the way I look at it. I know I came back for the last few games, but I wasn’t really 100%, so just looking forward to this year, getting back and finding some success again.”

Jurkovec looks lighter, quicker and his arm strength has seemed as good as ever during the portion of practice the media has gotten to watch the first two sessions. Jurkovec’s grip strength was a problem late in the year last season and he was beat up a bit, but he seems to be all systems go now.

“It was hard, because I came back and I had dropped weight from my injury just not being able to really work out or do any upper body stuff,” said Jurkovec. “I came back and kind of took some hits in those last few games, so my body was recuperating for a while, but now I’m feeling like it’s starting to get back.”

Jurkovec was also asked about his decision to come back for another season and whether it was a tough choice or not since the NFL was still an option despite the injury.

“I knew I would have had a chance to go (in the draft) this year, but I wanted to come back, get another year under my belt and just get the experience getting better.”

As for working with another new offensive coordinator in John McNulty, Jurkovec has enjoyed learning the new scheme.

“It’s been good, it is a new offense, there’s some changes, but so far it’s good, the guys are excited,” he said. “It’s a little different style. So far there’s been nothing wrong, it’s all been good.”

Both Jurkovec and Zay Flowers have a chance to make quite a statement to the country and NFL scouts this season. On Saturday following the first practice, Flowers acknowledged he believes he and Jurkovec could be the best QB-WR duo in the country. Does Phil feel the same way?

“Yeah, we’ve got to prove it to ourselves though,” Jurkovec said with a grin. “That’s really what I care about, just…I know that we can have a really good connection. I don’t know if we’ve had our connection where we want it to be yet in the past two years.

We’ve got a long way to go, but there’s a legitimate opportunity for 2022 to be the year Phil Jurkovec becomes the best quarterback in Boston College history and he seems ready for the challenge.