Teams around the league, specifically the New Orleans Saints and Green Bay Packers have been busy the past week moving money around in an effort to create cap space.

When you look at the numbers, that is not a lot of wiggle room. Miguel put together a chart last week which outlines ways the Patriots could create cap space with the current players on the roster. The chart is detailed, but when you look at it, it makes a lot of sense. 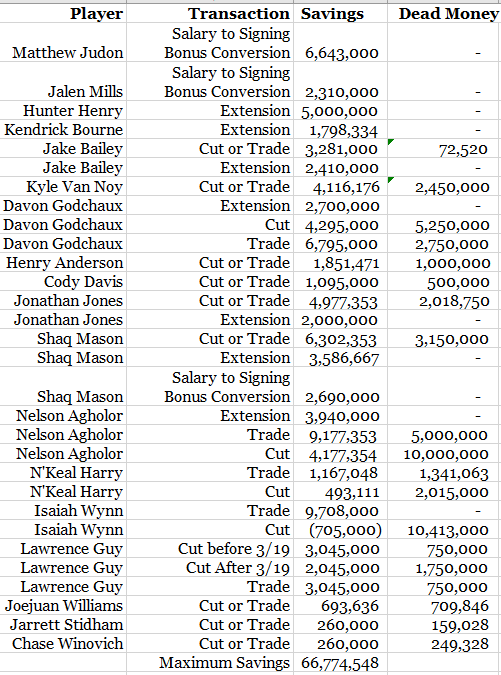 It is important to note, that simply cutting a player is not an option. Cutting a players results in dead money which counts against your cap.

As I have said on numerous occasions, it was great that Bill Belichick spent all that money last off-season, but the players he signed better pan out because the Patriots are going to be stuck with them for a couple of years.

Belichick will obviously not be as active this off-season. Creating cap space is more about moving money around to either tag or re-sign J.C Jackson or to feee up money to re-sign Devin McCourty, Trent Brown, Ted Karras and other priority free agents. Any upgrades to the roster will come through the draft.

So working off of Miguel’s chart, here are five ways the Patriots can create extra cap space without having to drastically alter the roster.

1. Convert Judon’s salary to a signing bonus: Salary conversions are popular with teams that need to create cap space. By converting Judon’s 2022 salary to a signing bonus, the Patriots can save $6.643,000. As it stands, Judon is scheduled to earn $16.5 million in 2022. Remember, there is a kick the can down the road element to this. Doing this creates cap space for this season but restructures spread money out and back load contracts. You save some money now but pay for it later.

2. Extend Agholor: Let’s be honest, the Agholor contract is a bad contract. Belichick overpaid for Agholor coming off of a career year and now there is some buyers remorse. The Patriots could try to trade the wide receiver but the odds of that happening are slim to none. Bad contracts don’t get moved in the NFL. No team wants to pay $15 million for Agholor. The Patriots best bet at this point is to extend Agholor. If they do that, they can save $3.9 million in cap space this season. That’s a big chunk of money for a team that desperately needs to find money. Extending and spreading out Agholor’s money makes the most sense.

3. Extend Henry: The Patriots can take the same approach with Hunter Henry. By extending Henry, they can save $5,000,000 dollars this season. Unlike Agholor who isn’t exactly a lock to extend, extending Henry would make a lot of sense. He lived up to expectations last season and he was a security blanket for Mac Jones, especially in the red zone.

Belichick has some tough decisions to make along the defensive line. Do you go younger and save some money that way or do you reconfigure things with this current group and try to make the money work?

The Patriots could save $2.7 million if they were to extend Godchaux. I don’t think Belichick wants to go that route but the alternative isn’t any better. If they cut Godchaux, they are looking at saving $4.925 million but they would have $5.2 million in dead cap space. That is a lot of unused money on the books.

Cutting Guy before March 19th would save the Patriots just over $3 million and the dead cap hit would be $750,000. The problem is, Guy is a leader on the team and a popular player. Cutting him is a tough decision.

Anderson is more than likely the odd man out. The Patriots could save $1.85 million if they cut him but he would still count $1 million dollars towards the cap.

5. Trade Wynn or Mason: The Patriots could free up a lot of money if they moved either Isaiah Wynn or Shaq Mason.

Mason is still playing at a high level so he would be tough to part with. Wynn on the other hand struggled last season and a fresh start could do him some good. If the Patriots were to move Wynn, they would save $9.7 million. Cutting him isn’t an option because it would be a $10 million dollar cap hit.

Don’t be surprised if the Patriots extended Mason. It makes the most sense.

Belichick has his work cut out for him but if he is willing to move some money around and extend a couple of deals, he can create the requisite cap space to tag Jackson and spend a little in free agency. How he deals with these cap issues will be interesting.