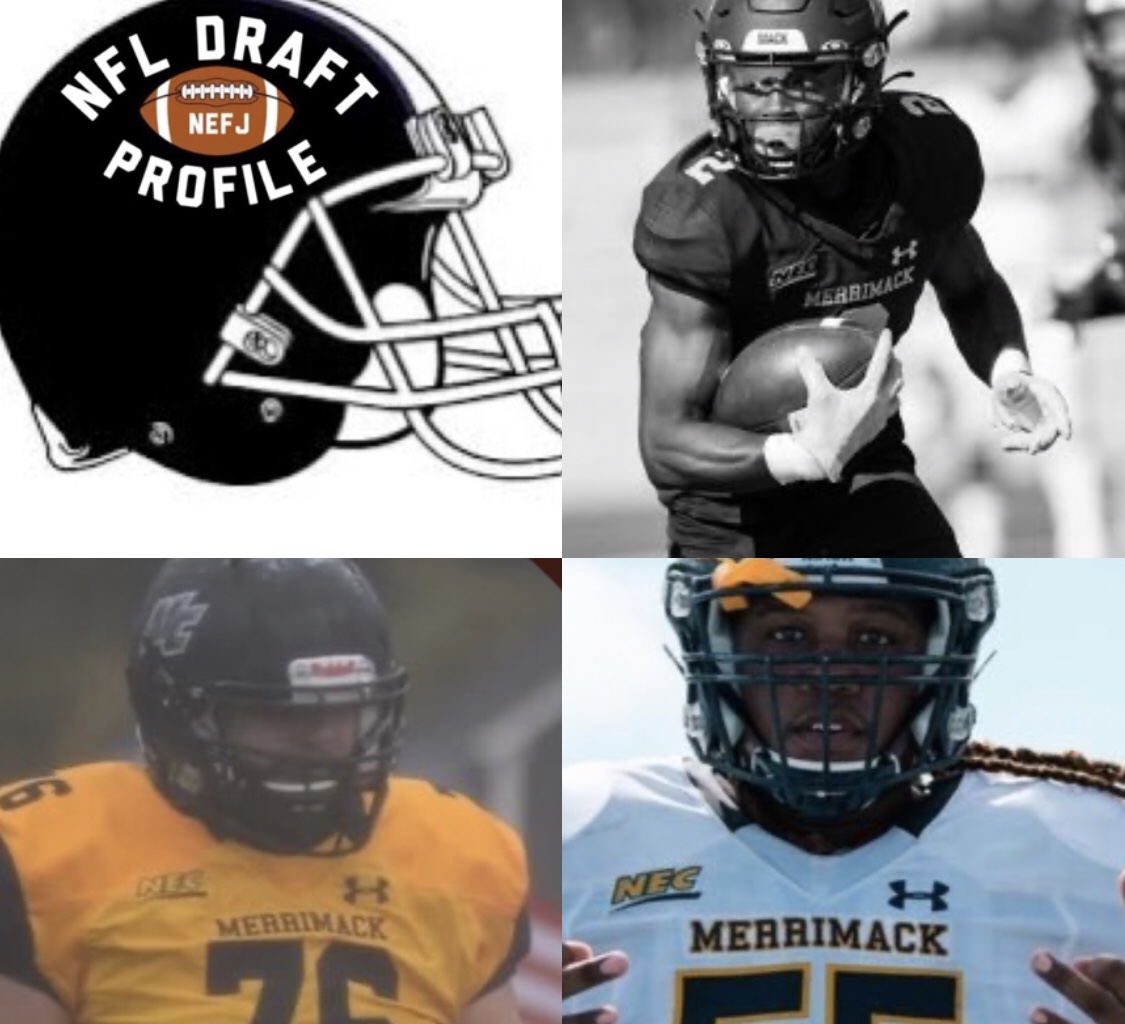 Merrimack QB Westin Elliott made quite a name for himself this year, but there is another trio of Warriors that could hear their names called on draft weekend as well.

Head coach Dan Curran – entering his ninth year at the helm of the program – has put North Andover on the map at the Division 1 FCS level and the NFL-caliber talent coming through the program is a big reason why.

Offensive linemen Clay Legault (6’4 325) and Shawn Page (6’3, 315) along with defensive back and kick returner Caleb Holden (5’9 185) have all garnered interest from NFL scouts. As Pro Day approaches later this month, all three are hoping to join Elliott on an NFL roster by any means necessary.

Legault was a four-year starter, a two-time captain and All Conference, All New England selection.

“He Improved dramatically every year and became one of the best run blockers in New England,” Curran said of Legault. “Clay played OT for us, but projects at OG at the next level and can also short snap. He was having a tremendous senior season before breaking a bone in his foot Week 9 and missed the rest of the season and the postseason and all star games due to surgery and rehab.”

Legault knows he’s come a long way since his days in New Hampshire.

“Coming out of New Hampshire, I had little experience with quality technique, but Coach Curran saw me and took a chance at developing me into an absolute animal and that is exactly what happened,” Legault told NEFJ recently. “Coming from a lesser known state for football, I knew I had to give extra effort with anything and everything I do. Progressing into my last couple seasons at Merrimack it’s been an accomplishment that I’ve worked hard enough to be recognized by a bunch of NFL scouts.

“A lot of long days, blood, sweat, and tears made every second of the process worth it. Coach Curran has drilled into my head to “Trust the process” and I trust it with everything I got.”

The big man has also been lucky enough to work with a member of the Houston Texans as part of his preparation.

“Thankfully, I’ve been blessed to have one of my great friends on the Texans, Samuel Cooper, be able to provide a lot of feedback, give advice, and be able to work with to better my game and prepare for the next level,” he said. “The conversations I have with Coop are pure motivation. I don’t think I can look through the texts and see one message that doesn’t get me fired up to hit the gym, field, or film room. Having a friend and former teammate like that has been a blessing, we all want to see each other succeed and lift each other up to new heights. There’s nothing else you could ask for from a brother like that.”

Legault has been training one-on-one with Coach Kal at Kalinowski Performance Academy, who also happens to be Cooper’s trainer.

“This man is a genius in the lab (gym), I’m feeling stronger than ever and ready to go out there and absolutely dominate the Pro Day,” he added. “We train 3-4 times a week with one goal in mind, domination.”

There is little doubt in Legault’s mind that he’ll be able to make an impact on an NFL roster if given the opportunity.

“People can expect to see a devoted, hard working, team player who is ready to move anyone who lines up across from me,” added Legault. “I’ll give my all for my teammates and help put us in the best position to win. I like to take pride in my consistency factor, play after play, even when you get beat, line back up and show everyone that one play doesn’t define who you are or the course of the game. Consistency is key, never giving up is key, and bringing out the best in your teammates is key. I’ve drilled this into my head to form it as my permanent mentality. This is everything I’ve dreamed of and worked for my whole life.”

As for Legault’s teammate and fellow lineman Shawn Page, he should be in an NFL training camp when July rolls around. Page’s journey has included a few different stops before he ultimately ended his career in the blue and gold colors. Curran spoke highly of Page’s ability in the run game and also believes he’ll just continue to get better as a pass protector.

“Shawn does a great job getting movement at the point of attack in the run game and can excel in both the zone run game (tight zone/mid zone/stretch) as well as our man/gap schemes,” he said. “Has good feet and can bend, so I believe he will continue to develop as a pass protector.”

Page was heavily recruited by Division 2 PSAC schools and some small FCS programs. After finishing high school, he chose to attend Bloomsburg University where he was a three-year starter. After the pandemic, Page was able to complete graduation requirements and transfer. At that point, he was heavily recruited by a few FCS programs and eventually decided to attend the University of Maine. After the spring season (as a full time starter) he decided that he wanted to leave the Black Bears’ program and head to play at Merrimack.

“I reached out to Coach Curran since him and I had previously spoken the first time that I entered the portal,” Page explained.

The biggest draw to Merrimack for Page – like most of the players joining the program – was Coach Curran and a scheme that truly showcased his abilities.

“He is a straight shooter and a hard worker which is the type of guy that I wanted to play for,” Page said. “You can ask anyone on the team after one of coach’s pregame speeches on a Friday night we’re all ready to run through a wall for him and we know the feeling is mutual. I also believe that it helped NFL scouts notice me because Merrimack has had a solid foundation of getting offensive lineman noticed by the league due to the modern schemes that we run.”

Like Legault, Page has had the luxury of working with someone who has NFL experience while preparing for the next chapter, fellow Bloomsburg grad and New Orleans Saints legend Jahri Evans.

“Jahri is great and he’s always giving me feedback on things that I do well as well as things that I can improve on,” Page explained. “We often talk about things that make guys great in the league. He speaks of offensive line play as a tool box and says that each year he added few more tools to it than the last and he was pretty successful in doing so. Conversing with someone who has been where you are and where you are trying to go is a surreal feeling and just makes the process that much more enticing.”

What does Page plan on bringing to the table on Sunday afternoons?

“People should expect to see an athletic pulling guard who finishes plays well and plays every snap to the echo of the whistle,” he added. “Most of all, a great teammate and someone an organization and a fanbase can depend on in the trenches.”

Last but certainly not least, is Holden. Another four-year starter and All-Conference performer, Holden has had to work a bit harder to get noticed with Darion McKenzie also making noise in the secondary. McKenzie decided to head back to Merrimack for one more season, so Holden is the lone Warriors’ DB entering the 2022 draft.

“Caleb was often overshadowed by McKenzie in the draft process due to his lack of size and McKenzie’s rare athletic traits, but was widely considered the best corner in the NEC this past fall,” said Curran. “Caleb excelled in a defense that is in man coverage over 80% of the time and he brings a ton of versatility playing the field, boundary, and the nickel/slot.He’s  also a dynamic special teams player who will project as a core four guy.”

Holden is a New Jersey native who won a starting cornerback job half way thru his freshman year. Curran also noted that he had the highest vertical leap on the team (43 inches) and was “one of the strongest skill position players in the program.”

“2019 was really the year that I got to prove myself—specifically, the Rhode Island game, where I matched up against two NFL-caliber receivers,” Holden said recently. In that game, he recorded seven tackles, two pass breakups, and an interception.

“That’s when I started to make a name for myself. I continued to build off of that going into the 2020 season. I’ve always known I was a great football player, but that’s when scouts and recruiters really started to notice for themselves. The process has its ups and down, but that’s what comes with the game. I just work hard and focus on what I can control.”

Holden and McKenzie have relied quite a bit on each other as a tandem, serving as sounding boards for one another whenever they needed it.

“On the field, when one of us faces adversity, we come to each other first and we pick each other up,” said Holden. “Off the field, we’re more like brothers than teammates. We support each other through the ups and downs that this game brings, as well as non-football related things. Our conversations can get deep and intense—not because we’re in competition, but because we expect nothing but greatness from each other.”

Like many players that go to prep schools, Holden was overlooked, which made Merrimack an eventual perfect landing spot.

“Coming out of prep school, I believed that I was D1 talent, but many big programs didn’t see that at the time,” Holden acknowledged. “Merrimack not only gave me a chance, but the school made me feel like I was a part of a family. My college football career here helped me get the attention of NFL scouts because this is where I was able to showcase my talent early on. I know God has a plan for me, and no one can take that away. My job was to just put the work in, and Merrimack gave me the platform.”

Holden has been working out at TEST Academy located in New Jersey to prepare for Pro Day.

“Working with Kevin Dunn and his staff has been an amazing experience. Not only do we get Pro Day-specific training, but we also work with countless other people to sculpt our overall lifestyles,” he said. “Like a nutritionist, a mental health doctor and world-class Olympic sprinter, Ato Bolton. I feel like this holistic experience has really allowed me to take my preparation to the next level. I intend to shock many scouts at my Pro Day.”

“No moment will be too big for me,” added Holden. “You’ll see a guy that’s going to contribute everything he can to help his team win games—whether that’s on defense, special teams, or the practice squad. I will maximize every opportunity and bring my team to the top.”

The talent Coach Curran and the staff at Merrimack are churning out is hard to overlook anymore, and the NFL may have an influx of Warriors very soon.

“Merrimack College pride’s itself on being “rugged”, which means working your hardest everyday, never quitting, and lifting your teammates up every step,” added Legault. “Being a Warrior is an identity, embracing the grind everyday.”