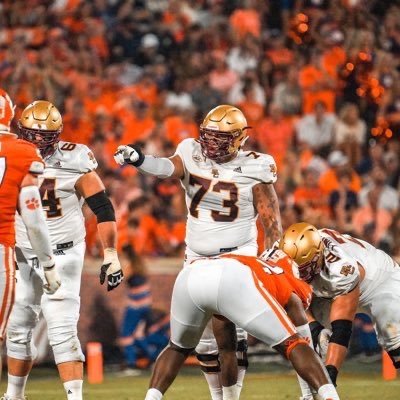 CHESTNUT HILL – Just before the Duke game back in 2020, which also happened to be Jeff Hafley’s debut as Boston College head coach, Christian Mahogany was emotional in the locker room.

Mahogany was about to start a college game for the first time. He had only been playing football for a short period of time compared to other guys in the room. Thanks to veterans like Alec Lindstrom, Zion Johnson, Ben Petrula and Tyler Vrabel, it was a moment he’ll never forget.

“I remember the time, right before we go out, we all hug each other before a game and we all sort of say “come on, let’s go boys, love you all,” stuff like that, they all took me in and were hyping me up telling me it’s my first start, let’s go, that’s something I’ll never forget,” Mahogany explained Saturday morning after the first spring practice session of the season for the Eagles.

“We won, so it made it even better. I’ll never forget those guys. I love them. I’ll talk to them until I’m gone. When they come back for the Pro Day, I can’t wait, we’re going to hang out after and stuff like that. It was sad seeing them leave, but I’m glad it happened.”

Mahogany is now the veteran leader of a very young offensive line after all of those guys declared for the NFL Draft this offseason. Still just a redshirt junior himself, Mahogany has only been playing football for eight years. Now, he finds himself as the elder statesmen of the O-line room and in pursuit of an NFL career himself.

After originally playing basketball. Mahogany played defensive line his freshman and sophomore year of high school because that’s “what the team needed,” Mahogany shifted to offensive line his junior year.

“It was a quick transition,” he said. “I got the spring and summer to learn techniques, sit with my coaches, learn a lot of stuff and things of that nature. Now, I feel like I’m more polished. That’s what everyone says, I’m going to be a guy who down the line is just going to get better because I’m not “football old” yet, I’m still young in that sense. I’ve only been playing football…I think this is my eighth year, so I’m pretty young.”

As far as taking on a leadership role, Mahogany watched as his soon-to-be NFL teammates put on a clinic in how to go about your business each day, while also making sure the younger guys feel involved. As of right now, BC has 14 O-linemen on the roster, but six of them are either listed as freshmen or redshirt freshmen. Kevin Cline (R-So.), Jack Conley (R-Jr.), Finn Dirstine (R-Sr.), Ozzy Trapilo (R-So.) and Drew Kendall (R-Fr.) are the way-too-early favorites to grab starting spots, but guys like Kevin Pyne (R-So.), Otto Hess (R-Fr.) and Jackson Ness (R-Jr.) should all be on the radar too.

That means Mahogany is going to have to play the role of big brother at times, a role he never really could have imagined when he first began playing the game in high school.

“When I came here as a freshman, there was no expectation, I didn’t really know a lot of guys. I only knew Ben because he recruited me,” Mahogany said. “He helped get me here and then as I progressed as a starter, I didn’t have to do much  or say much because there was the four older guys ahead of me.

“Now, growing into that role, I’ve got to be more vocal. Those guys, I still text them even though I don’t want to bombard them too much while they’re all training for the draft and stuff. I wish the best for them, but I’ve got to take a step and be the leader of the O-line and that’s a very special thing at BC. It came fast.”

The new role may have came faster than he expected, but the scouts that serve as the eyes and ears of the NFL are already well aware of Mahogany. Coach Hafley believes he has what it takes to be one of the best in the ACC this year, if not one of the best in the country. Who says you need to play Pop Warner or middle school ball?

“He’s kind of taken that (leadership) role over from the guys we had here last year, he knows what he’s doing,” Hafley said. “He’s worked really hard and he should become one of the best offensive linemen in the ACC, if not the entire country next year and I truly believe that.

“If you watch the film from last year it’ll tell you that. He’s gotten bigger and stronger. With (new offensive line coach Dave DeGuglielmo) I think he’ll help him take the next step he needs and he should be one of the best leaders overall on our football team.”

While Mahogany is embracing the new role, the ultimate goal is to one day join his former teammates in the NFL, adding to the legacy of “O-line U’ over in Chestnut Hill.

“I dreamed of being in the NFL since I was playing video games and stuff like that,” Mahogany said. “I transitioned from basketball to football quick in high school, I had to learn quick, learn physicality and all that. Ever since that, ever since I realized “oh, I’ve got a chance” to get to that level, I knew I wanted to be in the NFL.

“That’s always been a dream of mine. Obviously, I want to leave a legacy, if this is my last year or not, I want to leave a legacy here. I want to win an ACC championship, I want to do a lot of big things before I leave. When it comes time, for sure, I’ll make that quick transition in the spring to working out and I want to become a first round draft pick. I think I have a chance to do that as long as I keep doing what I’m being taught and work.”

There’s no reason to believe Mahogany and the Eagles can’t accomplish everything they want to this year. Mahogany’s legacy should end up right alongside all of the other greats to come from The Heights, but first, he’s got to show he can lead one of the most elite groups in the country.

He’s also got to make sure he upholds certain off-the-field traditions. After all, those are where the truly unforgettable moments take place and where on-field camaraderie is built.

Even if it is just a night out for wings.

“Every Thursday, we’d all go to Buffs,” he said when asked about what he’ll miss most playing alongside Petrula, Johnson, Lindstrom and Vrabel. “We’d all go to Buffs, we all enjoyed each other’s time. We got stronger because of those times off the field.