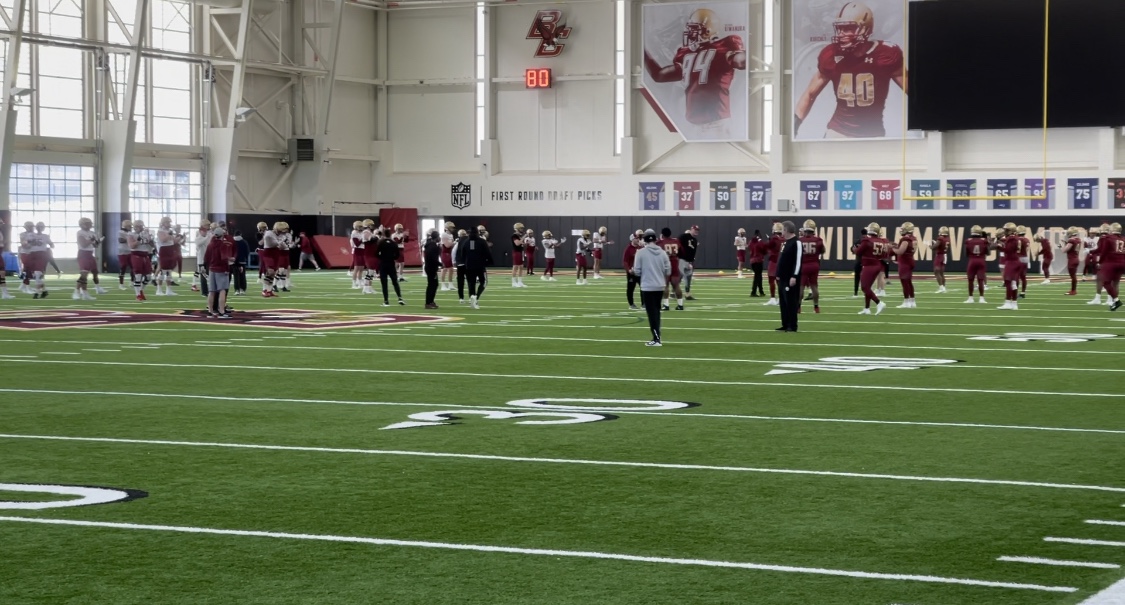 Spring is in the air as the Boston College football team kicked off spring practice this morning. Today’s practice was held in the Fish Field House and it went for a little under two hours.

The atmosphere was lively as usual. You can tell the players have been chomping at the bit to get back on the field after winter workouts.

The tone was set right out of the gate with a spirited pre-practice and run and stretch session. The players followed that up by going to a specialty period and then went to their individual coaches for drills before going into group and team periods.

After practice, head coach Jeff Hafley talked about being back and shared his thoughts on the first practice.

“It’s great to get back together. They [players] had a good winter workout. Coach Matusz and his staff did a good job. They worked hard. Made a lot of good gains. Hafley added: “Today was good. Was it rusty? Yeah. Any first practice is going to be rusty. We hadn’t played football in a while. We haven’t been able to use a football. There was rust but I just said to the guys, I want to see great effort. See everyone excited to be back out here and give everything that they have. I am excited to see the film because I think they did that.”

The Eagles have a lot questions that need to be answered this spring. How will the new offensive coaches get acclimated? Who will replace Zion Johnson, Alec Lindstrom, Ben Petrula and Tyler Vrabel along the offensive line? How do you replace veterans like Brandon Sebastian?

The new coaches seemed to be getting acclimated just fine. I spoke with new offensive line coach Dave DeGuglielmo after practice. He is genuinely excited to be back home and coaching at Boston College, the place where he started his coaching career under Tom Coughlin as a graduate assistant. DeGuglielmo is especially excited to be working with all of the young lineman on the roster. He believes that being the offensive line coach at Boston College is a prestigious position and one of the best assistant coaching positions in college football.

New wide receivers coach Darrell Wyatt has made a good first impression with his players already. Wide receiver Zay Flowers referred to Wyatt as “old school” and that he can relate to him as a fellow Florida guy. Flowers seemed excited to work with Wyatt.

Finding the right coaches was important to Hafley. He took his time and it appears that the coaches that were hired are the right guys for the program.

“You usually have a list and you’re prepared. Guys that you have on your list, you see if they’re available and interested. We kept it a process. We didn’t rush it. We talked to multiple people.” Hafley also felt to was important to find guys that could work with new offensive coordinator John McNulty.

Replacing some of the key seniors from last season is also a priority. Several key contributors from the last two years must step up and lead. Safety Josh DeBerry talked about taking on more responsibility both as a player and as a leader.

“Returners like me and Eli (Elijah Jones) have to step up and have more of a leadership role. Some of the young guys have to step and fill key roles. They have to become leaders as time goes.”

The spring will be a good opportunity for DeBerry and others to take a leadership role and lead both on and off the field.

This is an important spring for Hafley and his staff. With quarterback Phil Jurkovec, Flowers and one of the best skill groups in the ACC back, along with several veterans on defense, expectations will be high in 2022.

If today was any indication, the Eagles are ready to embrace the challenge and meet the expectations.

A lot of work needs to be done in all three phases but the Eagles got off to a good start today. Now it is about stacking practices and getting better. Improvement is the number one thing Hafley and his staff are looking for moving forward.