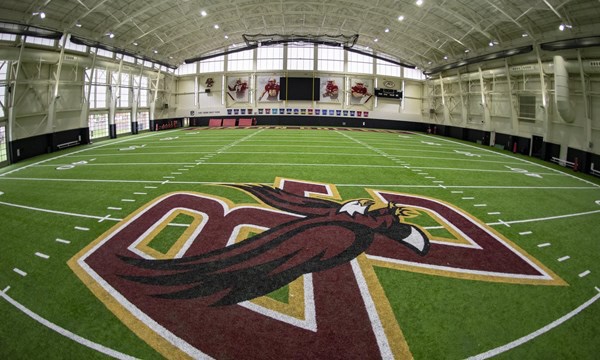 The Boston College Eagles kick off spring practice tomorrow morning in the Fish Field House. The Eagles will have 15 practices before wrapping up the spring with the annual Jay McGillis Memorial Spring Game on Saturday April 9th at 11 am at Alumni Stadium.

Spring ball is always a good time to get an early look at the team and any new players and coaches. Here are five things to watch for as the Eagles kick off spring football.

Jeff Hafley added a lot of experience to his staff this winter. These four coaches should make an immediate impact as the Eagles revamp their offensive system.

Installing a new system and developing a rapport with the players are the two top priorities for the new coaches.

2. Installing a new offensive system: Speaking of the system, new offensive coordinator John McNulty will install a new offense. The terminology might be different but conceptually speaking, the offense should remain the same. It will be a pro-style offense centered around quarterback Phil Jurkovec, Zay Flowers and the skill group.

The Eagles struggled to run the ball last season so expect a heavy dose of the running game early in spring practice. Emphasizing the running game will not only help the backs but it will help an offensive line breaking in four new starters.

Luckily, the Eagles are deep along the offensive line. Many of the back ups from last season that are expected to step up and start this season got some playing time. Ozzy Trapilo, Finn Dirstine, Drew Kendall, Jack Conley, Kevin Pyne, Otto Hess, Kevin Cline and Dwayne Allick are all expected to compete for the four openings along the offensive line.

4. Depth in the secondary: Hafley was able to keep the defensive staff intact which is important as the Eagles look to retool a secondary that must replace several key contributors.

Gone are Brandon Sebastian and Mike Palmer who graduated. Jahmin Muse and Deon Jones transferred. Luckily for the Eagles, there is plenty of talent back.

The Eagles do return cornerbacks Elijah Jones, Jason Maitre and C.J Burton as well as safeties Josh DeBerry and Jaiden Woodbey. They have plenty of talent with their starting group but they will need to develop some depth this spring. It is important when you consider how much nickel the Eagles play and how they use their sub packages.

5. Vibe of the team: The Eagles haven’t played since a season ending 41-10 loss to Wake Forest. The Military Bowl was cancelled due to COVID so we haven’t seen the Eagles in a while. It will be interesting to see what the vibe is with this group.

Expectations are once again high just like they were last season. The Eagles failed to meet those expectations in 2021 but the hope is they bounce back and meet them in 2022. Spring practice sets the tone for the upcoming season. I want to see how much energy this team has heading into year three of the Hafley regime.