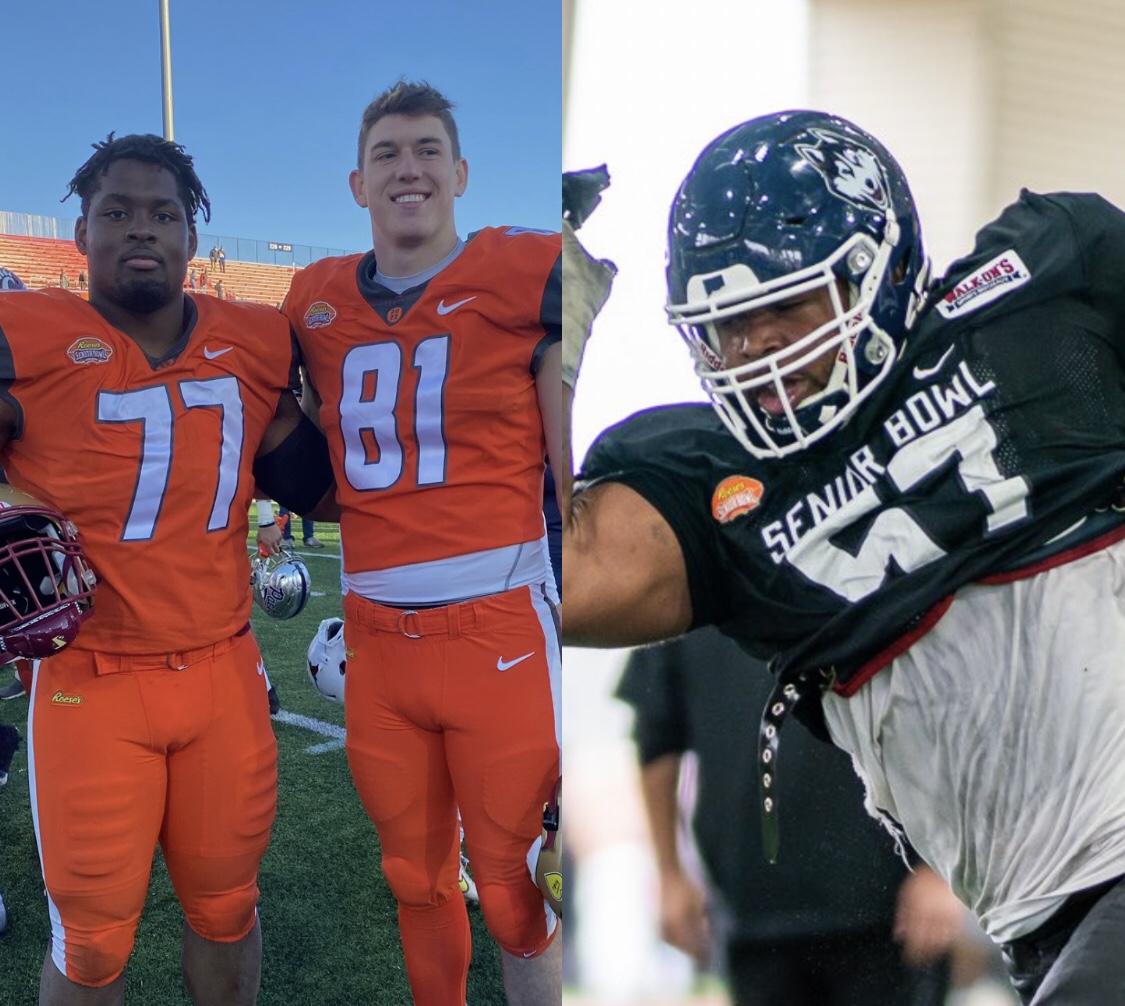 To say Boston College offensive lineman Zion Johnson had a great week for himself would be an enormous understatement.

Johnson was one of the biggest stories to come out of the prestigious Reese’s Senior Bowl week – as was UConn’s Travis Jones – and he also was named the Practice Player of the Week, which is voted on by his peers from both rosters. The now former Eagle showed his ability to dominate at times against some of the country’s elite defensive players, but more importantly, he showed his ability to adapt.

Johnson took reps at center during the week for the first time and then played a ton at the position during the game on Saturday. With zero snap execution problems he looked as if he had been doing it for years. Johnson was also his usual constant self blocking, even holding a tackler off at one point long enough for a teammate to break his grasp and earn a few extra yards.

“Deserving,” NFL Draft expert Dane Brugler of The Athletic said in a Tweet of Johnson winning the practice award. “Johnson is the top iOL (interior offensive line) prospect in Mobile – and you could make the argument he is the top offensive prospect on either roster.”

Many reporters in Mobile tweeted or wrote about Johnson staying after practice to take additional center reps. It’s the little things that NFL scouts and talent evaluators notice and Johnson is one of the highest character guys you will come across, speaking from personal experience.

His head coach echoed the same sentiment through social media after the award was announced as well.

“This does not surprise me at all!” Jeff Hafley tweeted. “Congrats to Zion, huge career ahead. Senior Bowl Practice player of the week!”

Johnson wasn’t alone as far as teammates go when he was in Mobile. After playing in the NFLPA Collegiate Bowl, Trae Barry got a call to head out for the remaining practices and the game. While Barry didn’t get a great opportunity to showcase his talents catching the ball or running after the catch, the fact he was on the radar for one of the most well-known games in the country speaks volumes about his draft potential.

“So thankful for the opportunity to represent Boston College in the Senior Bowl,” Johnson put out on his socials with pictures from the week and his trophy. “It has been an incredible experience!”

Part of the reason Johnson ended up standing out so much during the week was because he had to go up against Jones. Jones burst onto the scene at the Senior Bowl practices and was a wrecking ball at times on defense during the game.

The most attention the UConn football program got last year was for its matchup with UMass. It’s very doubtful anyone involved in the program viewed the mockery from the national media as “attention” worth having.

Throughout this past week, and especially on Saturday afternoon the former Husky made quite a name for himself for folks that hadn’t heard the name already.

The big defensive lineman was a force up front all week going against Johnson often in one-on-one drills and sometimes making it look easy. In the game, Jones was an absolute monster at times. Early on, Jones nearly chased down Malik Williams after initially rushing him with his hand in the ground. Jones turned, sprinted about 15 yards back up field and almost made the play on the elite scrambling QB. On that same drive, Jones was in on a big run stuff too.

Later on, Jones stood out even when he wasn’t necessarily in on the play, pushing the pocket with relative ease seemingly every snap. His best play came late when he earned a sack simply by bull rushing a lineman directly into the quarterback.

“Travis Jones wasn’t just an athletic big man this week, he was a disruptive interior pass rusher, showing that nose tackles can pressure QB’s as well,” tweeted Kent Lee Platte of PFN365. “He was virtually unblockable all week and the few times he was beat it was tough.”

“UConn DT Travis Jones has that “I can do whatever the hell I want strength,” added Austin Gayle, the PFF Director of Content.

Johnson, Jones and Barry, along with Ryan Van Demark, Alec Lindstrom, Brandon Sebastian, Bryce Watts and EJ Perry had quite a week for themselves at their respective showcase games. The NFL should come calling for all of them at some point and the flag for New England college football will only get raised higher when it happens.