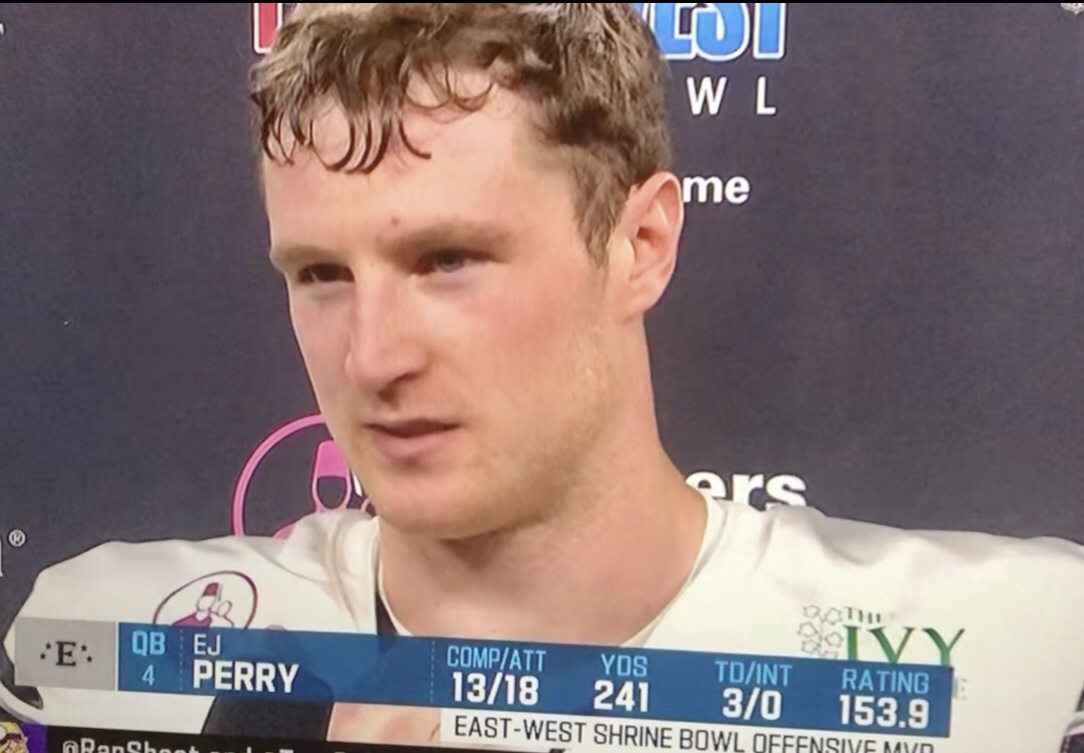 Brown University certainly isn’t a no-name school in the college football world, but compared to somewhere like Michigan for instance, there is no comparison.

A quick Google search will tell you that the enrollment in those two schools in 2021 had a difference of about 36,000.

So, when players from smaller schools get the opportunity to showcase their talent in a game like the 97th East-West Shrine game in Las Vegas, it has the potential to be life altering if those players perform well in the week of practice and then the game itself.

Quarterback EJ Perry put Brown on the map nationally this season when he won the Ivy League’s Player of the Year award, but there’s been very little chatter from the “experts” about him until recently heading into the peak of NFL Draft season.

When the now former Bears QB got the opportunity to start and play the entire second half of the game on Thursday night in front of a huge contingent wearing blue and gold ‘ANDOVER’ shirts, he loudly told the rest of the world just how good he is.

The QB that was once cast off by BC threw for 241 yards and three touchdowns to earn Offensive MVP honors despite a 25-24 loss.

Winning an MVP as an Ivy League QB in a game where the talent is beyond elite is one thing, but winning any All-Star or showcase game MVP as a member of the losing team is almost unheard of.

Numerous reports throughout the week from media members who were in attendance to watch the practices relayed how impressive Perry was, but it took a major summit in Vegas for him to get that kind of attention on a major platform like NFL Network. His ability and great week of practice in Nevada was discussed on the broadcast, but did an NFL fan in Tennessee or Denver know about a possible diamond in the rough from Providence, Rhode Island prior to Thursday?

Coaches flocked to games this past season as word slowly got out, but now there will be folks who fall down the EJ Perry rabbit hole on YouTube because of the performance, and some scouting departments that may have been behind on him will be scrambling for tape.

“I didn’t really think too much about that,” Perry said in the postgame interview on NFL Network when asked if he ever expected to be MVP when he arrived in Las Vegas. “I just wanted to come here and get better.”

Perry led a furious comeback from deficits of 19-0 and 25-8 for the East. The Perry takeover started with 6:20 left in the third on a 65-yard screen pass to Pierre Strong of South Dakota State. The score and ensuing Perry two-point run made it 19-8. BC’s Alec Lindstrom was in at center and sprung Strong with an initial block out in space. Perry added two more touchdown passes (with one more two-point run) after leading some impressive drives in the fourth quarter.

Perry’s third TD and an East two-point conversion cut the deficit to 25-24 with 1:32 left, putting Perry an onside kick away from having a possible game-winning drive opportunity, but the West recovered and held on.

“There were times during our season where I pressed in situations where I was down,” Perry acknowledged. “This was another opportunity for me to show I’m not going to do that anymore. I’m sure (uncle and head coach James Perry) is proud, he’s drilled that into my head. Just execute the play calls and you’re able to put yourself in a position to win. Unfortunately, we weren’t able to do it but the offense fought until the end.”

The most impressive things about Perry were his composure, quick decision making, ability to take off when the pocket broke down and a strong arm. He was also very elusive at times and still maintained vision downfield to create positive plays. Perry had the chance to make just about every throw you could want to see from a potential draftee in a comeback situation during live game action.

The EJ Perry Show may now be coming to a TV near you on Sundays.

“They set up an amazing game,” Perry added on the expereicne. “We got to learn all week from NFL coaches who taught us to much…we got to learn a playbook in a week which is something we’re all going to have to do in minicamp and it was great practice for that and it was an unbelievable learning experience. I’m just fortunate to have had it.”

While Perry, defensive MVP and teammate linebacker Diego Fagot from Navy were the main stories, Brandon Sebastian and Lindstrom represented Boston College in the game and both had an impact.

Sebastian seemingly never left the field, making a goal-line tackle early in the game and then nearly coming up with an interception on a jump ball down the sideline later in the game. Defenses were only able to run Cover 1, 2 or 3 due to game rules, but he put some good stuff on tape coverage wise as well, which is ultimately the main goal in these games no matter how much playing time you get.

Lindstrom had a tough exchange with Kent State QB Dustin Crum in the first half that ended up as fumble (recovered by Crum), but he made up for it big time in the second half with that block on the screen pass TD to get the comeback rolling.

UConn’s Ryan Van Demark started at left tackle and got a fair amount of reps, putting some good tape together, particularly in the run game. UMass DB Bryce Watts was also on the East roster in what was ultimately another fantastic night for New England football as the players playing at the high school and college level in the six states continue to impress on the biggest stages.