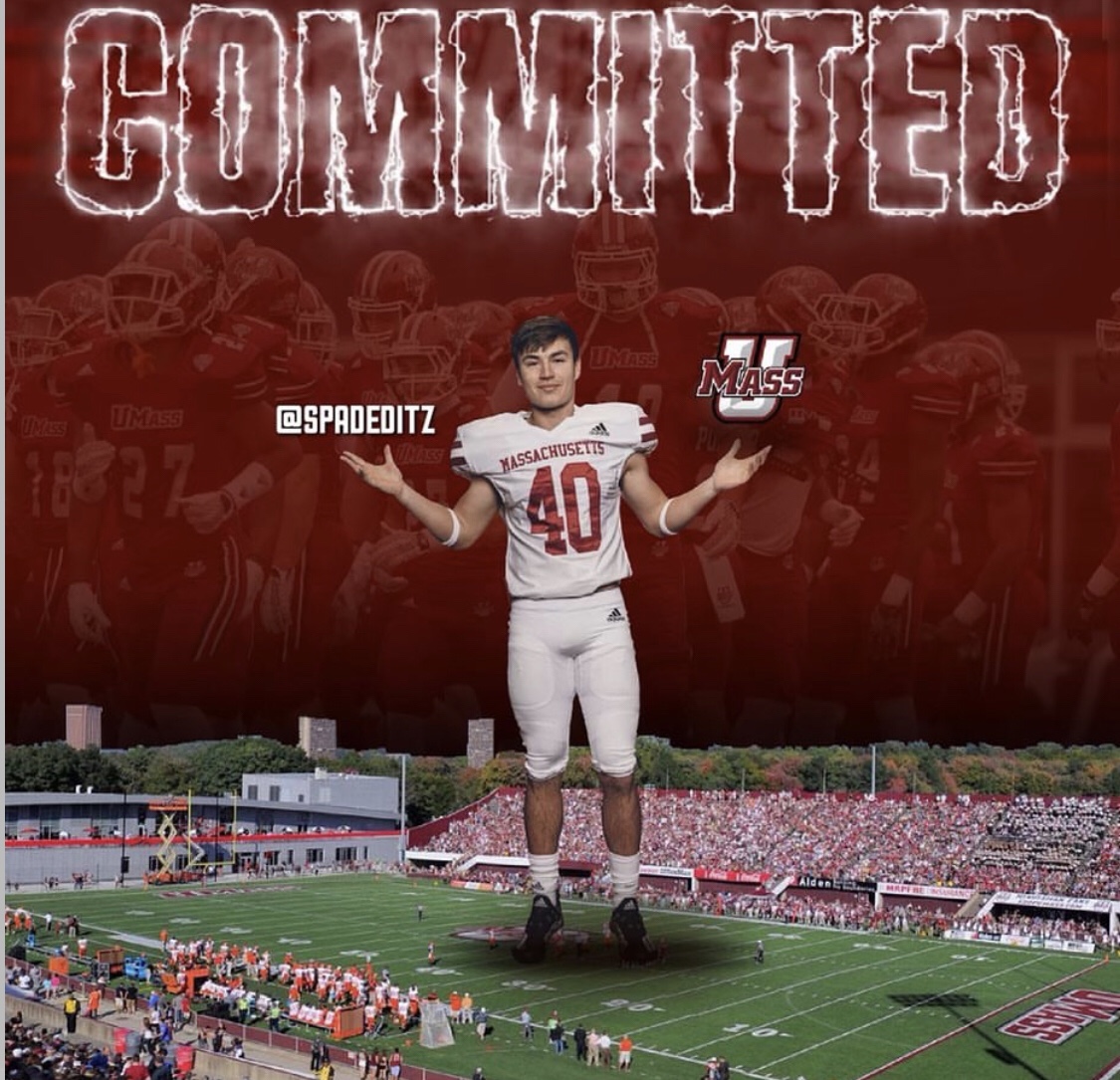 A couple weeks ago, we posted a story about Adam Vinatieri’s son AJ possibly bringing the legendary last name back to the forefront of New England football when he had UMass as an option for his college destination.

On Monday night with roughly 700 people watching live on AJ’s Instagram page, he put on a UMass hat while the whole family revealed they were wearing UMass shirts, including Adam. Soon thereafter, social media erupted with the crazy UMass fan base reveling in the news that the Vinatieri name would once again be relevant in the area. Even former Colts punter turned podcast star Pate McAfee threw something up on Twitter saying he was now a UMass fan.

The newest Minuteman spoke to NEFJ on Tuesday night and shared why he chose UMass, which was in a group with Indiana, South Dakota State and LSU as the final options for the latest “local” sensation.

“I honestly felt that UMass was the best fit for me,” he said. “The entire coaching staff showed so much love and I was really excited to be a part of their team. I had a lot of PWO offers and when they offered me a scholarship, it truly showed how much they valued me and that meant so much.

“I love the area, the coaching staff and they have a great business school, so all in all it felt like the best fit. The fact that coach Brown trusts me enough to come in and compete right away at the start spoke very highly to me and I can’t wait to play for UMass.”

When we last talked to AJ, he said he was actually leaning towards punting more than kicking. While he would love to do all three, it sure seems like the Minutemen are looking at Vinatieri as a weapon in the punting game.

“I’d love to do all three, but UMass told me they need a punter right away and I was their guy,” AJ explained. “I want to do as much as I can for the team and fill as many roles as I can. If an opportunity presents itself at those other positions I would love to step on the field and help my team win as much as I possibly can.”

It’s been a wild 24 hours for New England fans who celebrated AJ Vinatieri’s commitment on Monday night as if Adam was signing back on as the Patriots’ kicker. Just hours after the young Vinatieri committed to carrying on the family legacy in New England, his father’s old teammate Tom Brady officially retired.

AJ never really had any memorable interactions with Brady since Adam was already in Indianapolis by the time he was old enough to start taking things in, but he still looks up to the GOAT and even got a brief little pep talk before a playoff game this season.

“I don’t remember many interactions with him, but I respect him so much and I really look up to his mentality,” added AJ. “He sent my team and I a good luck message before the state game and that truly meant so much. The amount he’s been able to accomplish is super inspiring and he is the GOAT.”

All of those Brady accomplishments may never happen unless Adam Vinatieri kicks a few massive field goals early on in the dynasty. Now, AJ will be looking to extend the family legacy in these parts while helping UMass get back to respectability.

Get those blue No. 4 jerseys out of the closet, iron the jorts and fill the coolers with Bud Lights, time to pack up the tailgates and head towards Amherst.