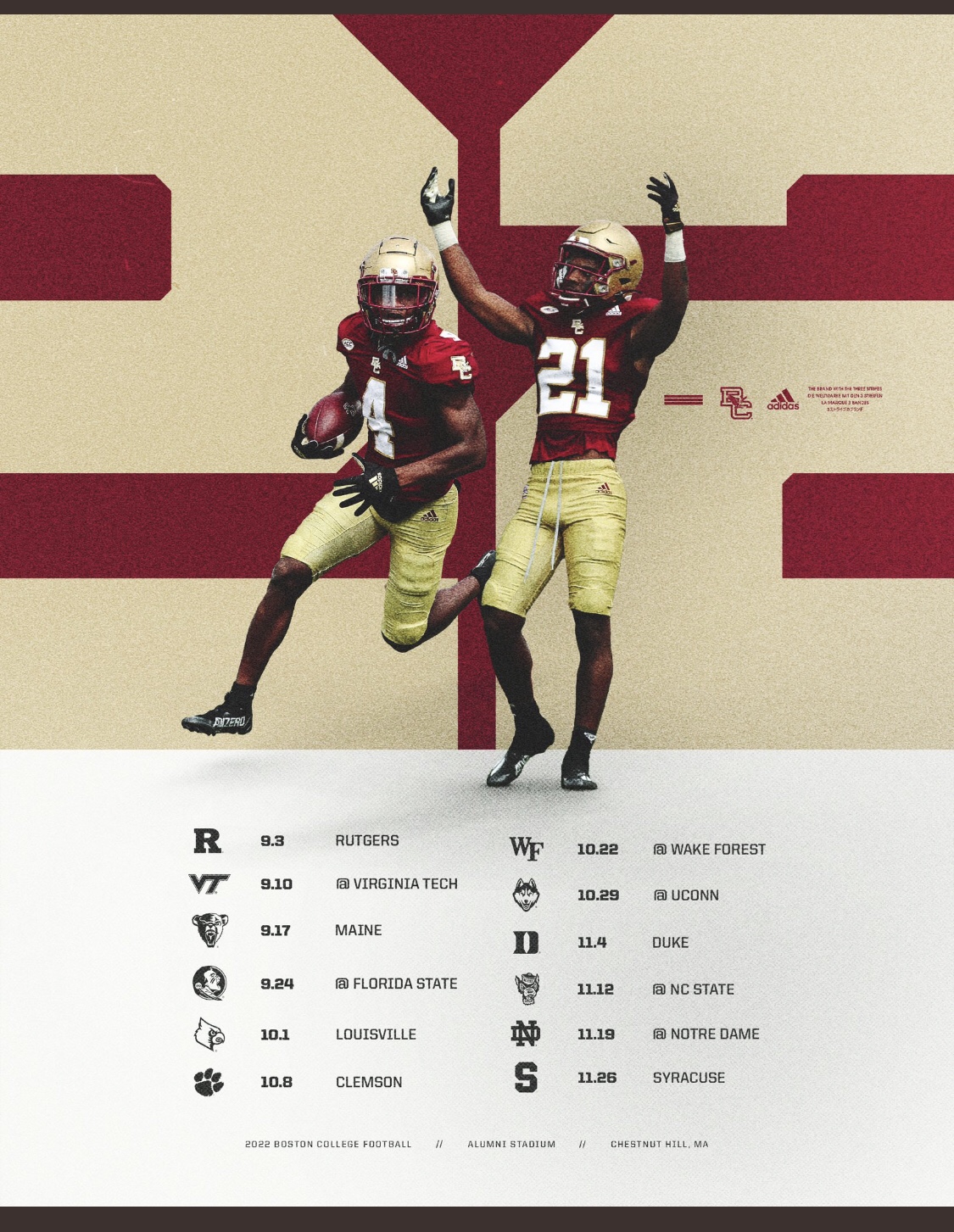 We’ve got dates people, the season will be here before you know it.

Beginning at 7 P.M. on Monday night, the ACC Network and then the BC football Twitter account began revealing the dates for the 2022 season. We also found out that the Eagles’ spring game will be April 9 and air live on ACC Network.

Year three of the Hafley era officially begins September 3 when Rutgers visits Alumni Stadium. It’s an intriguing start to the year as Rutgers went 5-8 last season, but should come in and play hard wanting to make an immediate early season statement against a longtime rival in the Northeast. BC is 13-0-1 in the last 14 matchups with the rivalry dating back to 1919.

The Eagles get an immediate test on the road in Week 2 when they head to Lane Stadium for a matchup with Virginia Tech on September 10. The Eagles hung around with the Hokies before things sort of rolled downhill in their last visit to Blacksburg in 2020. Last year, VT visited for the Red Bandana game that the Eagles won.

BC returns home in Week 3 for a matchup with Maine on the 17th. The Black Bears haven’t beaten the Eagles since 1915, but with a new head coach it’ll be an opportunity for a young FCS team to try and make some noise against a potentially ranked opponent. It’s also got trap game written all over it given BC’s next opponent.

It’s right back into hostile territory early for the Eagles as BC travels to Florida State (9/24) for a Week 4 showdown. The two road games in extremely hostile environments – regardless of where the programs are related to their past success – in the first four weeks of the season will tell folks a lot about this team in 2022. Going in to Tallahassee and Blacksburg and getting two wins before the calendar changes to October would be incredibly impressive.

Week 5 is going to be a critical week for the Eagles regardless of what happens against Florida State. Louisville visits October 1, and it’s not necessarily a critical week because of anything Louisville could do, but because it could be another trap or look-ahead game for BC.

That’s because Week 6 gives everyone associated with the Eagles what they’ve been waiting for seemingly forever now when Clemson comes to Chestnut Hill on October 8. Depending on how both teams have performed up to that point it could be a College Gameday game, or at the very least, in prime time. BC hasn’t hosted the Tigers since 2018 and it would be natural for that Louisville game to not get everyone’s full attention.

An open date or bye week follows the big matchup with the Tigers, falling at an ideal time for both players and coaches alike. Everyone can hit the reset button and get ready for the final six games of the year, unlike last year where BC went non-stop for far too long.

Weeks eight and nine are interesting road trips. The Eagles will face Wake Forest on October 29 and then renew a New England rivalry when they head to UConn on October 29. Wake Forest obviously had incredible success last year and it’ll be interesting to see if both teams are in a position where that game could determine ACC title game contention. The Demon Deacons also embarrassed the Eagles on Senior Day last season, so there will be an element of payback in that one. The meeting with a UConn program now led by Jim Mora may not be nearly as lopsided as it would have been in recent years and it’s always nice to see New England teams facing each other.

November 4 sees the return of “Friday Night Lights” to Alumni Stadium when the Eagles host Duke. The Blue Devils have struggled recently, but are just four years removed from winning eight games in 2018.

The Eagles are back on the road for back-to-back games Week 11 and 12, heading to NC State on November 12 and then renewing the Holy War in South Bend on November 19. NC State seemingly always plays BC tough, and talk about a possible look-ahead game if there ever was one, depending on how good or bad the Wolfpack are of course. The game at Notre Dame could be a classic, especially with Jurkovec returning one more time and former tight ends coach John McNulty now calling plays for BC as the new offensive coordinator. The Eagles also owe Notre Dame a bit of payback after the Fighting Irish beat BC in the Red Bandana game in the empty stadium year of 2020.

The Eagles close out the regular season against Syracuse on November 26. BC barely squeaked by the Orange in 2020 when Jurkovec was injured, then lost in 2021, only scoring six points.

Overall, it’s an exciting schedule for BC fans, especially this year’s home schedule as there’s some really great potential for electric atmospheres at Alumni.

Year three of the Hafley era is officially just 214 days away.