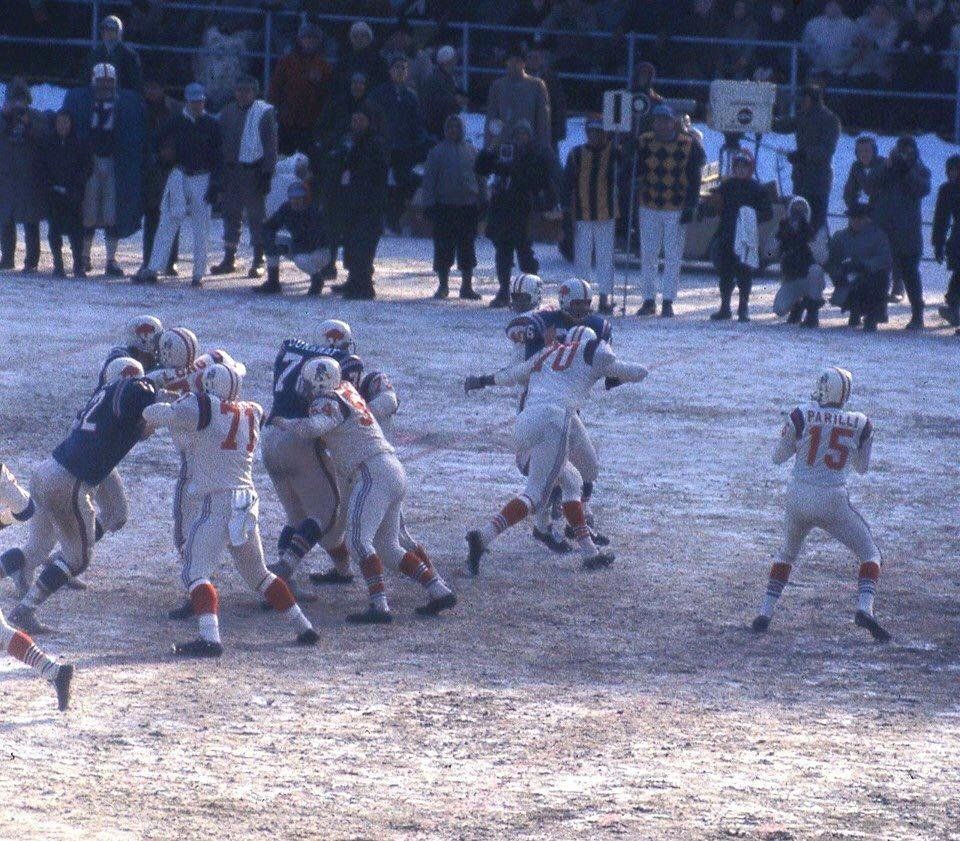 When the Patriots and Bills meet in the postseason for just the second time in history Saturday night, the game might actually look a bit like the first playoff meeting between the two teams.

On December 28, 1963, the Boston Patriots went to War Memorial Stadium in Buffalo, NY for an AFL Eastern Division playoff game and came away with a pretty dominant 26-8 victory.

You wouldn’t think it, but there are actually a few similarities between how that game played out and how the Patriots will have to play in order to win on Saturday night.

First things first, the 1963 meeting was played in 21-degree weather, but with an 11 MPH wind, the windchill was only 9-degrees and the field was frozen. It’s actually going to be colder on Saturday night, but I highly doubt guys like Gino Cappelletti and Babe Parilli had to answer any questions about how they’d prepare for it or how many layers they might wear. Mental toughness was and is crucial.

Speaking of Parilli, he threw for 300 yards and two touchdowns despite going just 14-for-35. Mac Jones probably won’t be throwing for 300 yards, but he may have to throw at least a couple touchdowns if the running game stalls.

Ah yes, the running game. The key to the first victory this season & a big factor in the second meeting despite the loss. Damien Harris and/or Rhamondre Stevenson will have to have a better day than Larry Garron and the team as a whole had running the football back in 1963.

Garron carried the ball 19 times but only for 44 yards. Five other guys carried the rock a total of 17 times, but only mustered for 39 yards. Garron did haul in touchdown passes of 59-yards and 17-yards and had four catches for 120 yards though. Someone may need to step up with a similar performance this weekend.

Cappelletti may have been the sneaky MVP of the game, booting four field goals (28, 12, 33 & 36) while also racking up 109 yards receiving on just four grabs, including a 51-yarder.

Much like it will need to be on Saturday night, the Patriots defense in the very first meeting was the story, forcing Buffalo to turn the ball over six times while holding the Bills to 286 total yards. Bob Dee and Ross O’Hanley led the way with two interceptions each while Tom Addison and Billy Lott each recovered a fumble. This version of the Pats defense will undoubtedly need to create turnovers – maybe not six of them, but a few – in order to keep the season alive.

Of course special teams will play a huge factor too, just like it did 59 years ago. We mentioned Cappelletti’s four field goals – something Nick Folk may have to match – but the Bills actually got a big performance from Elbert Dubenion, who racked up 136 return yards. The New England field position game hasn’t been great lately whether it’s the punt game or the kickoff game, and surely that type of performance from anyone on the Bills’ special teams unit may spell trouble for the Patriots.

Now, obviously the game of football has changed drastically over the last six decades and Saturday’s game won’t look anything like the first matchup back in the day. Still, in terms of how that game played out, it’s pretty wild to look at some of the ways the old Fightin’ Pat Patriots won that frigid day in New York and compare it to what this team needs to do to escape Orchard Park on Saturday night.

It also shows us that defense still wins championships, so can this one rise to the occasion? Can Mac pull a Babe Parilli? Can Nick Folk pull off a Gino-like performance (minus the receiving of course) and who’s going to be the next Larry Garron?

The more things change, the more they stay the same and that may ring true for these two longtime rivals on Saturday night. Just don’t expect to see any one-bar face masks or members of Bills Mafia wearing sophisticated suits, ties and hats…but they may be on fire.