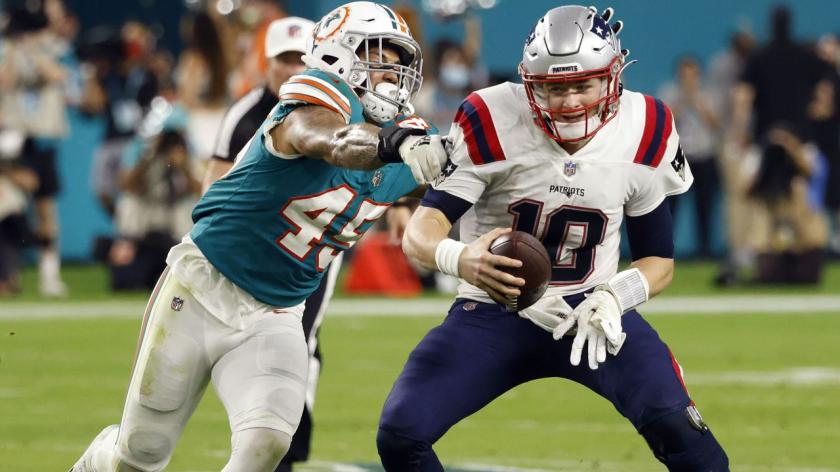 
After talking so much all week about needing to build upon the Jacksonville game and gain some momentum heading into the playoffs, the Patriots had arguably its worst performance of the season in the finale against the Dolphins on Sunday afternoon.

For the third time in four games since the bye, New England no showed early and built an almost immediate hole that was ultimately too big to dig out of. The result of another lethargic beginning to the game was a 33-24 loss.

Buffalo ended up winning the division by holding off the Jets, but it was dicey for a while in Orchard Park, which made the Patriots’ performance that much more stunning with so much still on the line. The Patriots finish the year as the No. 6 seed at 10-7 and thanks to a wild Raiders win on Sunday Night Football, New England will head back to Buffalo for a third matchup this season on Wild Card Weekend in prime time next Saturday (8:15 PM).

Dumb penalties – although the officiating was putrid at times on Sunday – turnovers, poor tackling and just an overall lack of execution and zero sense of urgency were all on display. The Patriots have seemingly reverted back to the 2-4 version of themselves rather than the team that won seven straight. Now. Josh Allen, Stefon Diggs and that Bills defense is waiting with a chance to officially slay the dragon with a postseason win against The Hoodie.

The most troubling part is there are only five days to get it figured out or the season will suddenly be over.

“Obviously played poorly, coached poorly, didn’t do anything very well. So just too many — too many mistakes, way too many,” said Bill Belichick. “So… we’ll go look at the film, turn the page here and make some corrections and move on to next week. So that’s really about it.”

The Dolphins opened the game with a far-too-easy 13-play, 77-yard drive that chewed up the first 7:26 and ended with a pretty toe-tap touchdown catch for Jaylen Waddle on a 7-yard throw from Tua Tagovailoa (15/22, 109). Just over a minute late Xavien Howard read a horribly telegraphed Mac Jones throw and picked him off, waltzing 37-yards for an easy pick-six and a 14-0 lead.

A field goal early in the second pushed the Dolphins lead to 17-0 before the Patriots finally got on the board with a 15-yard touchdown run from Brandon Bolden, capping a 7-play, 74-yard drive. Miami carried the 17-7 lead into the half. The Patriots had a few different chances to put points on the board but wasted possessions whether it was penalties (8 for 78 yards) or miscues.

“It’s super embarrassing, honestly, just from my point how I played,” said Jones, who was visibly hard on himself at times on Sunday. “Wasn’t good enough. And I can be better. And it starts with me. I’m the quarterback. And that’s my job is to make people around me have success. And it starts with me, so we’ll get it fixed. I think, like you said, you know, you’ve got to watch the film and learn from it and realize how embarrassing it is to play that way. But, at the same time, we’ve got a great opportunity next week. And that’s all you can ask for.”

The Pats opened the second half with a 13-play drive spanning 50 yards, but had to settle for a 43-yard Nick Folk field goal, cutting the deficit to 17-10. Miami quickly responded with an eight-play, 75-yard much aided by a Jalen Mills (questionable) PI call and an offside penalty on Deatrich Wise. Duke Johnson (25/117) finished the drive with a 1-yard TD run to push the Dolphins lead to 24-10 with 4:37 left in the third.

Six plays later Jones fumbled a snap and Miami fell on it at the Dolphins’ 24. Miami made it hurt in the form of a 49-yard field goal with 11 minutes remaining.

Jones (20/33, 261, 1 TD, 1 INT) and the offense showed some life on the next drive and Bolden had an 18-yard touchdown reception to cut it to 27-17 with 6:40 to go. After the defense forced a three-and-out the offense only needed six plays to move 76 yards – thanks in large part to a 39-yard completion to Jakobi Meyers – before Damien Harris rumbled in from a yard out to make things interesting at 27-24 with 2:57 remaining in the game.

The defense’s inability to stop the run was an issue again and Miami was able to burn most of the remaining time on the clock. The Patriots did get the ball back with less than 10 seconds left on its own two, and fittingly an ugly, odd looking pass by Mac was picked off (it was ruled a fumble by Meyers) by Sam Eguavoen for a touchdown, giving the Dolphins the 9-point win.

“We’ll have to watch and see. The running game is always tough to know exactly what it was, like, as soon as the game ends. But a couple plays on the edge, the one to Johnson and then the quarterback scrambles hurt us too. So run game is always about consistency play after play. And we just fell short today,” McCourty said of the issues with the run.

Just like that, this strange season has come to an end. At the beginning of the year if you had told Patriots fans a rookie quarterback would make the playoffs his first year you’d take it. The problem is, when the AFC exposed itself as a weak conference this year and the Pats sat atop the pile of mediocrity late in the season with a bye in hand, the result should have been better.

There should be a home game at Gillette. There should have been a first round bye or at the very least a No. 3 seed and a division title. Instead, the Patriots fell apart down the stretch and may have lost one of those “we can steal one” Super Bowl seasons.

That’s not to say this team can’t get hot and make a deep playoff run, the AFC is bad enough for it to happen. But, it’s hard to wake up Monday morning staring a rematch with a hungry Bills team in the face and be happy with where this team is at, especially after the performance in Miami.

“Don’t have a choice. Start next week,” McCourty added when asked if the team was ready for the playoffs.

Sunday had a 2009 Houston feel to it. The Patriots lost Welker that day and got embarrassed at home by the Ravens a week later. Is this team headed for the same fate? It sure feels like it.