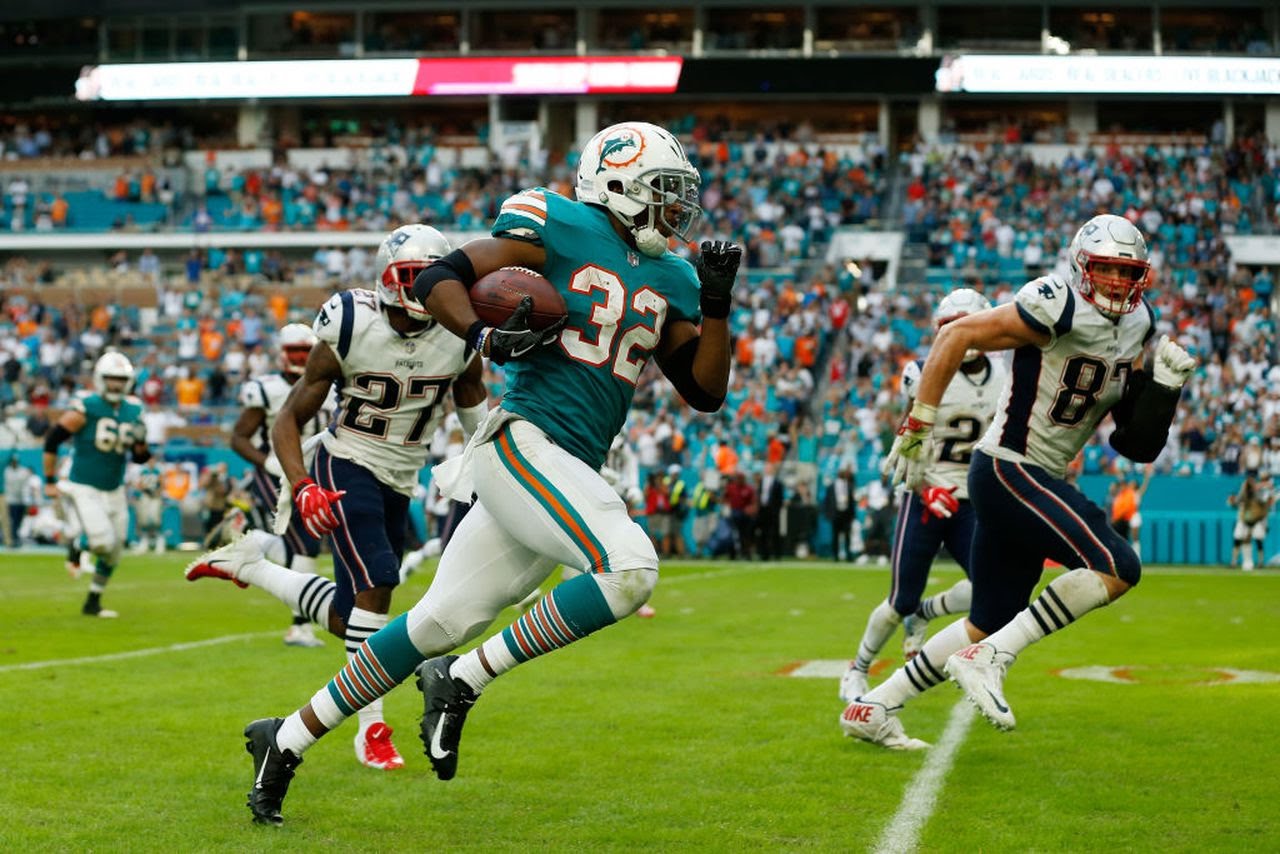 Hello and welcome to week 18! That feels weird to type but it is our new normal in the NFL after the expansion of the regular season from 16 to 17 games. The Patriots have a division matchup in week 18 with a familiar foe and one that they have some bad memories with, the Miami Dolphins. The Dolphins have been on the cusp of making the playoffs this year mostly due to an easy schedule, but they’ll be motivated to beat the Patriots as always.

Lets break down the X factors.

I need an opportunity to talk about what the Patriots did last week. My score prediction was 31-10, a proper whooping, but the reality was much darker for Jacksonville. It looked like the Patriots were playing a Division 6 high school team, not a supposedly professional football team. But it is the Jaguars. What can possibly be taken out of a game where the Patriots dropped 50?

First of all, they did what they were supposed to. Good teams beat the crap out of bad teams, that is just what they do. The Patriots were the better team in every single facet on paper, but the question was does that translate to on the field success? It certainly did. Mac Jones harassed the Jags’ secondary to the tune of 227 yards and 3 scores on 73% passing. Kristian Wilkerson had the game of his life with N’Keal Harry inactive, hauling in 2 TDs on 4 catches from Mac. He brought a spark to the offense and Mac was able to find him on 2 long tosses. The run game was churning like butter, the Patriots totaled 181 rushing yards, including 142 of those yards and 4 TDs from Rhamondre Stevenson and Damien Harris. The offensive line was handling Jacksonville with ease, as they should have. The offense was a well oiled machine and it will go a long way going into this week against Miami.

The defense was absolutely suffocating as Myles Bryant, Kyle Dugger and JC Jackson all ended the day with an interception on Trevor Lawrence. He has been prone to turning the ball over all year, but 3 picks in one game is impressive for New England as he hadn’t thrown one in 3 games prior. Lawrence ended the game with a 57.1 QBR, his second lowest of the year. Jacksonville only rushed the ball 15 times for 64 total yards as the Patriots controlled the line of scrimmage on defense as well. Dont’a Hightower and Christian Barmore were both able to sack Lawrence in the winning effort as well.

The valid point that will inevitably be brought up is: who cares? It’s the Jaguars! But it means something. It creates serious momentum for players and coaches and gives confidence to the Patriots who needed it after their skid against the Bills and Colts. It isn’t a tangible thing that you can point at but the Patriots had their backs against the wall a bit after a hard fought loss at home against Buffalo. They needed to remind themselves who they are. They achieved great balance on offense, they were absolute ballhawks on defense and they controlled the trenches completely. Sure, it was an inferior opponent, but the Patriots determining how they would win the game is a beautiful thing to see. They need to ride that momentum into a pivotal Miami game this week.

Win the TO battle

Obviously! This seems simple and is something Bill Belichick mentions ad nauseum. But there is a reason for it. According to footballperspective.com, based on statistics collected during a ten year sample size from 2007-2016, NFL teams that won the turnover battle won their game 78% of the time. There are similar stat trends like teams who have 100+ rushing yards win most of their games, but those stats can pretty easily be influenced by other factors. If you are winning a football game, you are naturally going to be running the ball more down the stretch to bleed clock/keep the opposing offense off of the field. This is a good example of the adage “correlation does not equal causation”. In essence, these rushing yard trends don’t mean that teams win BECAUSE they run the ball, they run the ball BECAUSE they are winning.

Turnovers are not as prone to those data errors. Ask any football coach how significant even one turnover can be in a closely contested game. And at the beginning of the year, the Patriots were plagued with inconsistency on both sides of the ball. Turnovers were no exception. The first six weeks of the season, they had eight fumbles, losing five of those. Defensively, they only managed to force three fumbles, recovering two of those. During their win streak, they only lost two fumbles from the three times they put the ball on the ground, while forcing ten fumbles and recovering four. Belichick commented during the win streak about the turnover battles, “We hadn’t gotten any fumbles out in I don’t know however many games it was. We went back and looked at a lot of things and tried to address it……And we were losing the ball as well, so we just tried to address things as a team. I think we’ve done a better job of coaching, the assistant coaches, and myself, all of us, I think we’ve done a better job of coaching it. I think the players understand what we’re trying to do.” Belichick and his coaches emphasize this and for good reason. It can make the difference between a red hot team that’s ripping off wins and a talented but inconsistent team who can’t find their stride.

So why does it matter for this game more than others? If you remember back to week 1, it was a battle till the end and the Patriots were driving down the field for the game winning field goal. With 3:30 remaining in the game, Damien Harris had the ball knocked out of his hands which allowed the Dolphins to run the clock out and tip toe their way out of Gillette stadium with the victory. A lot has changed since week 1 and I do think it’s appropriate that they are near touchdown favorites on Sunday even on the road, but this doesn’t mean it is a sure thing. Miami won the turnover battle in that game and it ended up being the difference, JC Jackson picked off Tua Tagovailoa one time but the Patriots had costly fumbles by Jonnu Smith and Harris which ended up being the difference.

It would be easy to call the Harris fumble unlucky and say the Patriots are a different team now than they were then. But if you remember back to the Buffalo game last year they had a costly fumble down the stretch by Cam Newton that cost them the game and essentially their shot at the Playoffs. Now I’m not going to try and say this is a trend because it isn’t and Newton is stinking it up in Carolina, but there have been some vital turnovers in big moments in recent memory. Tua is liable to turn the ball over and the Titans were able to rough him up last week, sacking him 4 times and the ball looked like a hot potato at times in his hands.

In a huge matchup to end the year, the Patriots’ defense needs to create chaos and pre snap looks that throw Tua off of his game. He gets the ball out of his hands lightning fast when he is in rhythm and the Patriots either need to make him hesitate, or make him throw the ball into congested windows. On offense, HOLD ON TO THE FOOTBALL. Mac has done a great job taking care of the ball in most games this year, Harris and Stevenson need to hold the ball like their life depends on it.

The Patriots have been…..bad against the Dolphins in Miami. Not that Patriots’ fans have to be reminded of that, but it is certainly in players’ and coach’s minds. My friend and NEFJ founder John Sarianides wrote an article about their troubles in Miami a few days ago, which you can read here. New England has an all time record of 17-39 in Miami and it has been even worse recently with losses in 2013, 2014, 2015, 2017, 2018 and 2020. Everyone remembers Gronk tripping over his own feet to lose in 2018, but this has been more than just a fluky trend for New England. No matter how good the Patriots are or how bad the Dolphins are, it is never easy.

Whether is is the heat in the Miami that throws off the players during the cold New England winter or just a monkey they can’t get off their back, they cannot ignore how bad they’ve been in Miami. Bill Belichick turned up the heat in the indoor practice facility to prepare for the environment in Miami and that is a good move. I am sure he has addressed it with the team because this is something that needs to be taken head on. The good thing is the Patriots this year look a lot different than past teams. They have new faces on both sides of the ball that have not really been exposed to the “Miami curse” which should inject some fresh perspective into the locker room. While I’m sure Mac Jones has heard about the Patriots’ struggles, he does not have the weight of years of struggles on his shoulders.

So how do the Patriots take this head on without letting it become a distraction? Use it as a challenge! This is a Patriots team that already lost to Miami. Their record the past ten years in Miami has been horrible for Belichick and Co. Face it like a man and challenge your players to buck the trend. It is not very often in recent history that the Patriots have been able to take the scrappy underdog label. They are a not an underdog in this game and have not been one very often this season, but for the team inside the locker room it doesn’t matter. If you’ve been in a football locker room before, you know all that matters is what the people inside the room believe. If the Patriots can convince themselves that they’re disrespected, have been labeled chokers when they travel to Miami and people are talking about them that way, then they can use this curse as a challenge. That is up to Belichick and Co. to convince the players of.

In the first week 18 in NFL history the Patriots have to travel to Miami and we wouldn’t have it any other way. There have been ups and downs all season long with this Patriots team and in some ways this is the perfect way to end it. Week 1 started with a lot uncertainty and the Patriots dropped a game to an inferior Dolphins team which rightfuly scared some people. I think this is a different Patriots team than we saw week 1 and a different Patriots team than the ones who have struggled in Miami. It’s a division game in enemy territory so I don’t expect a blowout but I think New England gets it done to ride some high energy into the playoffs.