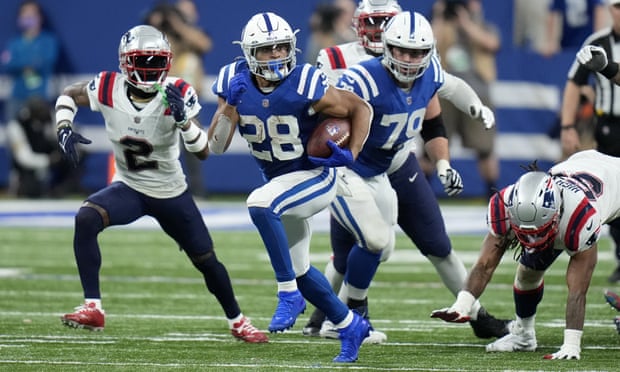 
With three games left in the regular season, do we know who this Patriots team is yet?

With a somewhat jarring 27-17 loss in Indianapolis on Saturday night, New England not only had its seven-game winning streak snapped, but also lost a grasp on the No. 1 seed in the AFC. For the first time since October, the Patriots looked like a team with an inexperienced rookie quarterback leading them into a truly hostile environment against a fully loaded roster.

“We let them get into the game a little bit, you know, too early,” said Hunter Henry, who was the recipient of two Mac Jones touchdowns. “We came out way too slow, you know, turned the ball over then get a punt blocked and then just stall offensively. I mean, we just never got anything going, so it’s easy for their fans, to I mean, to really get into it. I mean, they did a good job of that.”

Mac Jones threw the ball 45 times, completing 26 of those passes for 299 yards and the two touchdowns to Henry, but it was his two interceptions that linger the most after this game. The Colts made Mac look like a rookie really for the first time this season and it was bound to happen. It’s hard to win every week in the NFL, but the seven-game win streak never provided a true test aside from Los Angeles and Buffalo, and even those were outrageous circumstances.

Jones and the Patriots did show fight in the second half, but after so many above average performances the last few weeks from the entire team, watching the Colts win the game throwing the ball 12 times while handing it to Jonathan Taylor – probably the NFL co-MVP with Brady – 29 times for 170 yards and two touchdowns was a painful pill to swallow for Pats fans.

The most concerning part isn’t the loss itself, it’s the flat start and just an overall uneasiness watching that game and watching the Colts make the Patriots look much worse than we all think they are this late in the season. The Jones question has been there all along, but the inability to stop the run, having punts blocked and committing some brutally timed penalties in Week 15 isn’t a great sign.

“Obviously we didn’t do anything well enough to win. We didn’t play well and we didn’t coach well,” said Bill Belichick. “Too many penalties, fumbles, interceptions, over 200 yards rushing. We played from behind the whole game, so just nothing really good enough. We have to go back to work here, coach and play better next (game). It’s disappointing, but we’ll move on.”

Indianapolis had its way with the Pats upfront all night and it started on the opening drive of the game. The Colts and Taylor went to work early, taking eight plays to drive 78 yards. The drive finally ended when Wentz (5/12, 57 yards) hit Nyheim Hines for a 8-yard TD pass in a bit of the old “Philly special” look from head coach Frank Reich.

Things got worse in a hurry when Indy blocked a Jake Bailey punt and E.J. Speed recovered it for a touchdown, putting the Pats in a quick 14-0 hole.

After a New England punt, Indy went on another long trek downfield, this time taking 10:29 to move 58 yards, with Mike Badgley booting a 25-yard field goal that made it 17-0. Jones finally got his feet under him a bit on the ensuing drive and the Patriots reached the Colts’ 15 with less than two minutes to go in the half, but an under thrown ball to Henry was picked off by Darius Leonard.

Three plays into the third quarter Jones threw another interception, this time looking for Brandon Bolden on a quick out. The throw was a bit late and intercepted by Bobby Okereke at the New England 36. Badgley kicked a 41-yard field goal soon thereafter to make it 20-0, but that only came after he originally missed the first attempt, but an offsides call gave him another shot.

It took until 14:55 remained in the game for the Patriots to finally get on the board when Jones hit Henry from 12 yards out. The Colts then inexplicably gave the Pats new life when Wentz threw an interception to Devin McCourty at the Pats 47-yard line after Jamie Collins tipped it.

Belichick decided to settle for three on a Nick Folk 25-yard field goal with exactly nine minutes left. The defense got the ball back again and Jones brought the offense back out with 3:38 left at his own 18. Seven plays later Jones found Mr. Red Zone (Henry) again for a 7-yard TD, cutting it to 20-17 with 2:16 to play.

Any hopes the Patriots had of pulling this game out ended when Taylor broke off a 67-yard touchdown run, navigating around both Dont’a Hightower and McCourty to find the seam and break free.

“We just didn’t make the play,” McCourty said. “He cut back inside of us, and it was what we call four-minute and everybody down to stop the run so when you got that, guy breaks one tackle, there’s really no depth to the defense kind of selling out on the run and he made a good cut. Me and High (Dont’a Hightower) have to use each other better and make that play.”

The play was a fitting end to the night and now the Patriots have to quickly regroup for a must-win game against what will be a revenge-seeking Buffalo team next Sunday.

Saturday night was a scary site to see in Week 15, a time where the Patriots are usually ascending – like we thought they were throughout November and December – not descending. The loss raises more questions than just the quarterback and with January 1 a week away, that’s not how this usually works.