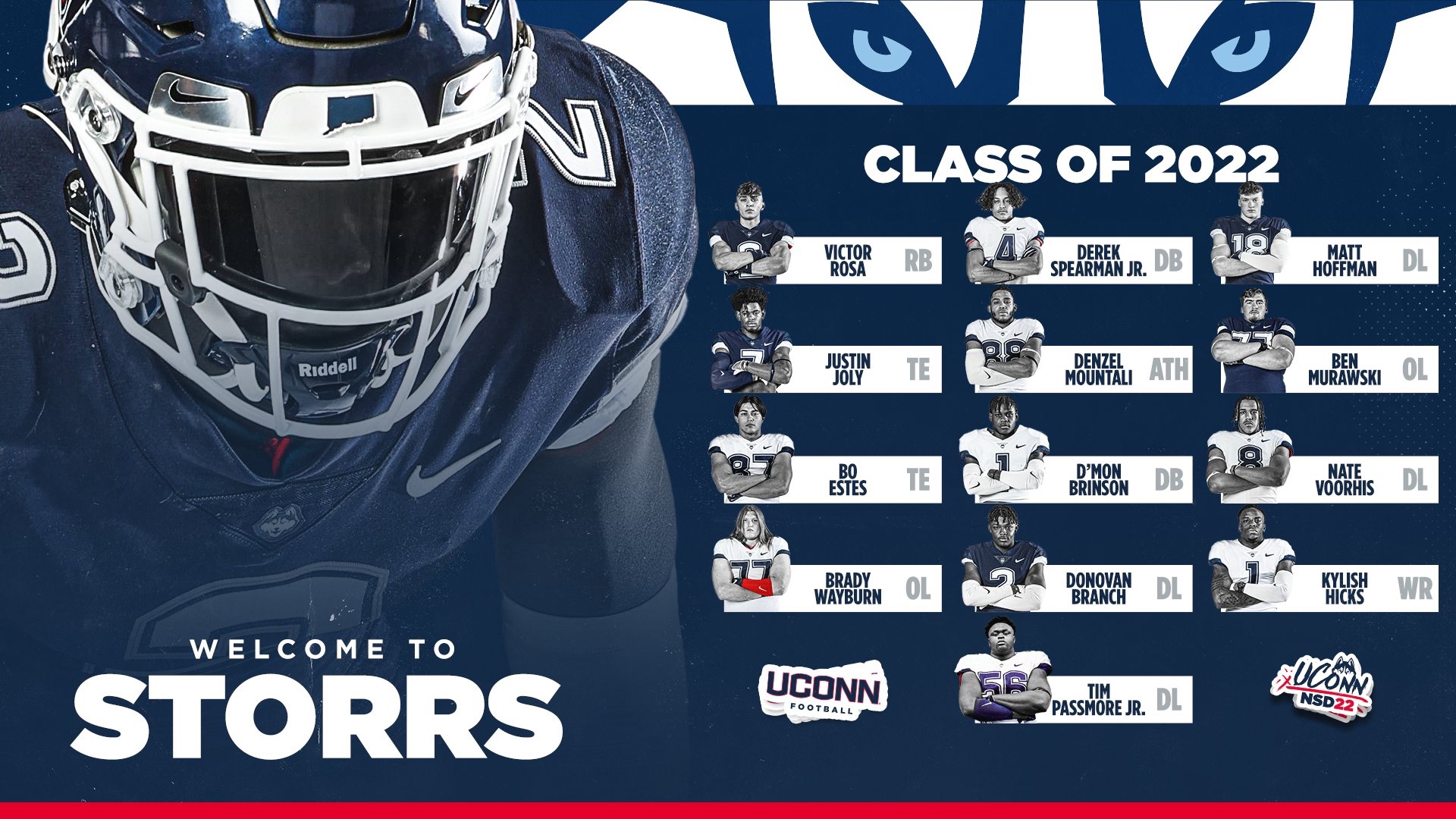 New UConn Head Football Coach Jim Mora was thrilled with the class that he and his staff brought in on Wednesday.

Mora was pretty excited about his time in Storrs thus far and the 12 member recruiting class that was brought in.

“It’s just been amazing,” Mora said. “It’s been awesome. Every single second of it. There’s a tremendous amount of pride in this state for football. That has been very apparent to me in the people I’ve talked to. I want to acknowledge that. I believe it as well. I take pride. This is my state now as well. This is my school now as well. It’s just been inspiring. I can’t wait to get up in the morning and go again.”

The enthusiasm for football is evident and it is also evident in the class that has been assembled. Especially when you consider the fact that Mora was hired on November 11th. He and his staff did not have a lot of time to put this group together.

The class addresses many of the issues UConn had at certain positions and more importantly, there are players in this group who could contribute right away.

Here is a look at the Huskies 2022 Recruiting Class.

Branch was listed as a three-star recruit by 247Sports and is widely considered to be the top prospect in the Huskies class. Branch is ideally suited as a five technique defensive end in a 40 front. He held offers from Army, Central Michigan, Georgia Tech, Iowa State, Navy and Syracuse so getting him was a coup.

D’Mon Brinson, DB, Dillard (Fort Lauderdale, Fla.): Bronson is your quintessential slot corner which can play inside or outside depending on the defense called. He is a good athlete who has the athleticism and the make up speed to stay in phase. Bronson was rated a two-star recruit by 247Sports. He held an offer from South Carolina.

Kylish Hicks, ATH, Mergenthaler Vo-Tech (Baltimore): A playmaker who can make plays in a variety of ways on offense. Plays safety as well and displayed good range and ball skills. Hicks also held offers from Kent State and Old Dominion as well.

Justin Joly, WR, Iona Prep (New Rochelle, N.Y.): At 6-4, 215-pounds, Joly is your classic X receiver. He can play in the slot as well and make impact plays in the red zone.. Joly has a wide catch radius and strong hands. He can win one on one high point situations. Finished the season with 67 catches for 1,033 yards and 10 touchdowns. Expect Joly to get reps early and be a factor as a true freshmen.

Denzel Mountali, TE, Loomis Chaffee (Vancouver, British Columbia): The versatile Mountali can play tight end, defensive end and maybe even linebacker. He profiles more as a move tight end and that is where he can help the team most early on. Mountali had offers from Marshall and Yale as well.

Ben Murawski, OL, St. Thomas More (Harleysville, Pa.): Mora said that he wanted to own the stare so landing the massive Murawski is a sign that UConn will do well at home. At 6-7, 320 pounds, Murawski profiles as a run blocking mauler at right tackle but has the feet to develop into a left tackle.

Timothy Passmore, DT, Cocoa (Cocoa, Fla.): The Huskies have always done well in Florida when it comes to acquiring defensive talent. At 6-3, 290 pounds, Passmore has the size and the length to be a three technique in the Huskies 4-3 defense. Passmore committed to UConn in the spring.

Victor Rosa, dual-threat QB, Bristol Central (Bristol): Rosa can play quarterback or wide receiver and is a dynamic athlete. He’s 5-11, 187 pounds but he plays bigger than his size. Rosa rushed for 2,728 yards and 41 touchdowns in 11 games last season. He was the Connecticut Gatorade Player of the Year. Rosa is listed as a running back but may also play slot receiver. Held offers from Air Force, Army, Boston College, Navy and UMass.

Derek Spearman, DB, Loomis Chaffee (Cornelius, N.C.): Mora’s first recruit and a big time get by the coach. Spearman is a three star safety who can play over the top in coverage but isn’t afraid to run downhill and support the run. He also held offers from Purdue, Miami, Nebraska, and UMass.

Nathan Voorhis, DE, Stroudsburg (Stroudsburg, Pa.): Voorhis reopened his recruitment in October but decided to recommit. At 6-4 230, he has terrific size and athleticism and offers scheme versatility.

Brady Wayburn, OL, Loomis Chaffee (Gastonia, N.C.): Wayburn committed to UConn early and maintained his commitment. He profiles as a tackle at 6-6, 290 pounds but he could also play inside at guard. Landing WY urn is impressive considering he was a three star talent who held offers from Air Force, Charlotte, Columbia and Dartmouth.