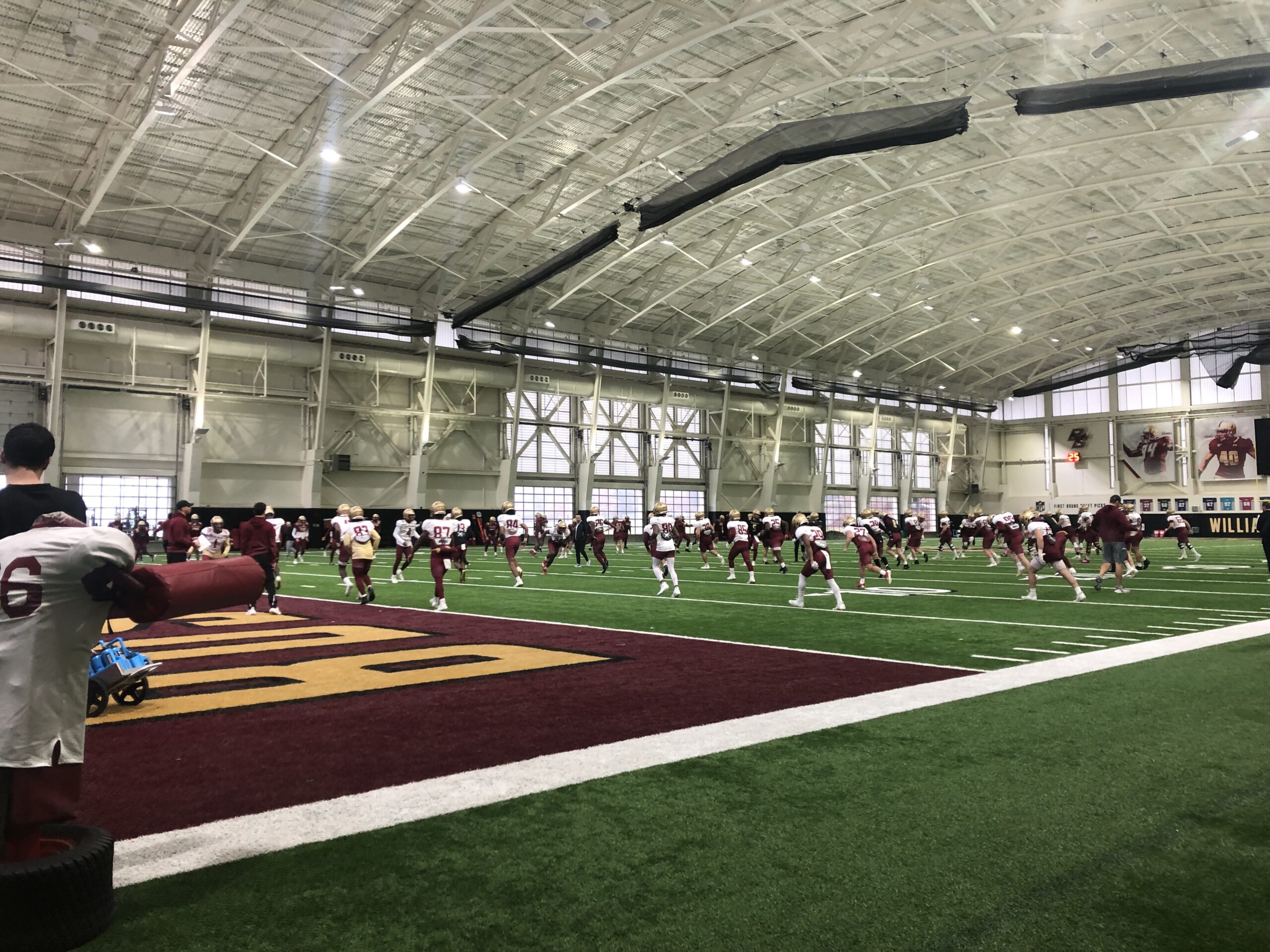 Despite a raw, cold, rainy New England morning on Saturday, there was a buzz around the BC football program you wouldn’t expect to find after a 6-6 season and with a well deserved break on the not-so-distant horizon.

As the players and coaches slowly made their way out of Alumni Stadium and made the short walk into Fish Field House, guys were laughing and looking forward to going to work. Head coach Jeff Hafley and offensive coordinator Frank Cignetti made their way over together. At about 10:32, 50 Cent’s “In Da Club” started blaring as stretching began and drills soon followed.

Since the media last huddled in the Fish Field House and saw coach Hafley in person, he signed an extension, Phil Jurkovec announced he’d be returning next season and the Eagles were invited to the Military Bowl in historic Annapolis, Maryland. All of this while the next classes of future Eagles and potential future Eagles have been visiting with their families. When given the opportunity, coaches have been away from their families putting a full court press on high school kids around the country with Signing Day rapidly approaching.

On Saturday morning, a handful of new Eagles and some family members were on hand.

As recruits intently looked on, some studying drills from their particular position group, there was small window into both the future and present of the program all in one moment. Senior Associate AD for Communications Jason Baum bounced around making sure the media and other folks were all set, while BC Director of on Campus Recruiting Hannah Femia and Director of Player Personnel Joe Sullivan were making the rounds to ensure families were enjoying the first of many BC experiences.

What felt like nearly a dozen interns, student managers, PR team members and others were setting up seemingly endless boxes of food, or finishing displays in the front lobby of Fish Field House. The crisp white Red Bandanna Game jerseys hanging perfectly. New Eagles could stop and look at the shiny gold helmets, the different sock/cleat combinations available to them as well as all the other accessories needed on game day.

This wasn’t just a one day thing either. It was just a glimpse of the process that goes into trying to put a successful product on the field in the ACC.

As coach Hafley and his staff continue to get the team ready for one final game in 2021, there’s also a clear eye on starting the 2022 season right now.

“It’s been busy, we covered so many states and players and families,” said Hafley of the recruiting work that’s been done lately. “This is our first recruiting class we have in person. Everything else was over Zoom, so it’s been really cool to meet the families, see the kids. I give the staff a lot of credit. They worked hard, they were all over the place. We’re bak now. I told the team today it’s just great to be back around them and do football again and know that we’re all going to sleep in our beds for a couple nights in a row.

One of those busy recruiting days for Hafley came two Thursday’s ago. Hafley was in Georgia in the morning, went to Virginia, then made it to Gillette Stadium by 5 P.M. for both the Division 1 and 2 Super Bowls. Being able to see local talent in person in a big game environment only adds to the recruiting process and Hafley was thrilled he had the opportunity to finally see Massachusetts football at its best.

“It’s huge to be able to do live evals,” he said. “Just being able to go to a basketball game right now and see how a kid moves, see what his body looks like. We love the guys we brought in. We’ve got really good freshmen that are here right now and a lot of them we didn’t know what they looked like until they stepped foot on campus. To see the guys we have and really know them and see them play and be able to evaluate guys at a high school game, that’s huge.

“I’m fired up I got a chance to do that and it’s good for us to represent Massachusetts. There’s some really good football and well-coached, those were great games.”

For someone like Jurkovec, the decision to come back was an easy one between the feeling of some unfinished business lingering and Hafley returning, it was a no brainer. There is, however, still a burning desire to finish off this season with a victory over ECU.

“I have to come back, it’s the right decision,” he said. “Everybody’s in the same boat. Coaches, my family, everybody knows I can get better. I’ve developed here so I just want to continue developing and seeing how good I can get over this next year. 6-6 isn’t good enough for us. It’s been like that way too long here, so we’re on a mission to get that better.

“We know coach Hafley, he’s invested, other people are going to come and want to have him, but he’s loyal to BC because he started it here and wants to really grow this and he doesn’t want to go out 6-6 either.”

It didn’t hurt that Hafley’s recruiting has given BC some real potential as well.

“The (recruiting class) they’re (ranked) what, 18th? They’re good,” added Jurkovec. “They’re a really good class, some good guys we got to meet. We’re trying to bring in whoever, whoever wants to come and compete here,”

A guy like Brandon Barlow knows his days are numbered as an Eagle. There’s a different energy during these bowl practices for guys like him with only one game left in the maroon and gold.

“Obviously I’ve been here a while and I’m running out of Saturdays in Chestnut Hill, but I’m taking advantage of each one I’ve got left,” Barlow said. “Just trying to leave the program better than when I came in. We’re all excited to go get one more game, it’d be cool for us seniors to go out and finish with a win, it’s a big emphasis as we get into bowl prep. Just being able to enjoy the team going to the Military Bowl in D.C. Going to see some of the monuments and whatnot, that’s a cool opportunity with the guys and the coaches and to try and go get one more win.”

While the seniors desperately want to win, it’s hard for them not to be excited for what the future of the program currently looks like.

“It’s awesome, that dude is a guy, man, he’s a great coach, he’s a player’s coach and he’s going to push you hard,” Barlow said of Hafley and his extension. “He’s going to be real but he’s also going to be one of those guy’s that’s approachable and a guy you can always go and talk to. That’s something you always want in your head coach, he’s a great leader and he just wants to get after it and go out there and play confidently and fast.

“It’s awesome to see him get that extension and keep building this thing he’s been building up here at BC because it’s growing. If you’re not in, then get In or get out.”

While the present and future of BC football intertwined on Saturday and so many people behind the scenes all made sure it went smoothly, the guy with the spotlight on him at all times reiterated just how much he wants to win at Boston College.

“This is where I want to be,” Hafley said Saturday. “I like living here, I like these kids on the football team. I’m grateful to father Leahy, Pat Kraft, I enjoy working for them and with them. I love our staff, I love our school, I’m grateful for the fans’ support because it was awesome this year. For our home games I thought our crowd was unbelievable. I want to be here and I want to win here.”

Of course, the only thing that will ultimately matter is results, but with the right people in place from the top down and every person associated with the program making sure the Eagles remain a major player in the recruiting game, 2022 and beyond looks pretty promising and we’ve still got 20 days left in 2021.