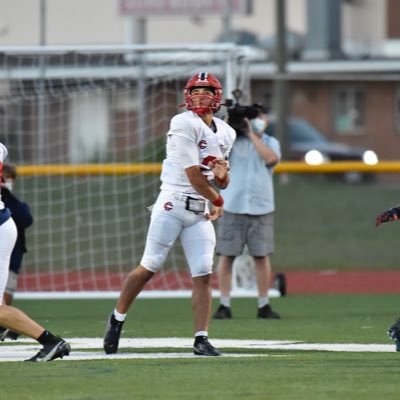 The season may not have ended the way Central Catholic quarterback Ayden Pereira wanted it to end, but being named the state’s Gatorade Player of the Year is a nice consolation prize.

Pereira was named the GPOTY for Massachusetts on Tuesday, fittingly the same day that his future school Maine hired a new head coach. It’s almost as if the universe is telling us there’s a major resurgence coming up in Orono. This is the 37th year Gatorade has named a Player of the Year in each state and for each sport both male and female. Pereira is the first Central Catholic football player to ever win the prestigious award.

“It means a lot to win the Gatorade Player of the Year, especially being the first from Central to do so,” Pereira told NEFJ on Wednesday. “It was something that was a goal of mine, but it wasn’t ever really a main goal as those were more team oriented.”

Just days ago, Pereira and Springfield Central’s Will “Pop” Watson – recently named the MaxPreps Massachusetts Player of the Year – met at Gillette Stadium for the Division 1 Super Bowl. Given the accolades and all the success both guys have had, it was arguably one of the best championship quarterback matchups in the state in the last 10 or 20 years. Did Pereira ever view it as a duel of two of the state’s best?

“To me I didn’t get caught up in the me vs Pop,” he said. “I was more focused on getting a win as a team and doing what I could for that. He is a great player and he will have a great career but that was never something I bought much into.”

The Maine Black Bears finished 6-5 this season after going 6-6 in 2019 and 2-2 in the odd spring season a year ago. New head coach Jordan Stevens is getting a quarterback who threw for 2,823 yards and 34 TD’s. Pereira is also a factor with his legs, adding 790 yards on the ground and 14 touchdowns. The award is a fantastic motivator for the now former CCHS QB to ramp up his workload before heading off to college to face a tough CAA schedule.