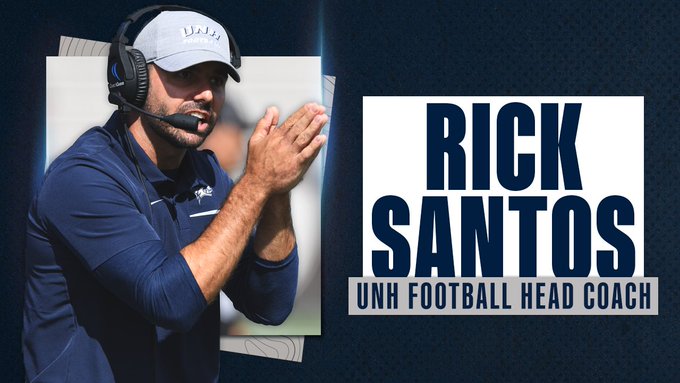 
While folks were just waking up following that late night Patriots win, the University of New Hampshire made a bit of history on Tuesday morning.

In a statement from athletic director Marty Scarano, Rick Santos (08’) was named the 20th head coach of the Wildcats after longtime coach Sean Mc”Donnell announced his retirement last week. Santos has already had the experience when filling in for McDonnell during his six-month absence in 2019 (he went 6-5, 5-3 in the CAA) and if anyone can replace the legendary ball coach while getting guys to play for the name on the front not the back, it’s Santos.

“UNH Football has a long and storied history, much of it built by the efforts of Bill Bowes, followed by Sean McDonnell,” Scarano said. “Our program has had success at the highest level and is nationally respected in large part because of how we do things. Our blue-collar mentality, which emphasizes playing the game the right way, demands a particular leader. Rick Santos embodies all that is UNH Football. Through his highly decorated playing years and his coaching career, including as our interim head coach, he has proven that he will continue the legacy of successful coaches who embrace the UNH way.”

“I am humbled and honored to be named head coach for such a storied program and continue to work at such a prestigious institution,” Santos said in the statement. “We believe great teams are built on toughness, grit, and a family atmosphere. We will work hard to instill these qualities in our young men and cultivate an environment where our leaders thrive. This is truly an honor, and I am beyond excited to lead UNH football into the future.”

Santos compiled a 37-14 record and directed the Wildcats to four NCAA Division I-AA/FCS playoff appearances while playing in Durham. Santos guided UNH to its first-ever postseason victory at Georgia Southern (Nov. 27, 2004), and was a member of the 2005 Atlantic 10 championship team that ranked No. 1 in the country at one point, and won two A-10 Northern Division titles (2004, 2006).

Rick won the Walter Payton Award as the best player in FCS football in 2006 with 3,125 yards and 29 touchdowns. He’s also got three Atlantic-10/CAA Offensive Player of the Year (2005-07) awards and four-time All-Conference First Team QB titles to his name. Santos still holds school career records in pass attempts (1,498), completions (1,024) and passing yards (12,189). and two and four of the top six single-season records in completions, headlined by 301 in 2005. His ’05 season included a school all-time high 3,797 passing yards.

The Wildcats are extremely lucky to have a guy that can literally walk into any locker room in the country, put his playing resumé on the table and say “any questions?” Players can immediately look to his numbers during his time on the field and know their head coach has seen and accomplished just about everything there is to accomplish at the FCS level. Not to mention, Santos signed as an undrafted free agent with the Kansas City Chiefs in 2008 before heading up north to play in the Canadian Football League from 2009-12.

“I’m so happy for Rick, he’s like a big brother to me,” junior wide receiver Brian Espanet said in a text on Tuesday when asked how excited guys in the program were with the news. “We’ve been connected for a long time growing up so close to each other. As close as we are, he’s the head coach and I respect him so much. This program is going to get a shot of new life and once I return in the fall I can’t wait to be a part of it. Rick knows he could land a huge job somewhere else calling an offense or doing whatever, but that’s what makes this place so special is the loyalty.

“He wanted to come home and we couldn’t be happier to have him.”

It also doesn’t hurt that Santos has McDonnell’s full blessing in what could have been perceived as a bit of an awkward situation.

“Ricky brings a great amount of energy, leadership and the same winning attitude he had as a player to the way he coaches,” McDonnell said in the statement released Tuesday. “He has that new voice and fresh ideas that will help us recapture the success UNH Football deserves. He may not be New Hampshire born, but he is New Hampshire bred, and I’m excited to see where he leads this football program.”

While the excitement around Santos’ hire is evident, it will certainly be a bit strange for some guys not hearing coach Mac’s voice during the week (possibly in their sleep) or on the sideline on Saturday afternoons.

“It’s bittersweet, I’m sad to see coach Mac go,” Espanet added. “I’m excited for the Santos era, but Mac and I always had a great relationship. He knew how to push my buttons because he knew it would make me play better. I’ve never had more of a love-hate relationship with anyone in my life. He always told me I needed to be faster and stronger, so every time I stepped on the field I thought “I’ll show you” and he knew it. I would mess up a block, route or the very rare dropped pass he would kindly say “do that again and I’ll ship you in a box back to Hopedale.”

“But, we’re very close and in a way, he was my dream coach.”

Santos is the ideal guy to continue the winning tradition coach McDonnell established over the years and the Wildcats’ ascension back to the top of the CAA may not take as long as people think because of this hire.

“The foundation of any great program or organization is the people,” Santos added. “When you look at what makes our team and this University special, it’s everyone involved. From the administration, coaches, players, training staff, strength staff, equipment staff, faculty and the entire Durham community. Everyone shares the same vision in making sure we develop our student-athletes and help them reach their full potential.”