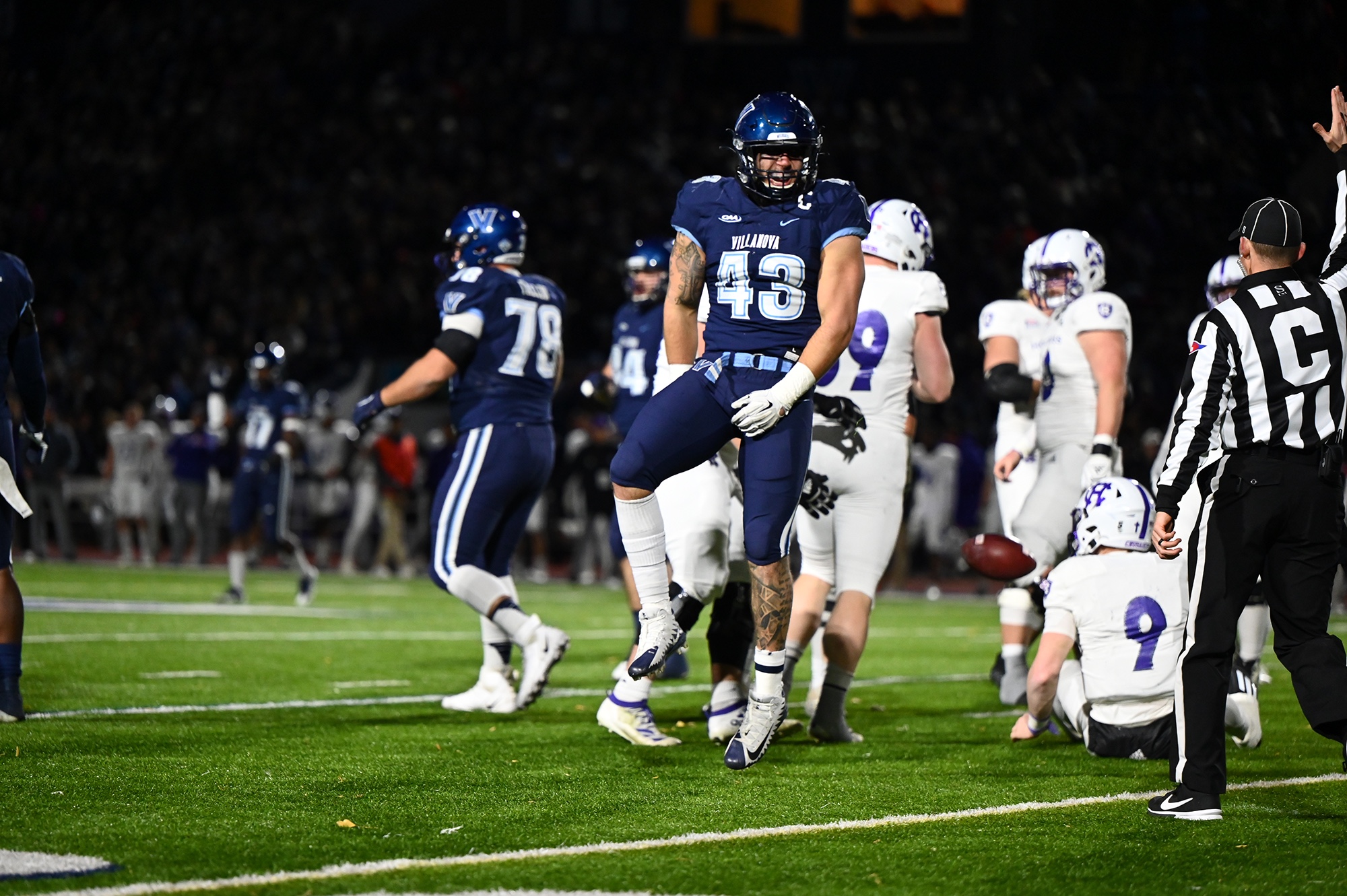 The Holy Cross Crusaders went into Friday night’s second round match up with Villanova as a two touchdown underdog. The Crusaders proved however they weren’t your typical underdog losing 21-16 to the number two seed Wildcats.

Bob Chesney talked about his team’s resolve despite losing one of their best players.

“They don’t quit. They won’t quit. For the seniors, that’s going to serve them well in life as well. They won’t play games on Saturday or a Friday night. They’ll have their opportunities to win a different game, off the field.”

Villanova struck first on a two yard touchdown run by Justin Covington. It appeared that the Wildcats might take control of the game early but the Crusaders defense settled in.

Holy Cross lost star linebacker Jacob Dobbs in the second quarter. He did not return but the defense adjusted and played well which is a testament to the depth that Chesney has built up in the program.

Despite the defense playing well in the first half, Villanova was able to hit pay dirt once again right before the end of the half when Covington scored his second touchdown of the game.

Trailing 14-0 heading into the third quarter, the Crusaders needed a drive and a break to find their way back into the game. They got both.

The Crusaders opened the quarter on a 12 play, 68 yard drive which culminated in a touchdown pass from running back Peter Oliver to tight end Sean Morris for seven yards. The Crusaders executed the Tum Tebowesque jump pass to perfection.

With the score 14-7, the Crusaders we’re going to need some luck and they got it on the ensuing kickoff when Villanova fumbled at the 26. The ball was recovered by Terrance Spence and it set up the Crusaders deep in Wildcats territory. The Crusaders however could not cash in on the turnover and settled for a 22 yard field goal by Derek Ng.

Unfortunately, you can only keep Villanova’s high powered offense in check for so long. The Wildcats got a big return and it took them only four plays to find the end zone when running back Jalen Jackson scored from 14 yards out. The extra point made it 21-10.

Holy Cross however would not go away. The Crusaders put together a 13 play, 54 yard drive that culminated in a 3 yard touchdown run by quarterback Matthew Sluka. The Crusaders however failed to convert the two point conversion.

After one last gasp drive by the Crusaders fell short, the Wildcats were able to run the clock out and hold on for the win.

After the game, Sluka and defensive lineman Benton Whitley talked about what this game meant to the Holy Cross program and falling just short.

“This is uncharted territory,” said Whitley. “No Holy Cross team has been here. We came in and let it rip. It was awesome.”

Sluka added. “To be able to do that last week was great just for the belief of the guys. You think you can do it again, but it’s not going to go your way every time. We learned that today.”

Despite the loss, it was a historic season for the Crusaders. Holy Cross took the next step. It did not end the way anyone wanted but the Crusaders acquitted themselves well against a quality opponent.

“Villanova is a phenomenal football team, a very complete football team,” Chesney said. “Our guys played hard, which we knew they would for sixty minutes. To get the ball back with three minutes on the clock, you feel like you’re going to make something happen, and we didn’t.”