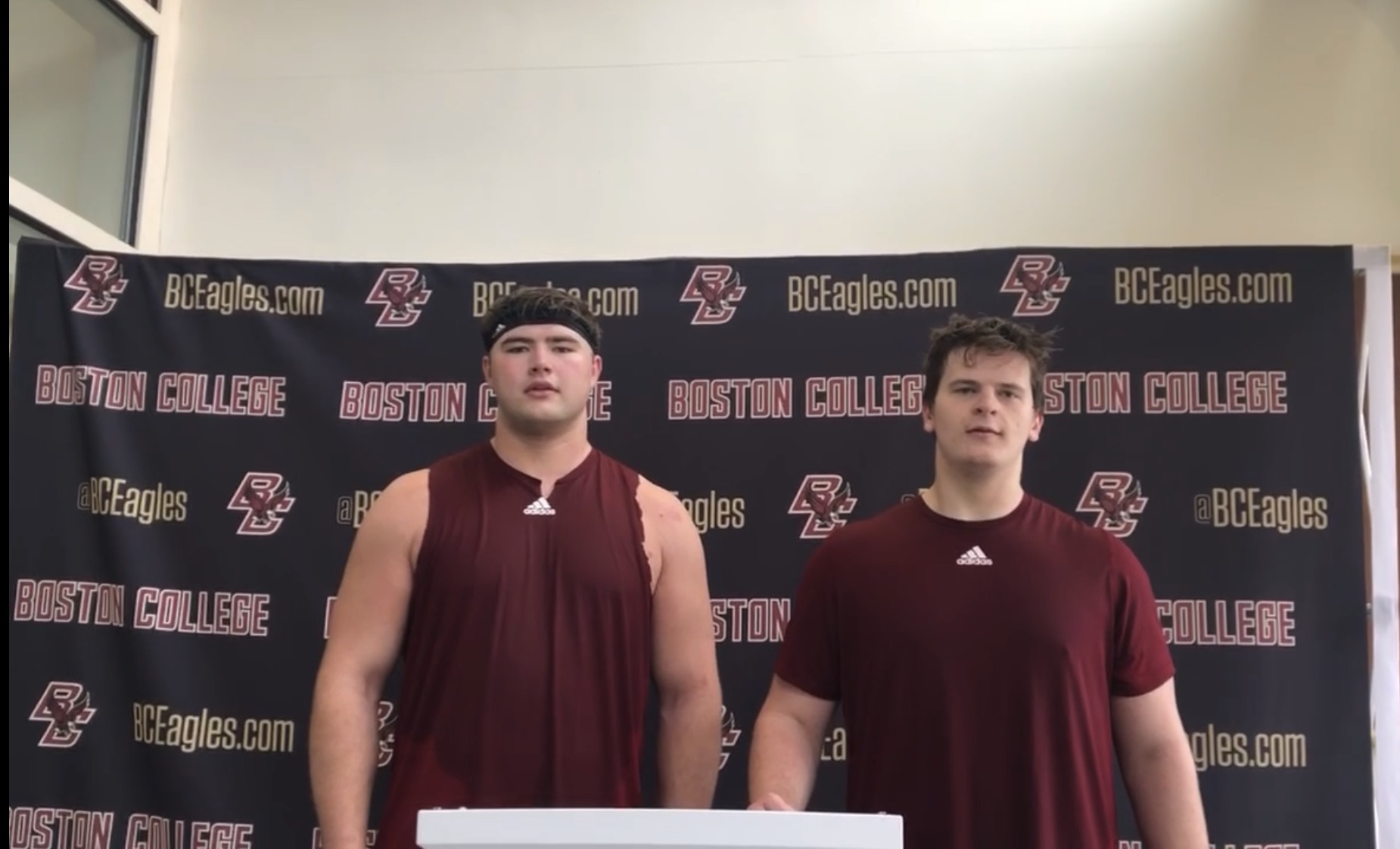 A year ago, Drew Kendall and Ozzy Trapilo were in quite a different position than they are now.

Kendall was about a month away from officially becoming an Eagle with a mid-year enrollment in January and he was working out at Noble & Greenough ahead of lacrosse season a few months away. Meanwhile, Trapilo was wearing the maroon and gold already, but he was getting ready for basketball season as a senior at BC High just days after football season ended.

Now, two of the best offensive line prospects to come out of Massachusetts in a long time were going through their first ever bowl game practice session on Saturday as the Eagles await the announcement of who they’ll be playing and where they’ll be traveling on Sunday.

“The days are a lot longer it feels like,” Kendall said when asked if waiting for a bowl game has felt like forever. “Today was great, getting a practice in was awesome. I’m excited for next week, excited to see who we’re going to play.”

“I agree, a lot more free time with the days with just the workouts and not practice,” added Trapilo. “It was good to get back out there today and get back to it.”

It’s not easy being a Division 1 college athlete obviously, there’s a ton of work that people don’t see that goes into the every day process. Both guys reflected on just how different their routines are now compared to a year ago at this time.

“I was playing basketball in high school, so it was a lot different,” said Trapilo. “We’d go straight from football season, hopefully get a week off, get healthy again, recover and then straight into basketball tryouts. It’s been a lot different. We’ve been doing our best to recover for the bowl game and hopefully be in the best shape we can for it.”

“After football it was right into workouts and then getting ready for lacrosse season,” added Kendall.

The high school Super Bowls took place at Gillette Stadium this past week. Trapilo knows all too well about the commitment and desire it takes to chase an appearance in that final game at Gillette. Kendall didn’t have that same opportunity, but chasing a shot at an ISL bowl game meant just as much.

“A little different, but same mentality, just trying to make it that point,” Kendall said of his mindset around this time last year. “Not every team gets to make it (to a bowl game or Gillette) it’s a hard fought season, so it means a lot to get to Gillette but for me making it to a bowl game, that was my Gillette.”

“For me I was in the Catholic Conference obviously so we had a chance to make it and that was the main goal for everyone,” added Trapilo. “That really drove the whole team. My sophomore year we had a really good shot at it, it didn’t end the way we wanted, same with the following two years. But, the main goal at the end of the season is to get to Gillette and play for that ring at the end of the year.”

The constant chatter surrounding the Catholic Conference and whether they should even be dealing with public schools on the schedule is nothing new in this area and reared its ugly head again this week. Trapilo talked about whether he thought there was a level playing field when he was playing against public schools.

Kendall only played against other ISL schools, but he also weighed in on the catholic school vs. public schools debate from his perspective as well.

“I think (it’s a level playing field), there’s teams that have really good teams and really good players at different times, but it comes and goes,” he said. “Like for us, BB&N and Milton Academy you’d see at the top and then in a couple years you might see St. George’s, whatever, it’s a cycle so it’s different every year.”

Both guys were right in the middle of trying to make their senior years special about 11 months ago, now they’re watching fellow linemen kick field goals to end a December practice and getting ready to represent Boston College in the first bowl of the Jeff Hafley era.

Time flies when you’re having fun.