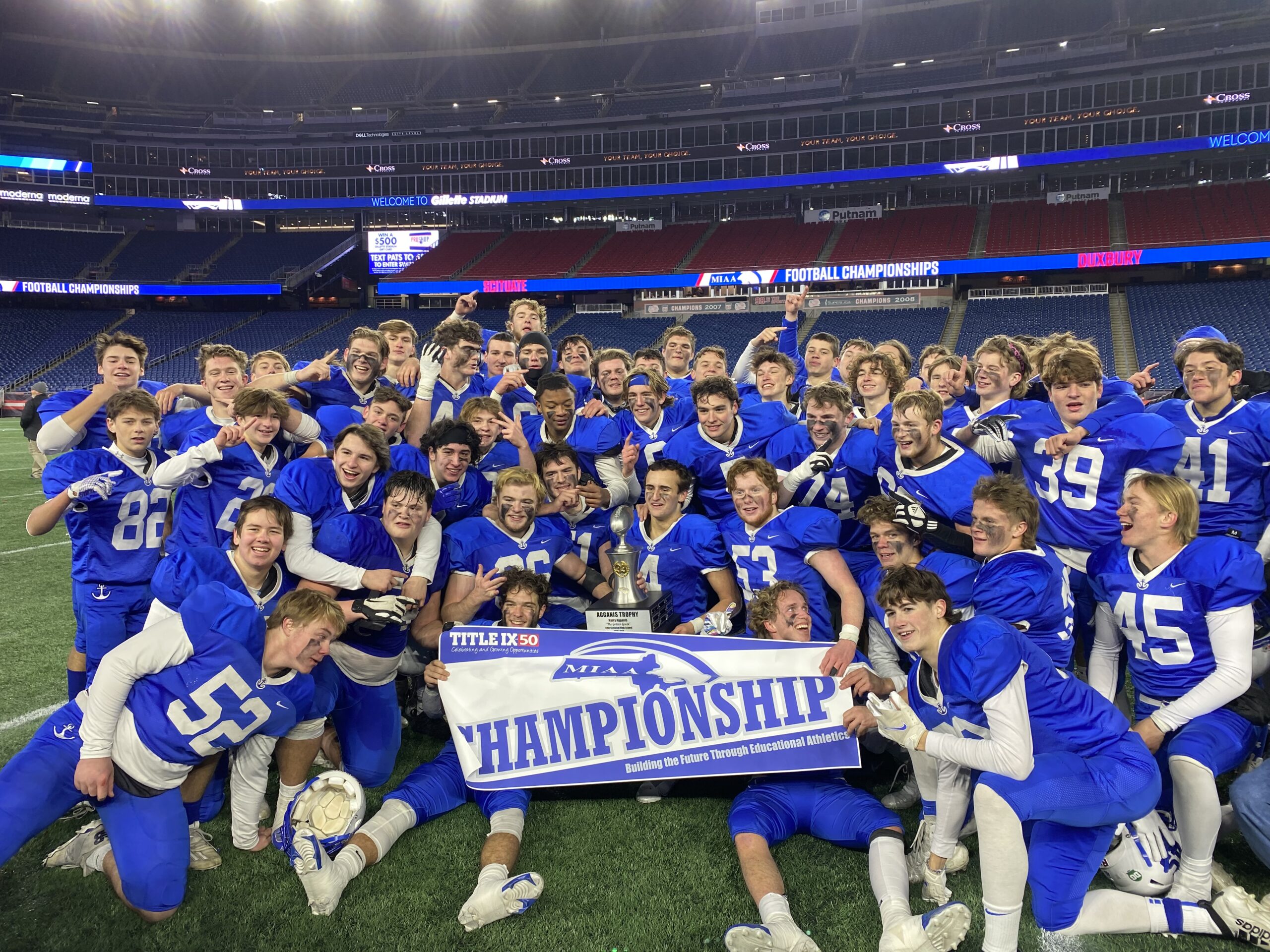 FOXBOROUGH – Scituate had to travel 75 yards in less than two minutes in order to tie the game against rival Duxbury in the Division 4 Super Bowl at Gillette Stadium on Friday night.

The Sailors did that, getting a 10-yard touchdown run from Andrew Bossey with 27 seconds left, but what came next is the stuff legends are made of.

Trailing by one, Scituate head coach Herb Devine decided to go for two and put the ball in the hands of his best player. Keegan Sullivan. Sullivan rumbled in and gave the Sailors a stunning 14-13 lead.

Two plays later, the boys in blue and white stormed the field after stunning their rival and capturing the program’s second title in four years after winning a championship back in 2018, ending a storybook season at 11-2. Not only that, but they handed the Dragons their first loss to a Patriot League team in 13 years.

“Coach was confident, we were all confident, ran it off tackle and I got in,” said Sullivan of the two-point play call.

“It wasn’t easy, it was a bumpy road the whole game, both defenses played outstanding,” said Devine. “At the end there, we were just able to get a little drive going, they kind of backed way off and we just chipped away and chipped away and then had to make a play. Henry our quarterback made a couple great plays, guys were making plays all over the field.

“In the end Bossey punches it in, we go for two to go for the win…we went for two last time (against Duxbury in the regular season) and kind of fumbled the snap. For us to execute, I told the kids ‘this is the play we’re going to call if we go for two’ and they executed it perfectly. I give them all the credit.”

Duxbury took a 13-6 lead with 2:03 remaining in the game when Dennen Sullivan booted a 25-yard field goal. Scituate began the eventual game-winning drive at its own 25 with 1:58 remaining. Quarterback Henry Gates made some extremely athletic moves to extend plays and find receivers – particularly James Cannon who had 115 yards receiving – to move the ball downfield, eventually setting up the 10-yard rumble from Bossey.

After calling a timeout, the Sailors came back out in a straight T formation and handed it to Sullivan for the game-winning two-point run that will now live in Scituate football lore forever.

“Before this week, I definitely was expecting we’d win this game, I didn’t think it would come down to the last minute and two point conversion,” said Sullivan. “It’s icing on the cake and I’m just super proud of the team.”

After forcing a three-and-out on the game’s first possession, Duxbury wasted little time getting on the board. Matt Festa led a quick five-play, 49-yard drive that ended with a 21-yard touchdown pass to Chris Walsh and Dennen Sullivan’s PAT made it 7-0.

The Sailors had to punt again after just three plays and the Dragons’ next scoring drive began at the Duxbury 35. This one took a bit longer – 14 plays to be exact – and ended with a 33-yard field goal from Sullivan to give Duxbury a 10-0 lead after one.

Scituate finally strung some plays together and got on the board on its next drive. Thanks in large part to a 60-yard catch on the drive from James Cannon, the Sailors eventually cut it to 10-6 when Keegan Sullivan punched in a 1-yard touchdown from a yard out, but the PAT was blocked by Finnian Carley.

The Sailors and Dragons both missed a golden opportunities to steal momentum on their next possessions.

Scituate took over at the Dragons’ 41 following a three-and-out and a stuffed direct snap attempt on the punt. Scituate marched down inside the one, and it appeared as if Sullivan had a touchdown catch just inside the goal line on a short throw from Henry Gates on 4th-&-goal, but the referee ruled Sullivan was actually down at the one, forcing a turnover on downs with 9:02 left in the half.

Festa methodically led the Dragons on a 99-yard march spanning 15 plays over the next several minutes and Duxbury was set up at the Scituate 1-yard line in the final 30 seconds of the half. The Dragons eventually had an illegal shift and were pushed back to the six, leading to a missed field goal and keeping the game at just a four-point margin as the teams headed to the locker rooms.

The third quarter was a defensive struggle of epic proportions as the teams combined for six punts and a turnover on downs with Duxbury maintaining its 10-6 lead heading to the fourth.

Three plays into the final frame of the 2021 high school season Sullivan picked off a Festa pass. The Sailors couldn’t do anything with it, but Duxbury muffed the punt and Scituate’s Will Chatterton recovered at the Dragons’ 28. The Sailors eventually turned it over on downs at the Duxbury 21 but the Dragons were forced to punt. Just one play later, Brendan Bonner picked Gates at the Duxbury 42, setting up the drive that led to the field goal from Sullivan that made it a seven-point game and set up the incredible finish.

For the Sailors, winning may not be a new feeling, but Friday night’s finish is a night no one inside Gillette Stadium will ever forget.