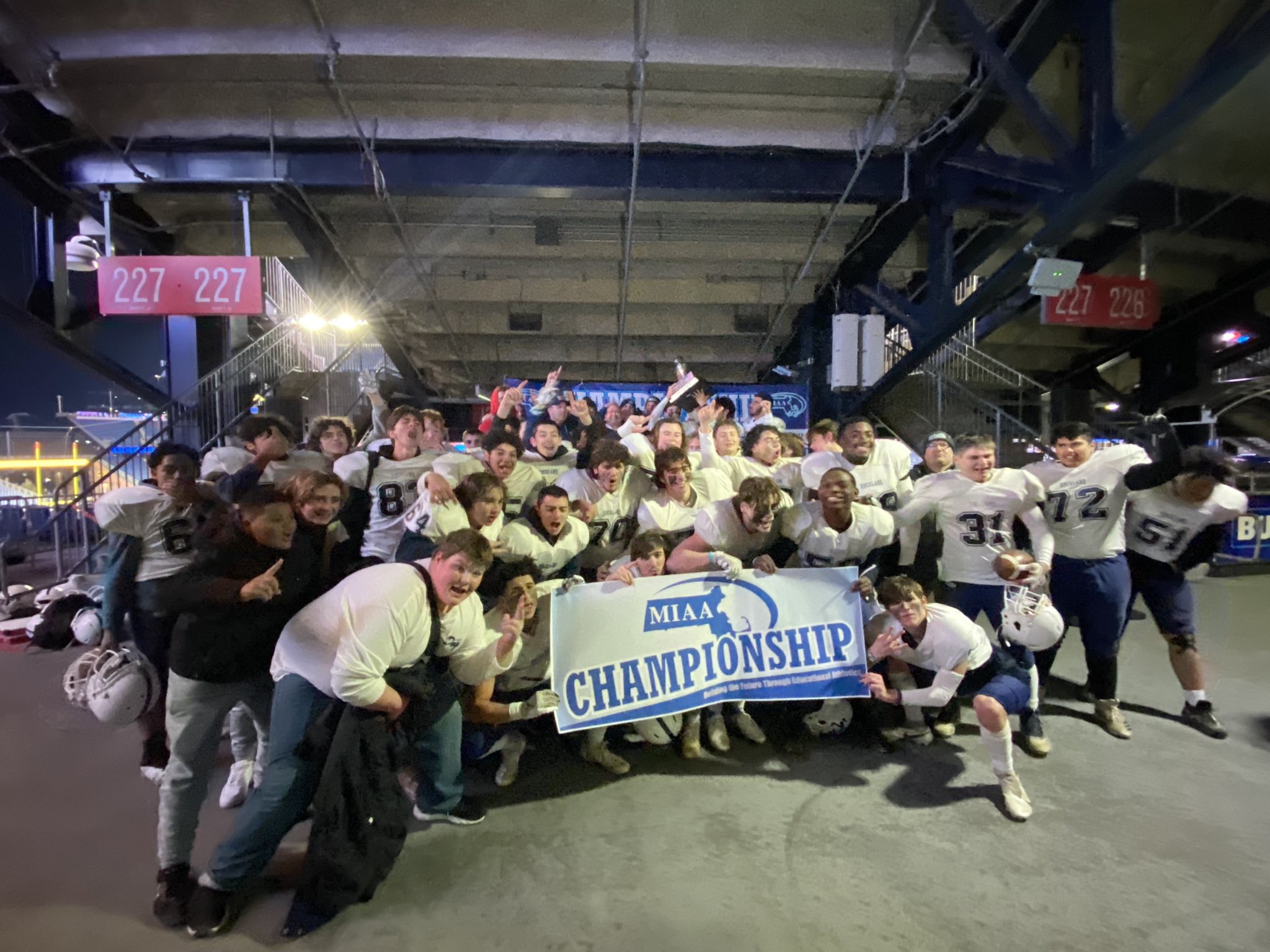 FOXBORO — The DIv. 6 state title game between Rockland and Abington played out in a manner expected of the neighboring, South Shore League rivals. The hits were hard, and it felt like you were watching two brothers settle their differences in the backyard.

Yet every time Abington seemed to make a move, Rockland answered two-fold to wrest away momentum and hold on to the lead. The result was a 23-13 Rockland win, and the program’s first Super Bowl title since 2000, when the Bobby Murphy-led Bulldogs beat Bishop Feehan. Rockland also won the regular season meeting with Abington, 17-7.

Rockland (10-2) forced five turnovers, and even though the Bulldogs did not score a point in the second half, they stopped Abington enough to keep the double-digit lead intact.

“It’s tremendous. It’s unreal,” Rockland coach Nick Liquori said of playing an archrival in the state title game and not a South final. “We were talking about it. It’s something we wanted to build on for quite some time. I’ve been here for five years, but I’ve been an assistant here since ’05. We’ve always come close to that Eastern Mass. final. We never really got there. But having the first state tournament and be able to do it against a team like Abington is phenomenal.”

“We’re great friends with a lot of them (in Abington) over there,” Rockland junior Lucas Leander said. “It’s a hard-fought game. They’re always tough. This was just a great game. A great game.”

Rockland got on the board right away, as the Bulldogs took the opening kickoff and drove 62 yards for a touchdown. Quarterback PJ Celestino hit Leander for an 8-yard score on third and goal, as Leander did a nice job keeping his feet inbounds.

At the end of the first quarter, Rockland started a 13-play drive that lasted until 9:13 of the second quarter. Celestino finished it with a leap into the end zone from a yard out on fourth and goal. As the Bulldogs built their lead to 13-0, they were in complete control, as Abington had yet to record a first down.

But Abington rallied, and Isaiah Ricketson had a 7-yard touchdown that was set up in part by a Eddie Reilly 37-yard completion to Tommy Fanara.

Yet again, though, Rockland answered. Celestin took the ensuing kickoff 99 yards for a back-breaking touchdown.

“If it had one more revolution I’m pretty sure he would have let it go in the end zone,” Liquori said. “I didn’t know what to think at first until he got to about the 25-yard line. I think he had a good chance. I think he was going to run out of steam, but he did a great job with his field vision. He cut back and avoided some tacklers to get in the end zone. It was awesome.”

Jacob Coulstring then had an interception on the next Abington possession, and Rockland put together a nice, two-minute offense to get into field goal range. Jerry Esposito then kicked a 27-yard field goal, and that was it for Rockland scoring with a 23-7 halftime lead.

Abington popped in the lone touchdown of the second half when Mason Kilmain ran in a 3-yard touchdown with 2:23 left in the third quarter.

But the rest of the story was Rockland’s defense. Gabe Pinheiro recovered two fumbles for Rockland, and Leander had maybe the biggest one, as he forced the ball loose and recovered it with 3:40 to play.

“Gaven Wardwell wrapped him up,” Leander said of the play. “I put my helmet on the ball. It popped out. Luckily, I jumped on the ball, and we got the ball back.”

Drew Donovan had a strong game for Abington, as he had 41 yards rushing, 34 yards receiving, and some nice returns on special teams.