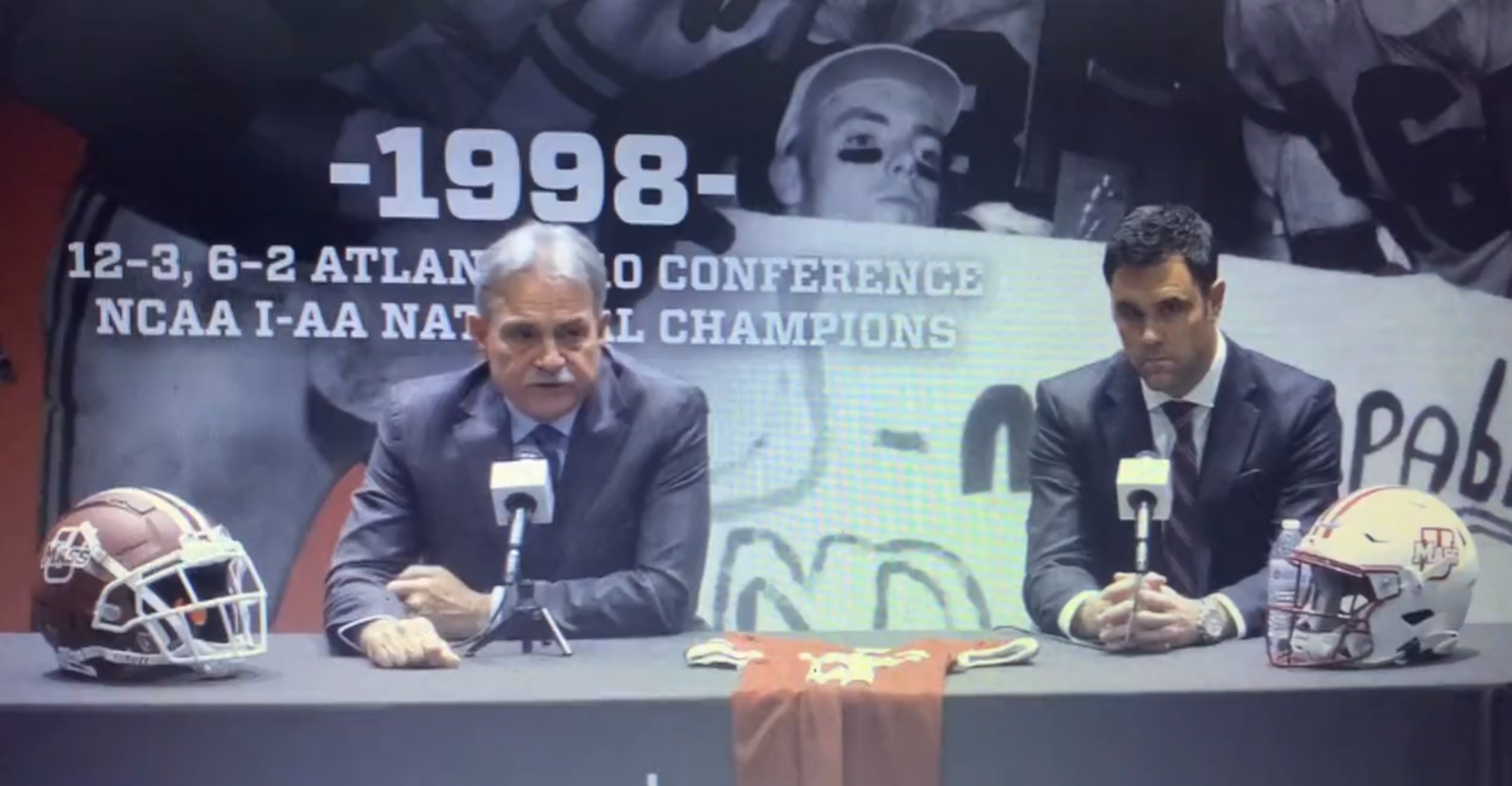 Since the dismissal of former UMass Head Coach Walt Bell there has been one name and one name only that has circulated around the fanbase: Don Brown. After he made an appearance in the skybox during the Minutemen’s home loss to Toledo this season while his former employer, Arizona, was on a bye week, rumors have been swirling about whether or not Brown would end up back in the maroon and white.

On a chilly afternoon in Amherst the rumors and chatter had officially come to a close as Don Brown was introduced as the 13th head coach in UMass Football history. From the very beginning of the press conference spirits were incredibly high over the return of the school’s former defensive coordinator (’98 – ’99) and head coach (04’ – ‘08’).

It’s not often a hiring is celebrated by an entire fanbase, but from the chatter on message boards to social media one thing has been consistent, folks are incredibly happy to welcome him home to the Pioneer Valley.

UMass Athletic Director Ryan Bamford opened the press conference and spoke highly of Brown and his accomplishments during his time at the school and his more recent stops like Boston College, Michigan, and Arizona as a defensive coordinator.

Bamford had praise for a number of folks across the athletic department, football staff, current student athletes, notable alumni, and donors who’ve supported the program in these difficult times. A noteworthy praise, outside of the usuals like Chancellor Kumble Subbaswamy who Bamford has always shown admiration for, was University of Massachusetts President Marty Meehan.

“President Meehan is a huge football fan, he was very excited about this hiring and was very engaged throughout this process,” noted Bamford. It’s been a long criticism of fans that Meehan was not outwardly committed to the program like other school presidents have shown, making this an interesting nod that perhaps was part of the convincing for Brown they were all in.

When it was time for Coach Brown to get to the mic his opening statement lasted just about four minutes. He was direct, to the point, but most importantly, stressed how excited he was to be back.

“Sometimes you’ve got to go away, a long way from home, to realize where you belong. This particular opportunity, it was just the right time,” said Brown. “I’m just fortunate that I was in the right place, and the challenges that are in front of us I’m just excited about.”

“The one thing that I feel strongly about is my passion for the University of Massachusetts and it’s players,” stressed Brown.

He said that upon first arriving back in Massachusetts with his wife one of the first things he did was hit the state recruiting, noting how many of the coaches he met with were incredibly excited to have him back in the state.

While Massachusetts doesn’t have the depth of a state like Florida, there is talent spread throughout the region, which Brown highlighted. “If you ask high school coaches in this great state and throughout New England who their most common visitor is?” Brown proudly raised his hand. “I’ve made New England recruiting wherever I’ve been a priority.”

Brown touched upon a number of other things such as limiting pre-snap penalties, playing with pace on both sides of the ball, his relationship with interim head coach Alex Miller (who has since been retained on his staff), and how no one was going to stop him from making the decision to come here.

Some things stood out more than others, such as his expectations for the Minutemen right out the gate come next season.

“We want to win the first game, that’s going to going to be our focus, with each week as it’s own separate unit,’’ said Brown. “Getting our guys in tremendous physical condition will be a huge task of our strength staff.”

Another important item Brown spoke about was in regard to the transfer portal, college football’s still semi-fresh gateway that has allowed players to be able to transfer much easier than before.

“The transfer portal is an opportunity to get a mature player that (a) knows how to practice, (b) knows how to take care of his academics, (c) is a guy that is more mature physically and has been through a college system,” Brown noted.

“You don’t want your whole team to be that way, but it’s nice when you have a couple of depth chart issues that you can plug in an experienced guy that can go ahead and provide leadership for the position group,” said Brown. Later on, he highlighted the linebacking group as an example where this would be helpful, as this is a position that has been trouble for the Minutemen since the later Whipple days.

Brown pleaded how important it is to get students to games to support the program and how much that’d help the team. One thing that could be good for that? Going to a bowl, which he closed out the conference with.

“Wouldn’t it be nice to be playing in a bowl game,” Brown remarked. “If we can get ourselves into a bowl game and bring our first bowl trophy home at this level it would be a very special thing.”

This isn’t the first time a prospective UMass coach has talked about going bowling. However, if there was ever a man to do, certainly Dr. Blitz is name that you’d imagine can finally make it happen for the Minutemen.

If you want to catch the whole conference you can visit this link below.