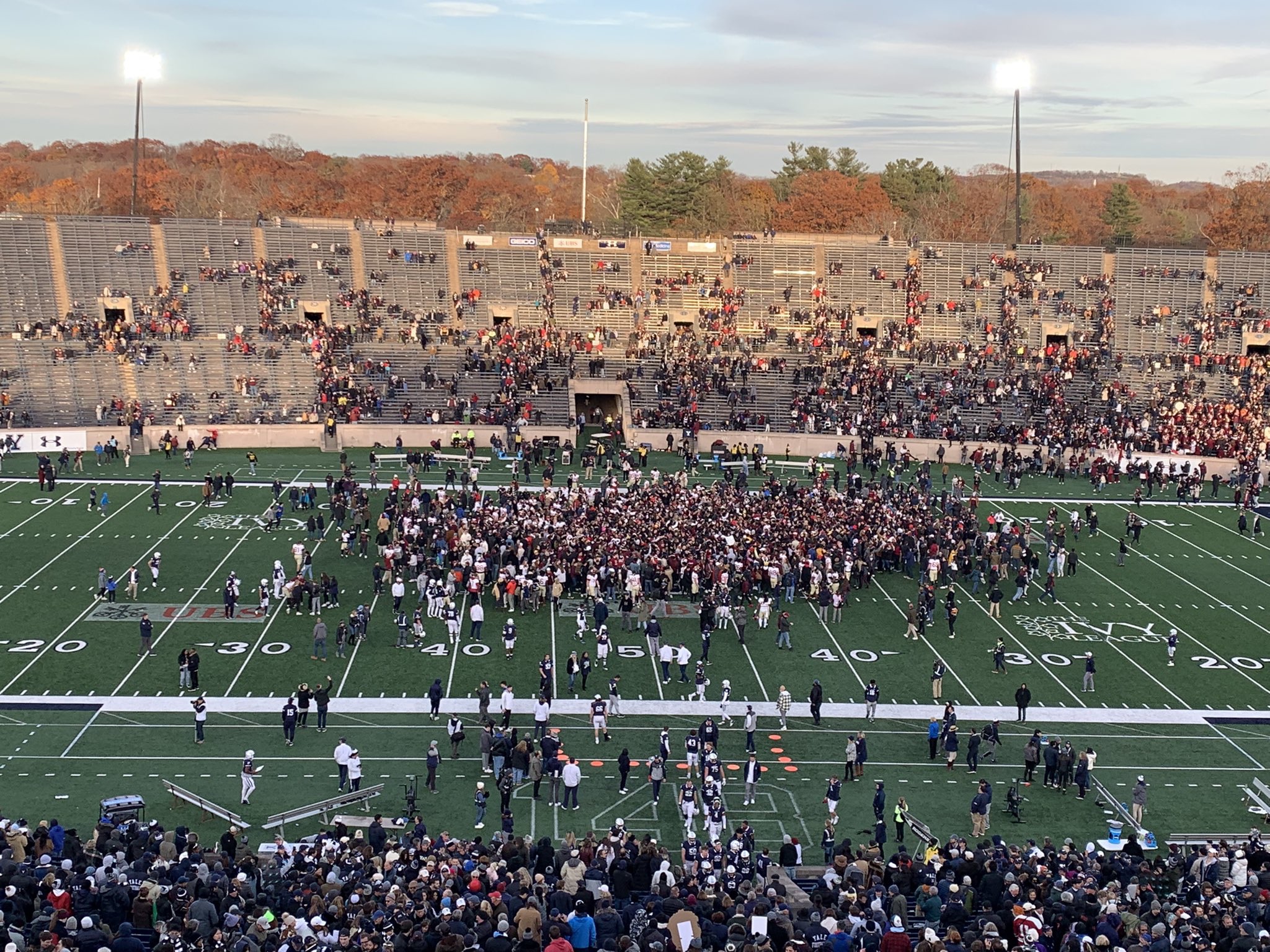 There’s a reason why “The Game” is a featured broadcast on ESPN every season. Aside from the historic significance that follows this storied matchup, the football itself is the anchor that makes this game so fun.

In the dying embers of the fourth quarter on Saturday afternoon it was Harvard (8-2) who’d add another incredible line to the story with a come-from-behind 34-31 win over Yale (5-5).

Harvard Head Coach Tim Murphy spoke after the game about how proud he was of the junior wideout from Louisiana. “He’s the nicest, most hard-working kid, we didn’t think he was going to even play today. To come down the stretch and make those plays is something he’ll never forget.”

The 137th meeting between the schools certainly disappoint as the two traded scores all game long and featured five different lead changes.

While Harvard is known for their run game the Yale defense did a great job against their two feature backs. Junior Aaron Shampklin (13 CAR, 67 YDS) and sophomore Aidan Borguet (9 CAR, 43 YDS, 1 TD) couldn’t get outside the hashes to break off any big runs, being forced to stay inside and face a tough Bulldog interior.

While Luke Emge didn’t have many flashy plays on the day, his calm demeanor in the pocket was huge for Harvard’s confidence. “Luke took a couple big shots towards the end,” said Head Coach Tim Murphy. “I wasn’t sure who was going to be sent out there, but it showed (the team) great profile and courage.”

For Yale, sophomore quarterback Nolan Brooms (17/37, 262 YDS, 3 TD, 3 INT) gave the Crimson defense fits all game long. His ability to pick up yards on the ground (17 CAR, 51 YDS) made it difficult to contain him in the pocket.

Harvard senior captain Jordan Hill (10 total tackles) noted how difficult it was to track Brooms. “It was really just 12 (Brooms), he played his ass off” said Hill. “He extended plays, just making them all around the field, he really put us to the test when he was running the ball.”

The first scoring drive of the game came from the Bulldogs who capped off a 10 play, 94-yard drive with a 17-yard touchdown pass from Grooms to senior Darrion Carrington (3 REC, 42 YDS, 1 TD) to give Yale a 7-0 lead.

Craziness would ensue on the next few drives of the game. With Harvard driving into Bulldog territory after the Yale score Luke Emge turned it over with a fumble on a failed play action.

With the ball back in Yale’s hands, Grooms first pass from scrimmage would be intercepted by senior linebacker Jack McGowan to set the Crimson up back in Bulldog territory. A Jonah Lipel (2/2) 47-yard field goal would give Harvard their first points of the day to make it 7-3.

On Yale’s next possession the pick-party would continue for Grooms as Harvard’s James Herring interception would help put the Crimson once again in Bulldog territory, setting up Aidan Borguet for a one-yard score to go up 10-7.

The two teams would trade field goals to make it 13-10 until midway through the second quarter when a huge Harvard punt block would be returned for a touchdown by sophomore Kobe Joseph to give the Crimson a 20-10 lead.

A 30-yard strike from Nolan Grooms to senior tight end JJ Howland (4 REC, 68 YDS, 1 TD) would inch the Bulldogs within three just before halftime to make it 20-17.

Harvard would continue their first half momentum with a freshman wide receiver Ledger Hatch (2 REC, 38 YDS, 1 TD) 11-yard touchdown catch midway through the third quarter to make it 27-17.

However, it’d be all Yale until what felt like the end of the game, scoring 14 unanswered points to snatch the lead back and go ahead 31-27.

While the Crimson have had a stout run defense all season long, you wouldn’t have thought so today, particularly in the second half where Bulldog junior running back Spencer Alston (19 CAR, 74 YDS, 1 TD) would gash through the Harvard defense and play the role of clock-killer.

With 2:40 to go in the fourth quarter down 31-27 the Crimson would turn the ball over on downs in their own territory after being unable to move the ball.

With 2:01 to go the Harvard defense would play four of the biggest downs of their lives. After three straight stops and two time outs taken, the Bulldogs would attempt to go for it and ice the game, but a Nolan Grooms incomplete pass would result in a turnover on downs.

Emge’s late game heroic drive would only use 37 seconds setting up the go-ahead touchdown to Wimberly to take the final 31-27 lead.

With 22 seconds and the ball Yale would fail to make anything happen, closing out the incredible Harvard comeback that saw them celebrate with their fellow students who’d rushed the field.

“There was good karma today, it really came around,” said Harvard Head Coach Tim Murphy. “Our defense played well at times, and when the game was on the line our kids rose to the challenge and made plays they’ll never forget.”

On the meaning of this game today Murphy noted, “I’m not sure there’s a better rivalry in the country. If there’s ever a more exciting finish to a Harvard-Yale game, I hope someone else is coaching it.”

While 2020 robbed the college football world of “The Game”, 2021 made sure to make up for lost time. And while neither team ended up walking away with a share of the Ivy League title, being able to play in front of 49,500 fans in what will go down as one of the best Harvard-Yale games in its history has to be a pretty bittersweet feeling.