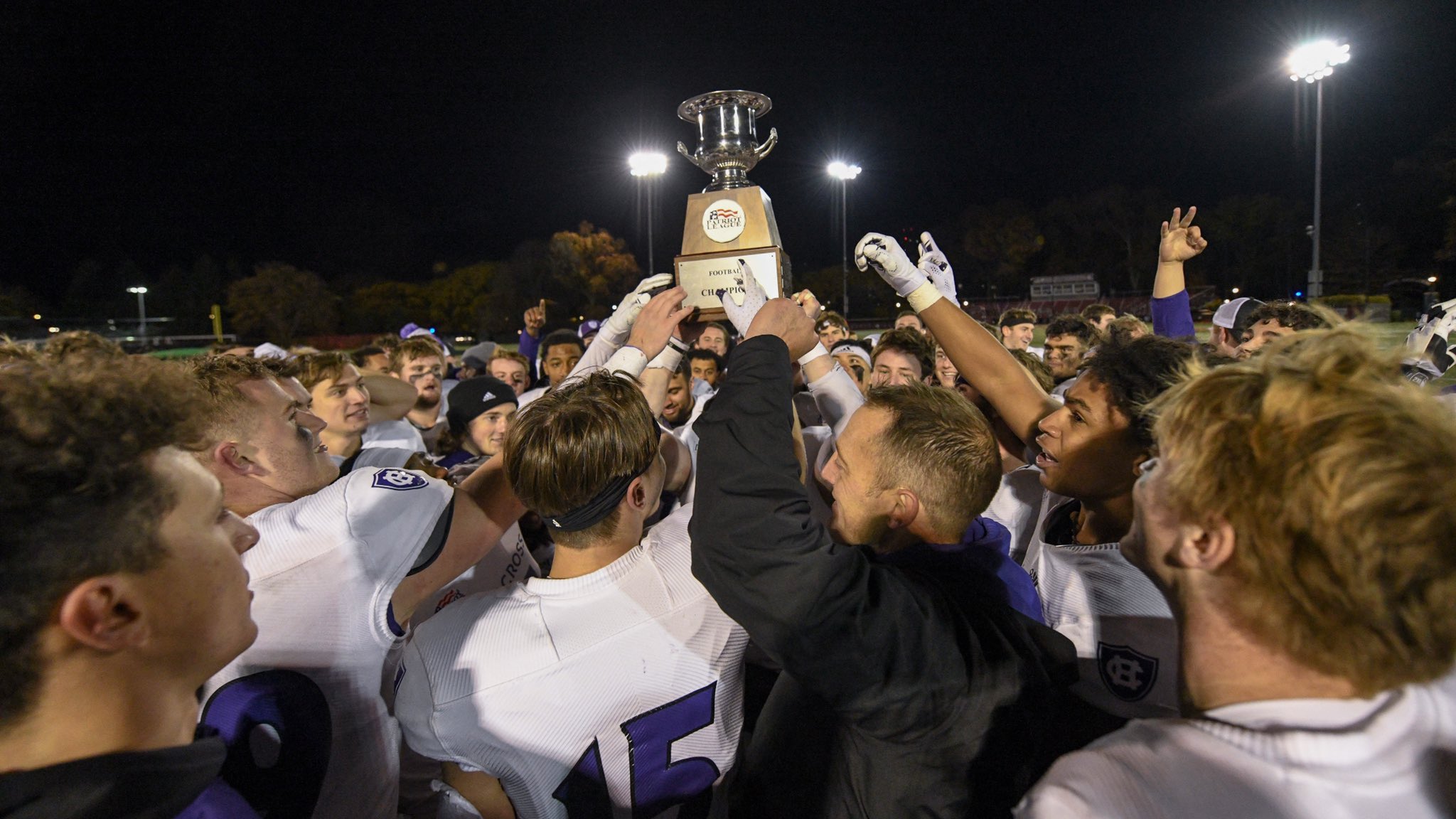 
Last weekend, the Holy Cross football program was able to celebrate something that hadn’t been done in 30 years.

With a 52-24 win that saw the Crusaders score 35 unanswered following a lightning delay that lasted over an hour, Bob Chesney, his staff and the players clinched a third straight Patriot League title, the first time the program had done that since winning back-to-back-to back league titles from 1989-1991. This was the program’s ninth Patriot League title and put the Crusaders at 8-2 with one game against Bucknell remaining this weekend.

With a berth in the 24-team, single-elimination tournament already secured, Holy Cross has a significant chance to earn a home playoff game at Fitton Field next weekend a dominant win over a 1-9 team probably just looking to get home for Thanksgiving. The Crusaders can also finish perfect in the league (currently 5-0) which would extend the team’s current five-game winning streak. Holy Cross hasn’t lost since the ugly day at home against Harvard and they’ve now scored 48, 42, 31, 35 and 52 points during that run.

No one in the country should want to play in Worcester next Saturday with this group of guys feeling as confident and loose as they do right now.

“I thought playing the weather, keeping our poise and going into that lightning delay…it was pretty awesome, Liam Anderson’s in (the Fordham gymnasium) playing stick ball with a piece of the wooden floor they’re ripping up in there,” said Chesney earlier this week. “They were so loose, they were so committed and excited to get back out there. They weren’t stressed…our coaches found some creative ways to make adjustments and then when we came back out it was obviously very different.

“Very proud of the resolve and the poised they displayed, their execution and then the coaches’ ability to adjust and adapt during that delay.”

With Matt Sluka slinging the ball around and scoring four total touchdowns to go along with a career-high day from a passing yardage standpoint (272 passing, 104 on the ground), this team also has that very dangerous quarterback that winning programs ultimately need. Jalen Coker and Ayir Asante are capable of making big plays at receiver at any point and with Peter Oliver carrying the rock along with freshman Jordan Fuller (3 TD vs. Fordham) getting some touches it’s hard to match this offense.

Defensively, Jacob Dobbs continues to lead the way at linebacker with guys like cornerback Devin Haskins and defensive end Jake Reichwein making plays among many others. The odds of a team being able to stay in a shootout with the Crusaders are slim-to-none right now.

Almost immediately after realizing his team was about to win a third straight league title late in the fourth quarter, Chesney was balancing the emotions of the day with planning ahead already.

“There’s a gratifying feeling I think for everybody and then there’s this cool emotion, but I do think also at this level, as much as that happens, my brain switches pretty quickly to, ok we’ve got a game at Bucknell next week,” Chesney said of the reaction and emotion after the clinching win. “How are we going to handle that? What do I say here to make sure we don’t mess this up? Then, we have a game after that, we’re guaranteed another game after that, so just how challenging is that going to be? As a coach it’s just never ending.”

During last season’s strange spring schedule, Holy Cross actually beat Bucknell in their home stadium for the Crusaders’ second straight league title in the first ever Patriot League championship game. Chesney acknowledged that was probably why the score looked the way it did at the end (33-10) as his guys were extremely motivated to repeat, but looking past the Bison now would be a crucial mistake.

“Four years ago, they won one game and it was against us here,” said Chesney. “I think the next year we went down there and they gave us absolutely everything we could handle and we barely squeaked out a victory. Last year, that was a bit different. That was for the championship and I think our guys had some outside motivation that really had them driven to succeed in that game. Our guys just came in with a different demeanor that I think we’ve been playing with ever since

“The (Bucknell) quarterbacks, the running back – really good – the receiver No. 1 is phenomenal and then you have this multiple, aggressive style of defensive play that presents a problem to anybody. You never know what you’re going to get. They can hurt you and that’s one thing our guys certainly understand.”

It’s hard to imagine Holy Cross stumbles in this game with a chance to make a statement to the FCS committee that Fitton Field deserves to have a playoff game on a beautiful fall day next week, but Chesney isn’t taking anything for granted. The Crusaders will be ready to go when they take the field in Pennsylvania.

“What better team to do it (against) here’s your senior game for some of those guys that won’t play again, what a great opportunity for them to say ‘let’s take out the three-time champion right now and have that forever be remembered,” Chesney said.

“That’s something we’re fully aware of and fully preparing for.”