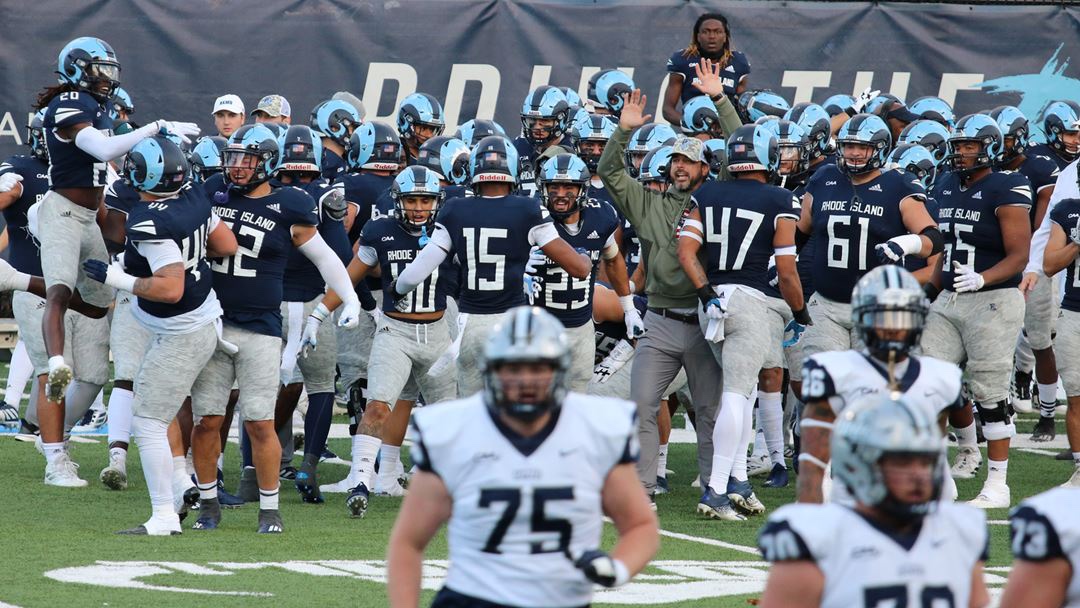 KINGSTON- The Rhode Island Rams were feeling pretty good about themselves after picking up their second ever FBS win a week earlier against UMass. It was important that they built off their 35-22 win over the Minutemen and they did with an impressive 28-3 win over New Hampshire.

The Rams scored on the third play of the game when quarterback Kasim Hill hit freshmen running back Jaylen Smith along the left sideline on a swing pass. Smith did the rest going 81 yards for the touchdown.

The two teams exchanged punts on their next two possessions. New Hampshire was able to put together a good drive at the end of the first quarter that stalled at the Rams four yard line. The drive culminated in a 20 yard field goal by Wildcats kicker Sean Lehane.

The Rams responded with an 11 play, 55 yard drive that stalled and resulted in a missed 24 yard field goal by senior kicker C.J Carrick. Despite the miss, Carrick became the school’s leading all time scorer.

Despite both teams struggling to move the ball in the first half, the Rams did respond right before the half putting together a drive that was capped off by a six yard touchdown pass from Hill to Matt Pires. The Rams took a 14-3 lead into the locker room.

The Rams would add to their lead in the third quarter when Smith would score his second touchdown of the day on a two yard pass from Hill.

The precocious freshmen had quite the day for the Rams. Smith carried the ball 18 times for 117 yards and caught 3 passes for 88 yards and two touchdowns. It was a day to remember for the young man from Pawtucket.

The Rams would add some insurance in the fourth quarter when Hill would throw his fourth touchdown pass of the game to senior wide receiver Ivory Frimpong. The 20 yard connection cemented a career best day for Hill in terms of touchdown passes.

After the game, Rams coach Jim Fleming talked about what the win means to his team and how the program has earned the respect of the conference.

“I think you’re selling us short if you don’t give us respect. I don’t feel like we think that’s there all the time. People look at us all year long as a flash in the pan or oh they got lucky. We’re playing our best football right now.” Fleming added-“We hate the middle of the season. We didn’t play as well as we can but we’re pretty fortunate. We get to get on a plane and go down and play Elon in North Carolina. We’ll play that one and hope we can continue to play more games.”

For UNH coach Sean McDonnell, it was a tough loss because the Wildcats continued to do things that have hurt them this season.

“We are not concentrating on the simple, little things before the snap even happens. We’re getting a bunch of procedure penalties.”

McDonnell added-“There were a couple of penalties on the defensive side of the ball … the late hits, the targeting stuff. It’s undisciplined and it’s disappointing. It’s hard to see when you put that stuff on tape.”

The two teams wrap up their regular seasons next week when the Rams (7-3, 4-3) travel to Elon. The Wildcats return home (3-7, 2-5) to face Maine in the traditional Battle for the Brice-Cowell Musket.