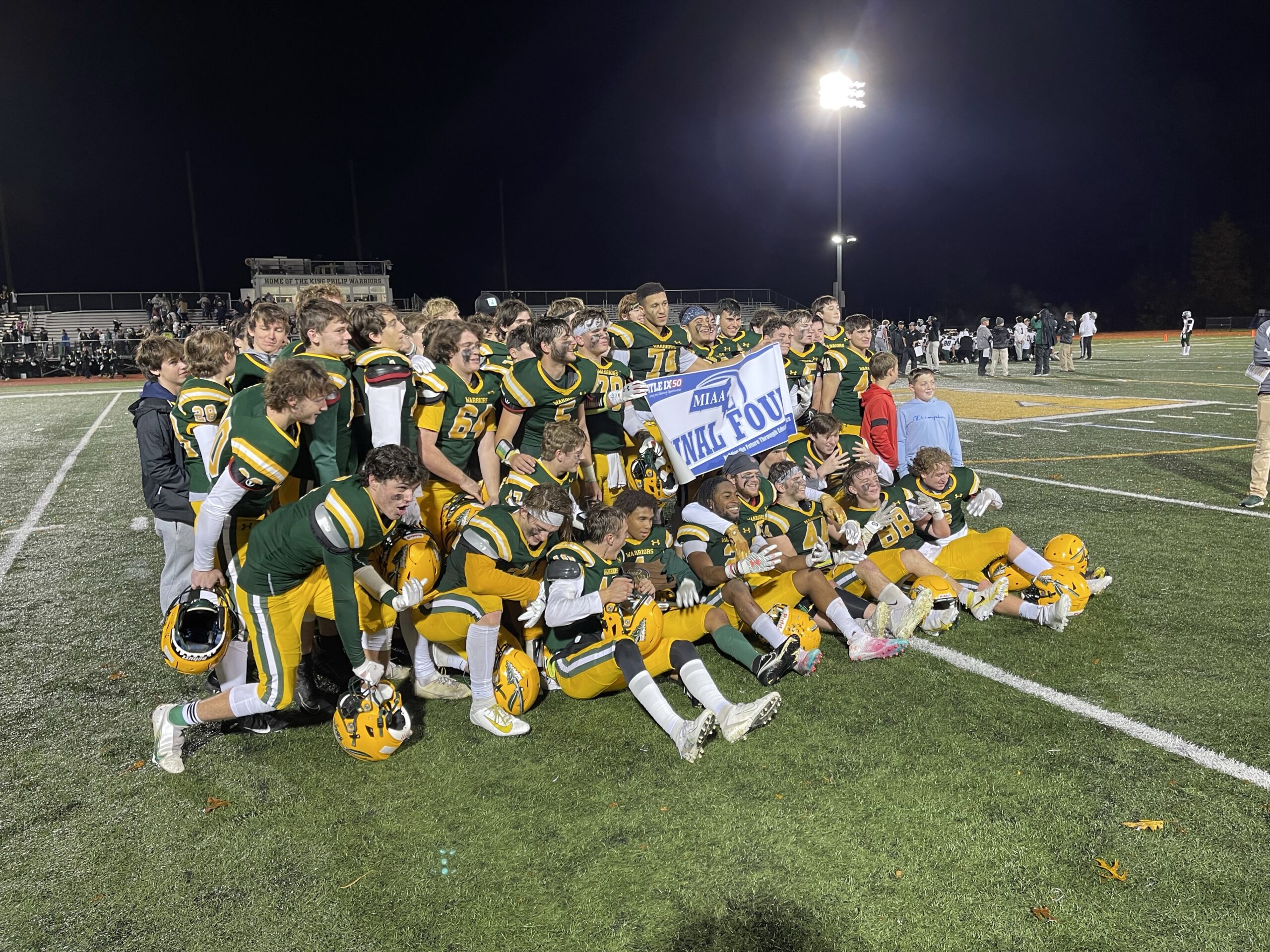 WRENTHAM- King Philip and Mansfield met for the second in three weeks and the second installment of the best rivalry in the Hockomock League did not disappoint as the Warriors gutted out a 21-14 over their rivals.

With the win, the Warriors will face another Hockomock team in the Division Two semi-finals when they face off against Milford next week.

King Philip got off to a fast start scoring on their first possession after a bad snap by Mansfield gave them a short field. Junior running back Rudy Gately capped off the drive with a short touchdown run to give it home to give the Warriors an early 7-0 lead. Mansfield responded however on their next possession with a score of their own when sophomore Drew Sacco scored on a five yard run to tie things up at seven apiece.

The Warriors got the next score on a 37 yard touchdown pass from Charlie Grant to Danny Clancy. King Philip would take a 14-7 lead into the half.

The Hornets however responded in the third quarter when they put together one of their best drives of the night despite having three false starts on the drive. The scoring march was capped off by Connor Zukowski 10 yard touchdown pass to sophomore wide receiver Trevor Foley.

King Philip Coach Brian Lee knows the Hornets resolve and ability to bounce back all too well.

“It was like you luck out and you have a good game against them the first time and you’re like, ‘Alright now we’re going to see them again. They’re going to be angry,'” Lee said. “It’s like when you kick a hornet’s nest, it’s going to come back at you and, you know, Mike’s (Redding) been in too many big games and he had them ready.”

Lee added. “They were able to throw the ball and do some of the things that they had trouble doing last time, and much improved.”

With the game tied at 14-14 going into the fourth, a hero would need to emerge on both sides to give their team an advantage. That hero was King Philip senior captain and starting cornerback Jonathan Joseph.

Joseph would pick off two passes down the stretch. His first interception was a spectacular diving interception which gave King Philip the ball in Mansfield territory. The Warriors capitalized by putting together a drive that was highlighted by a big Crawford Cantave catch down the right sideline and a Rudy Gately run that gave them a 21-14 lead.

With the Warriors trying to hold on for the win, they got an opportunity late in the fourth quarter to pad their lead but Matt Kelly’s 24 yard attempt was blocked and recovered by Mansfield on the 29 yard line.

The Warriors defense would once again need to come up big and they did. Four plays later, Joseph picked off his second pass of the game with 1:20 remaining to seal it for the Warriors.

Joseph talked about what this game and performance meant to him.

“I didn’t want my last game here to end with a loss, that’s all I was thinking about the whole game,” Joseph said. “I wanted that first one so bad, I wanted the game to be over there. On the second one, I was just thinking just do it again. I trusted all my teammates out there.”

With the win, the Warriors advance to the Division Two semi-finals where they will face another familiar foe, Milford. The Warriors handed the Hawks their first loss of the season in Week 6, 17-14.

“Milford is definitely feeling it, they got a big win over Natick,” Lee said. “Coach (Olson) has done a great job with that program, turned them around, and made them a contender right off the bat. So it’s on.”

A date and time for the game hasn’t been announced yet.