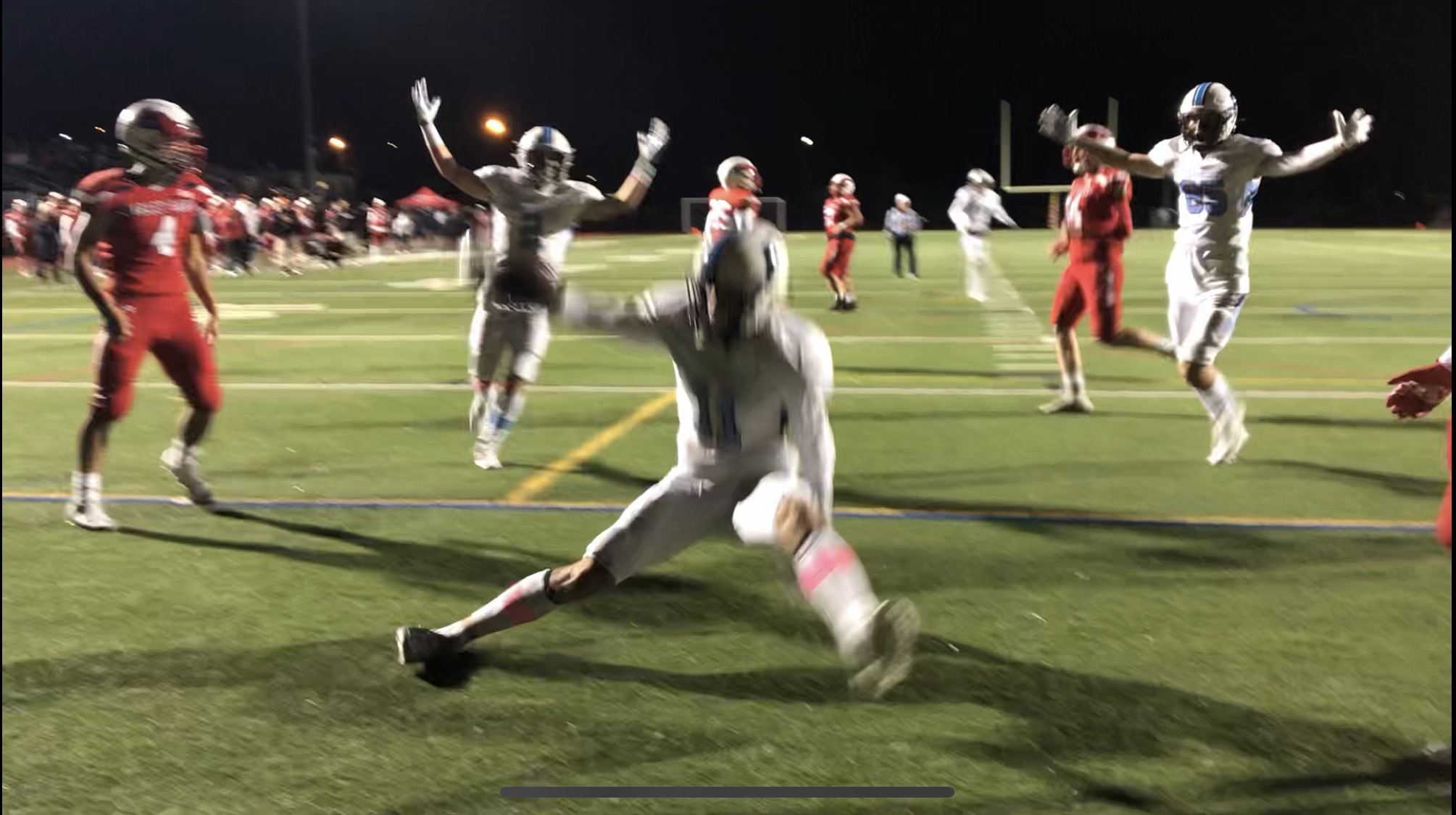 MILFORD – When Franklin and Milford took the field on Friday night for a game that was an ultimate statement game for both teams to close out the regular season, no one in the packed crowd believed it would be a defensive struggle.

That’s exactly what the massive student sections, parents, teachers, alumni and everyone else on hand got though as the Scarlet Hawks and Panthers dueled in a low-scoring affair rather than the shootout that so many thought was coming.

In the end, it was Franklin grinding out a 13-3 win. The Panthers remain unbeaten (7-0, 4-0) heading into the postseason next weekend and also set up a Thanksgiving Day tilt with King Philip to determine the division winner. Milford (6-2, 2-2) will head back to the drawing board before the playoffs begin next week for them too.

“I think sometimes the games just sort of dictate themselves early and there was a lot of feeling out early,” said Franklin coach Eian Bain. “I thought we had a couple chances to score in the first half and we didn’t capitalize…two great defenses tonight. I think we’ve both done well against all of our opponents and I thought that (the defensive game) might be the case.

“It could have gone the other way too, so it was what it was.”

The teams combined for 9 possessions in the first half but still only scored three points each. Franklin got on the board first with a 19-yard field goal from Garrett Portesi 10 seconds into the second quarter. The Scarlet Hawks answered the next drive with a 28-yard boot from Nick Araujo to make it 3-3 with 7:21 to go in the half.

The Panthers got a huge 73-yard catch and run on the first snap of the third quarter from Shane Kindred setting up a 3-yard touchdown pass from Jared Arone to Will Tracey to make it 10-3. With two of Milford’s top receivers playing hurt the offense struggled to move the ball throughout the night and Franklin took the 10-3 lead to the fourth.

A 25-yard field goal from Portesi with 6:40 left pushed it to 13-3. With 4:45 remaining, Luke Davis picked off a pass in the end zone. Prior to that, Milford quarterback Evan Cornelius hit Jaden Agnrew for a big 41-yard play just to get Milford into the red zone, but the interception soon followed thwarting any chances the Scarlet Hawks may have had at a comeback. Mack Gulla (35 carries/200 yards) then finished things off in the final few moments with some bruising runs.

“It feels good, feels good to be undefeated,” added Portesi, who acknowledged when the game is clearly playing out as a low-scoring affair there’s a bit more mental focus that needs to take place. “t’s a lot of pressure, but I’m happy with my teammates, they got me close to the field goals so it made it easy for me.”

Bain also talked about the important performance from Portesi and how he just tries to stay out of the way of any kicker.

“I think you saw two of the best kickers around,” he said. “Garrett was a soccer guy and came out for the first time last year. He’s still kind of getting the hang of it. He’s just a kid that works hard. His work always looks different, but he’s always working, working working.

“I just stay out of the way. I don’t really know much about coaching kicking so just let them do their thing. You’ve got to just trust the kids that put the work in and that’s what we did.”

As for Gulla’s performance to crush clock in the fourth quarter, it was business as usual for the moose of a running back.

“When you have talent and work hard you put your body in a good position to last for four quarters and seven games into the year,” Bain said. “There’s a lot of kids out there that work really hard, but when one of your best players is a worker those things happen and he’s kind of built that up for himself.”

The entire Panther program has worked hard to get to the point where they are considered a legitimate state championship contender and now after the statement win on Friday night, it’s hard to think of a reason why the Panthers can’t complete this special season.

“I think it’s (a special season) because our record is great, but we saw glimpses of this in the spring,” Bain added. “I think we were pretty confident then and obviously we’re doing some things now being able to handle some situations better with a seasoned group. We’re not the biggest team, we’re not always the fastest team but we’ve got really good grinders and hard working kids.”