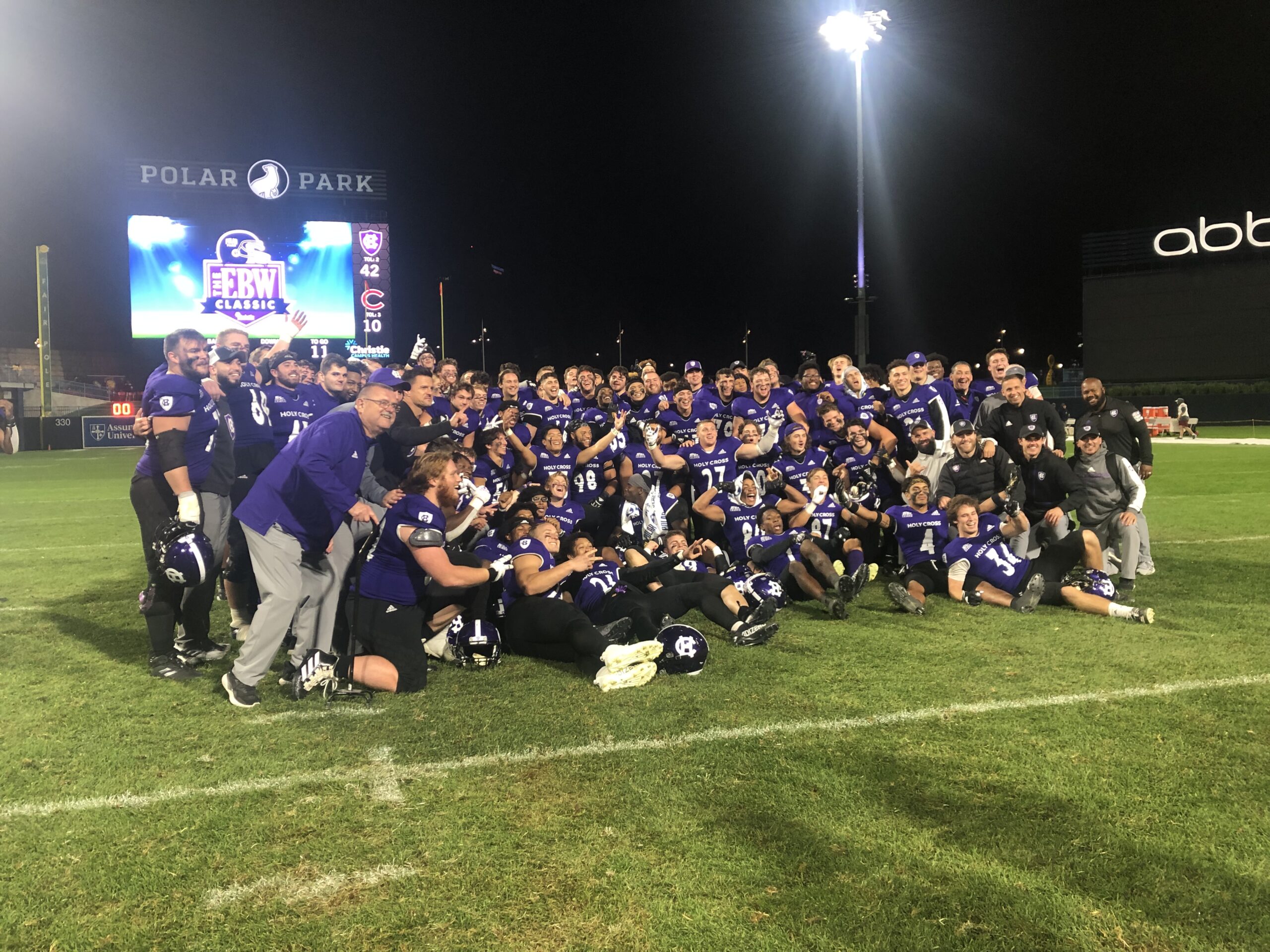 Playing in the first ever football game at the brand new home of the Woo Sox in Worcester Polar Park, Holy Cross waltzed to a 42-10 victory over Colgate. As much as it was a special day full of photo ops and a chance to create memories with family and friends, the win was huge from a Patriot League standpoint too. The Crusaders stay unbeaten in the league at 3-0 and move to 5-2 overall, keeping the dream for a three-peat alive and well.

Peter Oliver was named the MVP of the game dubbed the EBW Classic. Oliver rushed for 153 yards and a touchdown in the win. Quarterback Matt Sluka also had a big day on the ground, gaining 123 yards with two rushing TD’s.

After a week of preparation, routine changing, walkthroughs, hype and anticipation, head coach Bob Chesney was thrilled with the way everything turned out.

“You’re always nervous as a coach, are we really going to be able to handle this?” said Chesney. “Are we going to be able to put it all away and just know there’s still football to be played? I thought our guys did exactly that. We came out with a fast start and a strong finish which is what we’re always hoping for.”

Fast start would be an understatement. With only some of the eventual 9,508 fans in their seats, Holy Cross received the opening kickoff and needed just six plays to move 75 yards with Oliver rumbling in from the 24 just 2:18 in. Derek Ng added the PAT for the quick 7-0 lead.

After a Jacob Dobbs sack on third down forced a Colgate three-and-out its first possession, the Crusaders were soon back in the end zone when Tyler Purdy punched in a 4-yard TD run.

“I love when we start on offense,” said Oliver. “It’s pedal to the metal and see what happens.”

The game remained 14-0 until Colgate recovered a muffed punt at the Holy Cross 7-yard line. Three plays later the Raiders kicked a field goal to cut it to 14-3 with a little over six minutes left in the second.

A huge 33-yard run from Oliver on 4th-and-1 set up a 3-yard touchdown run for Jordan Fuller to make it 21-3 late in the second, but Colgate’s Will Gruber ran back the ensuing kick off 99-yards for a touchdown and the Crusaders went into halftime after a late turnover on downs leading 21-10.

Things got weird in a hurry to open up the second half. A pooch kick off by Holy Cross was muffed by the Raiders and HC recovered at the Colgate 35. Sluka broke off a 35-yard TD run on the next play to make it 28-10. One play after the next kickoff, Liam Doran tipped a pass at the line and Liam Anderson picked it off at the Raiders’ 18. Sluka ended up getting picked off at the two that drive, but Holy Cross eventually took a 35-10 lead into the fourth quarter after Ng threw a 9-yard touchdown pass on a fake field goal to Cullen Honohan late in the third.

“Wasn’t that awesome? That was awesome,” Chesney said with a huge grin. “The best part about it is, we felt like it was going to be there because of how good they are and how hard they rush off the edge. He had to read one guy and he did exactly that and there was someone in his face. He threw a beautiful ball to Cullen who came down with it, that was probably the straw that broke the camel’s back that we needed at that time.”

John Smith and Cristos Argos had interceptions in the fourth quarter and Sluka added one more 8-yard TD run late to close things out. After a kneel down from Joe Pesansky who took the final few snaps, the Crusaders posed for a picture on the field after the game, went over to sing the fight song with remaining friends and family and then lingered on the field with those same folks taking photos, laughing and taking in the historic moment on a perfect fall New England night.

The only problem after an event like this is the fact that there is still a lot more football to be played, but the Crusaders believe they’ll remained focused after such a draining week.

Holy Cross did a lot of things well on Saturday night and because of it, they made memories for those that bleed purple that’ll last a life time.