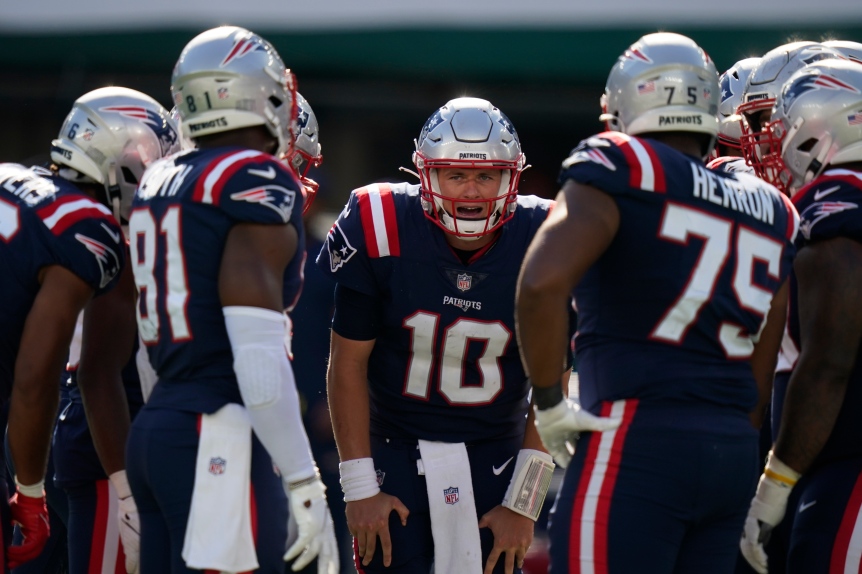 Despite the loss, I think just about everyone agrees that Mac Jones passed the Tampa Bay test in terms of being able to handle the bright lights and everything else that came with the game during that wild week.

Now, Jones is facing a similar yet completely different type of test when the Cowboys visit for another national TV game and a 4:25 kick off on Sunday. Just the star logo and name Dallas Cowboys automatically means more eyes will be on the game. Jim Nantz and Tony Romo will be here calling it for CBS and Dallas is currently riding a four-game winning streak. Dak Prescott and the offense – aside from a bit of an early let down against the Giants last week – has been humming and with the offensive line still pretty banged up for New England, it’s going to be important for Jones to match touchdowns and not field goals with the Cowboys. At least when Brady came in Jones had Belichick’s 20 years of experience with Brady to help slow them down.

“Yeah. They have one of the best offenses in the NFL, and you just have to go toe-to-toe and try and just compete and focus on yourself, but they do a great job,” Jones said this week when asked if there’s extra pressure on him and the offense this week. “I don’t watch offensive film, but I’ve seen some crossover film, and they move the ball well, and they’ve got great players. We just have to play our game and realize that, like I always say, it’s 11-on-11, and our offense versus their defense, and when we switch, they’ll be going against our defense, so that’s as simple as it needs to be.”

The rookie continues to say all the right things and aside from throwing some pretty horrific passes that should have been picked off in Houston, it’s hard to deny he’s improved week-to-week. The game-winning drive was huge for his confidence moving forward, but he’s seemed pretty damn confident since he was drafted despite quite a few doubters still getting all over him. This game could go a long way in proving he can elevate a team around him despite having lackluster pass catching options at his disposal.

Jones continues to do self assessments daily and perhaps the best thing fans can hear from him right now is that he knows what he’s doing wrong, it’s just a matter of improving with more reps. It’s not like he’s completely clueless out there as a rookie.

“I’d say just sticking to my reads and following what they’re telling me to do.,” Jones said when asked what he thinks he needs to improve on. “It’s not that I don’t know what to do. It’s just, sometimes, I might skip something or see something. I just need to stick to what I’ve been taught and do it and just play. At the end of the day, you can’t go out there and have sticky fingers. You’ve got to kind of react and play how you know how to play. Sometimes I might see something that some people don’t see, but at the same time, when we watch the film, we always get back on the same page, and I’ve just got to do a better job of that and realizing that they don’t have to touch the ball. You can do other things, throw the ball away, whatever, just to make sure that doesn’t happen.”

If the offense looks like it did against Houston then there’s a good chance the Pats will be 2-4 around 8 o’clock on Sunday night and the doubt about whether Jones can truly be the guy will grow louder and louder. I don’t believe that will be the case and I think Jones has the ability to make players around him better. I also think the team has played down to competition so far this year.

The kid was in big spots with Alabama and answered the bell in his first big time start against Brady and the Bucs. Nothing says “big game” like the Cowboys on the marquee so hopefully, Jones can prove those of us that believe in him right and if he does, suddenly the 3-3 Patriots with the Jets up next become a dangerous team again.

“I think just staying positive,” Jones added when asked about the offense picking each other up when things haven’t gone smoothly. “Just talking with each other and realizing that we’re going to mess up, and it’s not going to be perfect, which is hard, but I think we do have guys on our team that, obviously, want to have fun. We realize that the fun part is the winning part, so when we do that, it’s fun. When we don’t, it’s not, so that’s what it comes down to.”